The World Turned Upside Down: Buster Keaton, Sculpture and the Absurd - a-n The Artists Information Company 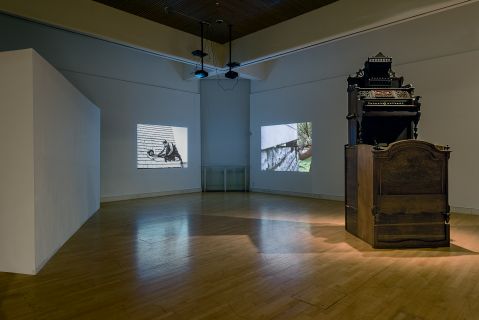 The World Turned Upside Down: Buster Keaton, Sculpture and the Absurd is one of those exhibitions that sticks in the head. It has gone around and around in mine since I visited ten days ago. Artworks and particularly their placement to each other, directly and by association, has subsequently set off mini-fireworks in my mind. I wonder if this was made consciously (or unconsciously) more so because of the constant presence of Keaton as a reference when walking around the gallery. He is there in every work, but in some ways he is also a misnomer; Keaton is both an activator for new meanings and threads, but also is a reference point that could easily have closed down richness and complexity if the show had not been selected and curated so superbly. In other words, having Keaton as a linchpin for the show was risky and could have overshadowed everything. Fortunately the other two subtitles for the show, ‘Sculpture’ and ‘the Absurd’ are two of many other possibilities in what could have been a long list, a signal to the opening up that is inherent in the show. Instead Keaton’s presence has created a unique and challenging (model for an) exhibition and one that I personally feel should be more widely disseminated through touring/a publication.

Keaton’s influence seeps through to all of the work in the show through various linked and intertwined themes. Ruth Proctor’s Ok, Set, Drop is perhaps closest in tone. The artist is seen falling from a scaffold tower onto a set of cardboard boxes, props that would be more usually hidden from view in Keaton’s silent films. In the artist’s hand though the gag is amplified and explained by the boxes sculptural presence in the space, and the use of the scaffold tower to display the monitor.

The Mead Gallery has a distinctive L shaped space, resulting in six corners, one of which stands proud in the space like an exterior wall and the other five being more familiar to interior spaces. Three of the corners in the Mead Gallery have been energised by three pairings between a Buster Keaton movie and an iconic artists films. Familiar works by Gordon Matta-Clark (Splitting), Fischli & Weiss (The Way Things Go) and Bas Jan Ader (Broken Fall (Organic), Amsterderdamse Bos, Holland) are re-energised and seek re-evaluation by these new, mirrored relationships. Conversations and dialogues between artworks abound throughout the show, but this is most acute between this link up between Keaton and these artists.

Matta-Clark’s Splitting, in particular, is seen anew when put in combination with Keaton’s One Week. On one side we see Keaton increasingly absurd failure to move house, eventually leading to his house being pulled by a car on barrels before getting stuck and destroyed by a passing train. On the other we see the equal master-craftsman, Matta-Clark, slice a wooden house in half and carefully rest it on it’s slightly reduced (one layer removed by the artist) stone support. The to-and-fro of the viewer’s head between the two films results in each become entwined with the other, both conceptual and narratively.

Sculpture was present in the display of nearly all the other film-works in this carefully curated shows, with lots of cube monitors shown on their packing crates, Richard Wentworth’s film, Making Do and Getting By displayed on a folding ladder and Emma Hart’s triangular shaped wall. Hart’s piece was particularly effective in engaging the audience, as the wall created a back-screen projection space that hovered a couple of feet from the wall, forcing the audience to squeeze into the space between wall and her film. LOST featured a miniature camera searching the crevices and cracks of a home, revealing a hidden world, one that is magnified and almost uncomfortably close.

The sculptural presence continues through to Ben Woodeson’s piece, with it’s underlying potential for menace and harm in the form of a huge pane of glass, precariously balanced on a workbench. The title, Fuck You You Fucking Fuck, only adds to danger inherent in this piece, and in fact much of Woodeson’s output. Positioned with Keaton though, this feeling is amplified to the very real potential for an event, as I waited for the accident that was waiting to happen in this health & safety two fingered salute of a work.

Slapstick unsurprisingly featured strongly in much of the show in artists such as Wood & Harrison, Roman Signer, Marcel Broodthaers and Miranda Pennell. This side to the works was linked in all cases to a wanton abandoned and a celebration of failure (it was no surprise to see many of the artists in the show also feature in Lisa Le Feuvre’s excellent reader on the subject). Curators, Simon Faithful (who also had another cracking GPS piece in the show) and Ben Roberts have carefully and magically brought together a series of quality works in a quality gallery with a quality premise. Their conjuring trick has been to transport each and every work, many of which I had seen before, into something new and to create a whole exhibitions that is truly more than a sum of its parts. A rare gem of an exhibition, something to be treasured and hopefully kept in the mind.