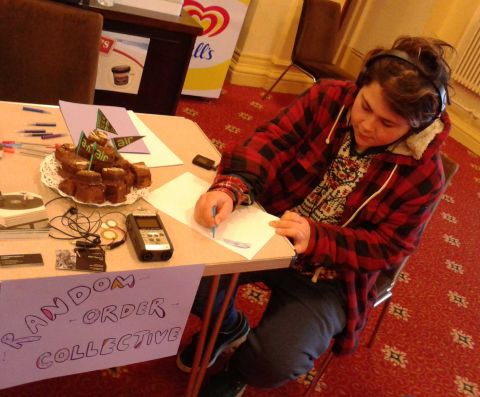 Spending a day at the Art Party Conference in Scarborough organised by artist Bob and Roberta Smith proved an inspiring day full of vibrant conversations intertwined with acts of defiance against government cuts to the arts. In the tradition of party conferences the Art Party took over the Spa Centre as its venue. With its various function rooms, theatres, bars and cafes it constituted a perfect platform for taking stands, both literally and metaphorically. It was not a traditional party conference in the sense of coming up with a united front and programme; we were not a critical mass, a body of artists. The differences between our approaches to art making and life in general were a mosaic of experiences and visions, however, one thing was clear, we did not need to debate the importance art played in our lives and its vitality to our communities, and as such to humanity. Whether the voice of this performative stand will be taken, in any way, seriously by Michael Gove and the parliament cannot be guaranteed and as Cornelia Parker said ‘artists don’t want to run the country – we can barely organise ourselves’. This time we showed up for the first time in the party conference framework (to use the government speech). There were over 1000 artists, teachers, students, kids and locals living the art and its spirit till early hours and breakfast on the beach.

Random Order Collective received a generous an bursary to attend the event. This kind of support is crucial for emerging artists and often makes a difference between being an active participant and an observer who cannot afford to join. It was a pleasure to talk to artists from an, AIR and other bursary recipients. With the university fees rising young people often make choices based not on what they are really passionate about but on what could potentially bring the guarantee of employment in the future. Hopefully, art will not become an option for an affluent elite only and we will not lose the strata of voices and expressions.

Our stand was placed outside the theatre, we also had a balcony overlooking the main stage, so we could watch and listen to the speeches downstairs. Our collective observes sound’s potential to relate to the environment and to open up both collective and individual narratives. Our stand could not have been placed in a better place. We really felt tuned in with our neighbours an artist Gavin Wade representing Eastside Projects and a composer Robert Mackay from the School of Arts and New Media at the University of Hull. Eastside Projects is a free public gallery in Birmingham that focuses on the interaction of an artist and an engineer as the way forward. Robert’s audio-visual installation invited the audience to become composers. The movements of the body were hitting different notes and people intuitively were choosing pitch changes. We had conversations about participatory art and software used in creation of immersive environments such as MAX MSP and pure data.

Throughout the day there were lots of panel discussions, performances and prompts. We found the conversations on what first turned us into art, art education and the importance of art especially influential. Richard Wentworth gave an inspiring talk on his perception of the British educational system, filling us with insights and thoughts on the ‘ideal’ educational system. Even though the audience was posing provoking questions, the room was filled with creative energy of the opinionated participants who had something to say. Furthermore many significant artists like Jeremy Deller and Cornelia Parker shared their experiences on what brought them first to art and on the origins of their inspiration.

Pavel Buchler was quite critical of art language and was concerned that art students are more concerned with being an artist than with making art. The conference showed that there were lots of emerging makers present and we need a common language, and it is new and it feels awkward but if we don’t create a common vocabulary that we can use for the outside world we might lose our chance to communicate in language that policy makers understand. Our visual and performative stands are not less important but they are not always immediately understood by those who do not see art as priority.

Once the speeches and talks finished, the Art Party started! Live performances followed by DJ sets were a perfect grand finale with all the artists taking the floor into the small hours of the night. See you next year?!

Aga Tamiola completed her Masters in Art & Science at Central Saint Martins College of Art and Design in July 2013.Â Her art practice encompasses sculpture, installation, printmaking and sound in order to explore aspects of loss and identity.Â  She tries to give a voice to those who struggle to be heard. In Vanishing Voices she focuses on endangered languages. Currently she addresses issues surrounding the HIV epidemic. She also responds to neuroscientific developments from a neurosceptic point of view.In 2013 she co-founded the sonic arts collective Random Order.