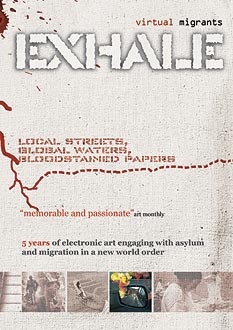 In a short film called Surviving in Shawbridge, a teenage boy from Glasgow tells the camera that he is often called a “black bastard”. Another boy remarks, casually, that the only asylum seekers who don’t get attacked on the street are the ones who hide at home.

The importance of listening and bearing witness to statements like these cannot be underestimated. In the words of Kuljit S. Chuhan, co-founder of artists’ group Virtual Migrants, they ‘cut through the armchair consumption of human rights narratives.’ The Exhale publication – which consists of a DVD, an audio CD and two booklets – documents and reproduces the results of five years’ work by Virtual Migrants with communities and other artists, exploring terms like ‘asylum’, ‘immigration’, ‘identity’ and ‘community’. Sharing a history of immigration themselves, the artists in Virtual Migrants take on the fundamental task of tackling these concepts from the perspective of lived experience. As a result, Exhale vibrates with a real sense of urgency about its subject.

Perhaps also as a result, the projects represented in Exhale differ widely in scope and production. On one end of the scale are discrete pieces by the internationally acclaimed artist Keith Piper, and on the other end are short films produced in collaboration with high school pupils. The DVD and CD include original artworks, films, exhibition documentation, music and interviews, while the booklets feature essays, reviews, responses, descriptions and even the Executive Summary of an audience evaluation document for funders. Exhale not only represents a sustained outpouring of creativity, therefore; it also demonstrates the myriad ways in which this creative activity can be discussed and classified.

With such a wide remit, the artistic quality of the work in Exhale is – predictably – variable. An extract from Piper’s Local-Stranger showcases a use of image and text that is both pared down and powerfully symbolic. The words ‘One [armed guard] observed me’ appear onscreen behind images of wire and windows; in a couple of heart beats, the windows go dark to reveal ‘for a while’. The casual vagueness of this combination frustrates the viewer as much as the process of surveillance insults its subject.

But the short film Long Road Home, made by Chuhan with refugee artists from Derby, overlays images of interviewees and street scenes in a way that becomes distracting. And, despite watching the thorough explanation of its elements in ‘Exposition’, I could not empathise with the film in the installation What if I’m not Real. In some ways it is highly abstract – actors wear masks and move in stylised gestures – but in others it is clumsy and heavy handed – a beaurocrat shakes his pen and red ink (like blood) comes out.

And yet, it does not really make sense to judge Exhale in terms of artistic quality. In fact, Chuhan conjures up a spirited defence to a critic who did just that. ‘This episode,’ Chuhan writes, of an unfavourable review in MUTE Magazine (Issue 29), ‘underlines the pervasive dominance of Western frameworks which provide the baselines and govern the modes of discourse.’

With most of its members educated in the UK, it is disingenuous for Virtual Migrants to claim that they can – or should even want to – escape ‘Western frameworks’ (whatever they might be). The MUTE critic compared What if I’m not Real – with its masked performers in generic roles – to ancient Greek theatre. If Chuhan is asking us not to consider Virtual Migrants’ work in relation to the dominant history of Western artistic practice, then she is asking us not to consider it as ‘art’ at all – or at least, not in any way that I, as a Western woman, can hope to understand.

In fact the problem with Exhale is – how are we supposed to look at it? Part artwork, part teaching aid, part witness statement, part community project, the publication does not fit into any available terms of definition. And, by trying so many out, it just draws attention to the fact that they don’t work. Exhale is not sophisticated enough for the art market, not rigorous enough for academic research, and perhaps not straightforwardly educational enough for teaching. At the same time, the endeavour of Exhale – which brings together communities to explore the way we live in the modern world – is undoubtedly serious and meaningful, to those who made it at least. More importantly, it gives a voice to people whose opinions aren’t normally heard. The formal problems Exhale comes up against exist precisely because what Exhale does is unusual.

It is easy to criticse Exhale. It does not ‘succeed’ in any one form or genre, and it feels (perhaps understandably) prickly and defensive as a result. But to criticise it would be to ignore the fact that Exhale is a victim of a kind of silencing: there is simply no easy cultural place to put this publication. The inclusion of that audience evaluation document reads like a clawing attempt at self justification – it is not enough that the work in Exhale exists, it must also fight for its right to do so. Like the immigrant/ viewer in Piper’s Local-Stranger, Exhale is asked to account for itself before it is granted the right to speak.

Exhale is at it’s weakest when it succumbs to the desire to generalise – a speech about how ‘asylum seekers’ feel is well delivered but essentially meaningless – or protest its own worth – an introductory slide to Piper’s piece primes us with the description, ‘subtle yet provocative’. Conversely, Exhale is at its strongest when it abandons any attempt at explanation, and lets individuals tell their own experience. This is when it bursts out of the ill-fitting straightjacket of generic convention, and shakes us in our armchairs.

Mary Paterson is a Writer and Curator with a specialism in Live Art and performance. As a member of Live Art UK's 'Writing from Live Art', she is involved in promoting critical debate around performance based work. Mary's curatorial projects have explored performativity, political relations and fantasy. She has produced exhibitions of fine art and performance in the UK and Ireland, both independently and as Co-Director of the Curatorial group Art-3.