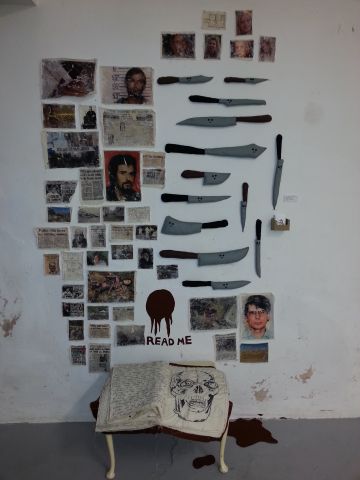 This is part of a series of very short reviews of the most interesting things that appeared in East London this autumn.

Modern Panic is a series of exhibitions curated by James Elphick that have been held since 2009. Modern Panic as a concept originated with and were inspired by the work of the original Panic Movement (Mouvement Panique), which was created by Alejandro Jodorowsky, Fernando Arrabal and Roland Topor. These three artists working in theatre and live art (and later, film) created a number of provocative and shocking live arts events in the 1960′s, with an aim to ‘liberate’ their audience through confrontation with their unconscious and hidden desires. Grotesqueries, violence, sexuality and fetishistic imagery – all were ingredients that the trio used.

Clearly immersed in and fascinated by this movement, Elphick brings this wild spirit into his projects. He made a general call out for artists to put together Modern Panic IV at Apiary Studios – a big job considering how many artists are featured in the programme.

Modern Panic IV inhabits the grungy space of Apiary Studios with a startling selection of extremely strange and haunting art works. It is the kind of art that is rarely seen in London, dedicated to the exploration of art work that revisits surrealism, expressionism and the deep world of dreams and the unconscious thoroughly and relentlessly.

The works themselves are very varied; there is no “house style”. Some of it is Gothic, like the disturbing sculptures of Paul Toupet or the paintings by Jasmine Szu-Ting Chen. Some of it is subversive and political, such as Eleanor Brereton’s life-size sculpture of a very old woman, confronting us head on with age and frailty; Mr Von Hugo’s propangandesque posters; Rhine Bernardino’s film about domestic servitude and most fascinating of all, Lucy Sparrow’s installation about serial killers. Sparrow’s work in all hand-made, much of it sewn textile (including a large book of stitched handwriting) and addresses our cultural fascination with serial killers. The (unusual) female perspective offered here, and the way the imagery is deployed make this a piece that could easily fill an afternoon of perusal in itself.

Despite having such a strong concept this show is the opposite of “conceptual”. Hand craft and awareness of skill is the thing all the artists have in common. Every work shows a deep understanding of their chosen medium. A number of the artists are trained in or work in things like prop-making, and are not primarily ‘fine artists’. (The exhibition documentation could have been better, I had to find out most of what I wanted to know afferwards via Internet research) While some may criticise this approach, I think that it is brilliant – it does two things: it raises the stakes for fine artists, who sometimes get away with not being skilled enough, and it shows that ‘art’ is art, and categories are irrelevant.

However, despite the bounty on offer, the show could have revealed the hand of the curator more powerfully. Clearly there is a curatorial vision, but this should be manifested more furiously. The show feels a bit as if the work has just been brought and installed, and while this is adequate the experience as a whole could have been much more electrifying had we seen a heavier hand in the curation, This is one show where I would like to have seen the “curator as artist” trope manifested. 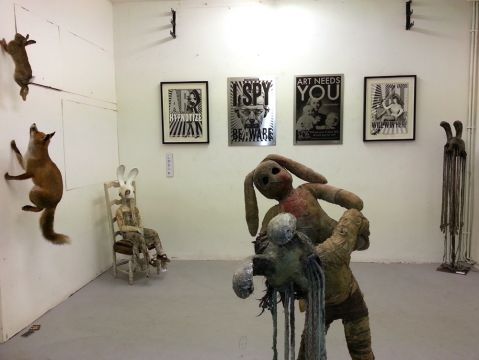