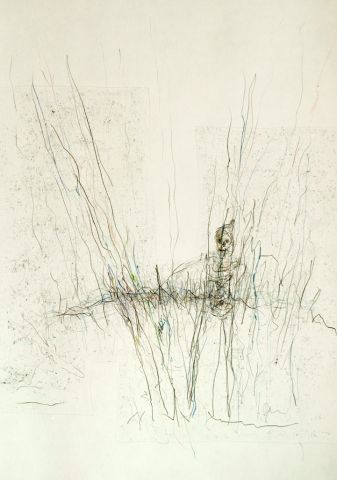 Death Dwarf in Paradise, at Newcastle’s Vane Gallery until March 29th, comprises a collection of ink and pencil drawings on heavy duty A3 paper, punctuated by three much larger, almost monochrome, digital prints.

These constellations of light and shade all feature the death character. In some he is conspicuously rendered, replete with hooded cloak and scythe, looming over the shoulder of a lesser figure, while in others, such as ‘Death Drum’ and ‘Death Dwarf in Society’ he is present only in the title. This bleak content is reinforced by the work’s formal elements. Each drawing is sparsely hung with nails and bulldog clips, while Ebner’s technique of stabbing and slashing at the paper evokes an image of the artist hurriedly trying to capture his vision before it’s too late. Despite this, humour finds a way through: two figures raise a glass to the audience; another walks a dog. If the figure in each of these works is death, then the artist would appear to be mocking him.

The exhibition booklet sheds light on the contextual starting points for this series of new works: The Death Dwarf is a character from William S Burroughs’ Nova Express (1964) whom Ebner has recast as death himself. This character is then re-imagined as the protagonist Hans Holbein’s Danse Macabre (1526), a series of 41 woodcuts, themselves a revisiting of the many murals and paintings on the subject from the early medieval period. The Dance of Death is an allegorical tale in which death takes human form and walks among every social class, waiting to claim his quarry. The message is clear, death pays no heed to social or economic status; he is the ultimate equaliser whose judgment no-one escapes.

As a collection of drawings these works are unified by the figure, whose presence is understood by the distribution and density of markings, yet the scrawled, seeming frantic method of depiction is often undercut by their content – a dancing circle or party scene. In light of Ebner’s research and reference points, these works take on a historical importance, as they attempt to re-interpret the death figure through the eyes of the digital age. The swarming of marks on paper that produce each image, then dissolve and reform to create the next one, calls to mind the fragmented nature of contemporary life, in which identity and selfhood are taken from myriad reference points – our lives are now lived in part in the digital realm, and there is no escaping the fragility of that.

Highlighting the tension between analogue and digital existence, three large-scale prints represent the artist’s attempt to bring to life the landscape of the Death Dwarf. These murky moorland environments, titled ‘Deathdwarfscapes’ were rendered by a digital program. Their relationship with the smaller hand-drawn interpretations of death himself, and the larger pencil pieces, ‘Des Todes Tod’ (The death of death) is jarring, and poses the question: for digital to fully take-hold, does analogue have to die?

I have a new profile under my full name: Trevor H. Smith Contact: [email protected]