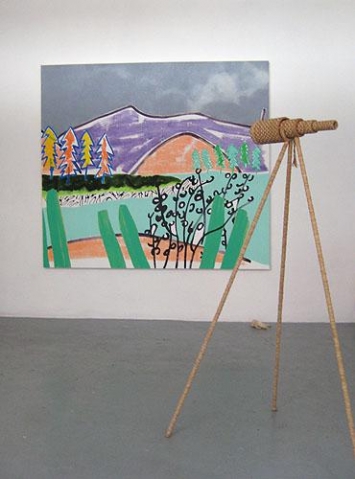 A hot and sultry day, the clouds building and everyone longing for a storm to relieve the tension: walking to the gallery everything was already too much, the city noises and smells strangely concentrated, sweat building clammily on my brow. Inside Rivington Street’s Contemporary Art Projects there was to be no relief, but instead a further intensification, the space jostling a wonky avian menagerie amongst walls with day-glo paints and patterns. Upstairs, when I turn away from the art and seek some respite by staring out of the windows, my gaze is met by a wall of scarlet and pink geraniums whose vivid colours only seem to amplify the works themselves. This show is clearly not something to view from a cool, impartial distance, I am immediately positioned right inside what the artists have imagined.

Experiencing this three-person exhibition is a little like caught being in a dream, when things seem credible and yet always more intense than reality. Debra Swann presents sculptural objects: a telescope made of cardboard and woven elastic bands that absurdly evokes wickerwork; a collection of peculiar birds ranging from tiny chicks to specimens fat as turkeys, made of equally improbable materials; and a skull crafted from paper that appears to be marble and bone simultaneously: I imagine it might belong to a mythical beast. Craig Fisher works on and with the walls of the space, applying larger than life patterns, across which ooze what are apparently blood stains extruded into three-dimensional sculptural reliefs; he creates sinister soft-sculpture replicas of CCTV cameras that loom too close for comfort from their column painted with an assertive dogtooth-check and draped with a (literally) fabricated crime-scene tape made of cloth. J. A. Nicholls, meanwhile, shows very carefully cack-handed landscapes, rendered in smears of fluorescing orange set against sickly green: hung low upon the walls their graphic intensity assaults the viewer.

The show’s title ‘Cut n Shunt’ immediately makes clear that there is something of a mash-up going on here. It echoes with the suggestion of dodgy garages welding together unlikely cars, but the ‘shunt’ reveals that things are more than usually skewed. The artists made a conscious decision not to think of ‘merely’ showing individual works, but to consider the installation as a three-dimensional collage in which the pieces collide and interact. Thus, one has a sense of multiple narratives being generated, stories that can’t quite be pinned down, but which reverberate through the space. There seems to be a tale of murder set against vivid domestic interiors, for which city centre surveillance techniques have been brought uncomfortably into the home. Then there are those odd landscapes with their hallucinatory colour turned up to eleven: a small bird seems to have fallen out of one painting, as if the pictorial had for a moment become magically sculptural. And there’s a persistent narrative of the colonial collector/hunter/butcher of curious species, a character seemingly with a predilection for lopping off creatures’ heads, such that upstairs an ostrich appears to be caught mid-plunge, as if trying an escape via the roof.

There’s a definite and knowing theatricality about ‘Cut n Shunt’, such that, to my mind, it really is correct to describe this as a show rather than an exhibition. The works function as props of a sort, and the carefully considered installation seems to suggest the sightlines and viewpoints of a theatre, as one looks ‘through’ certain works in order to see others. However, I’m up so close to the works that I can see that they are larger than life, deliberately crudely painted, or palpably not ‘usuable’, as in Fisher’s painted light switches and fake fireplace, Swann’s stand-in for a telescope or Nicholl’s psychedelic ‘scenery’. I get the feeling that I am too close, that I have stumbled on stage and into the action, rather than remaining at the safe distance of an audience. It’s a disconcerting sensation. Different registers collide unexpectedly in such a way that the result is not the headache-inducing visual cacophony that it might be, but rather a rich stew of imaginative possibility from which I cannot easily extract myself. Away from the gallery, just as in the moments when I’ve awoken from a particularly vivid dream, I’m left in a curious state where the objects and images I’ve encountered echo with interpretative potential. Despite their very ‘wrongness’, I found myself entirely convinced by them, and this sensation extended the effect of this show into an after-life that persisted long after the summer storm finally broke the sticky tension and washed clean the London streets.