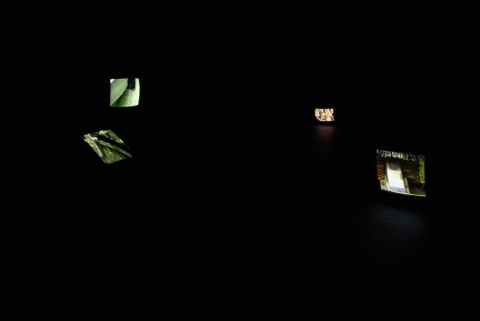 Pitch black. On the floor a line of lights emerge that mark a trail leading towards a dark psycho-sexual place where the desiring machines dwell. Monitors frame excessive machines spinning and spitting green foam. Metal rods and proboscis splash and shoot pale green milk. Copper parts are saturated from above, below and both sides. Repetitive blasts of lube splash against oxidised features leaving no surface unmarked. Weeping and drilled holes seep foamy juice – some of these machines lie exhausted, their holes and openings battered and buggered by hard shiny shunts.

They lie in wait for the next session sodden and sopping: attendant parts to be occupied by different partners in order to form a complex architecture defined by rules of catalysis. They form an open apparatus which extends whenever a machine is added to the group – these machines will not tolerate autonomy. Nothing can remain outside this system of assemblage. The machines must be satisfied. Their systems are impartial.

I witness a ‘De Sadean’ choreography where a productive unconscious is evoked and a materialist psychiatry is overcome. Each machine functions as a microscopic element or substructure in relation to a super machine to which it is connected. A dualism is generated between desire and production, in which central corpuses are held solid, trapped and processed. Non-personal productions of flow emphasise a pure multiplicity where subjectivities are isolated and acted upon.

Beyond any anthropomorphic representations, a microphysics of desire is proposed. These molecular machinic elements, arrangements and synthesis specify an aggregate of sexual activity that is non-human – the act of sex is not a becoming as one or even two, but a becoming that is unquantifiable. Free multiplicities represent a biopolitics where concrete production and human activity coincide. Our desires and labours regenerate endlessly in these scenes of mechano/sexual production.

Connor’s identification and presentation of these desiring machines demonstrates a kind of maternal care that acts as a model of seduction. Such care, in focussing on certain bodily regions, contributes to defining them as erotogenic zones, zones of exchange which demand and provoke excitation in order to subsequently reproduce it autonomously through our internal stimulation that goes beyond abjection. However, this seduction must be resisted. I leave the monitors behind and stumble through the darkness to find an illuminated trail which leads me from this place where endless reproductions of self same patterns occur.

Opening a door to the outside world I am blinded by white light.