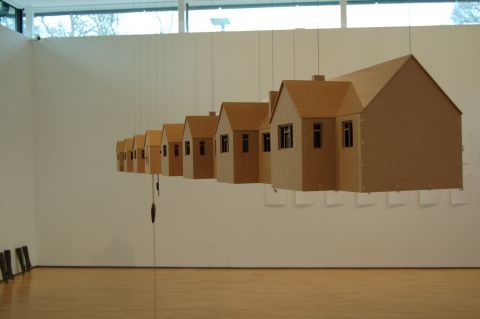 The work charts the idea of a transitional shift in space; moving from rural location to the city in a quest to build an artistic career. This interests me because my own father, born in Dolgellau and brought up in Porthmadog, did exactly this in the 1960s. He left first for Liverpool Art School and then to the Royal College of Art in London, returning to the North West of England to a career in Art Education.

In turn I have decided to reverse this trend returning to a rural North Wales setting having been brought up in a Northern industrial area, but feeling a huge sense of longing for the land of my birth.

Carwyn Evans explores here the idea of migration. His reference to the cuckoo, which here represents the “second homers”, people who have changed the social fabric of rural Wales, is interesting. Carwyn explores this idea photographically with his pictures of immigrant workers closing their eyes and thinking of home. There is something innocent and beautiful about the intimacy of these photos. (Think of Home).

The idea of incomers is an interesting one, because,as someone born in a place and with strong connections to it, it is not always possible to fit in. You are always a bit different, it becomes an issue of identity. Carwyn has produced a body of work that explores the Welsh concept of "Milltir Sgwar", the square mile around your home that you become intimately involved in. In a rural society such as Carwyn's home in Ceredigion, or my own in North Wales, this is based on our experience with the land. It helps to create a sense of belonging or of being related to your immediate surroundings. It grounds you literally. In Carwyn's case his father has a direct relationship with the land, whereas Carwyn's is more an emotional connection. He has made the decision to take flight from his hearth and home to migrate to the bright lights of Cardiff and the possibilities opened up there to artists.

The work all has a modern aesthetic: a series of bird tables with models of his village, a row of houses just like his parents with a cuckoo clock in the centre hovers in the gallery space, a group of tables have been routed like ploughed fields, his parent's arms have been cast in iron to create tools for turning the soil, a series of aerial views of fields have been physically scored and printed as drypoints. I am reminded of William Blake with this artist. He has a connection with his real and remembered environments. All of the work is overseen by a formal portrait of his parents, who act as witness to the changes that have taken place in rural Wales over the past ten years or so: Empty houses, locals living in caravans, migrant workers with little need to learn English, never mind Welsh.

I like this artist, he is mild and calm, political and engaging. He is interested in telling stories which are universal, yet local, and worth telling.