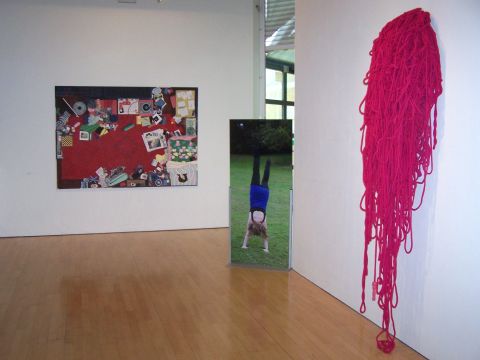 South Hill Park Arts Centre explores ideas about play: making magic and being transformed, passing the time, messing about and making a mess, being yourself and pretending to be someone else, having secrets, making dens, belonging to gangs, creating rules and rituals, taking dares and chances, making and exploring new worlds.

The Bracknell Gallery has been transformed into a nostalgic space where the audience can interact, play games and question truth and reality. Marcin Gajewski’s Human Nature leads the viewer after they enter the arts centre. The film represents a children’s playground: the images of children playing and building sand castles may recall positive memories in the viewer. However soon further questions arise: who is watching these children and why? Is there a more sinister reason to this film…?

Judy Goldhill and Sophie Loss have captured a moment in a young girl’s life in Taking a Position with a life-size photograph. The young girl has no expression on her face; with her hands in the air she is Taking a Position. The artists highlight the ‘limitation of being in one place at one time, pushing as it does the limits of a photograph.’ [1]

The view of Cally Trench’s Territory is unusual, viewing the bedroom from overhead ‘is a kind of land use map of Trench’s teenage bedroom. It was a private territory.’ [2] The painting reflects the way children look down on the worlds that they create: miniature gardens or model railways, their imagination being endless. I wonder whether this is a true representation of Trench’s childhood, Freud would suggest ‘memories based on notions of desire rather than absolute truth.’ [3] It could be argued that neither the photograph nor the painting is a true representation of the time. Perhaps more importantly, is truth important for understanding art and At Play? It is all about mystery and magic.

Pernille Holm-Mercer’s Skipping Rope is bright pink suggesting playfulness and fun. This grand sculpture has lost its function as it is too long to be used as a skipping rope; it highlights the ‘magical potential of the everyday, highlighting the extraordinary possibilities inherent in the ordinary.’ [4] The sculpture transforms the skipping rope, which is an ‘object that speaks of childlike joy and playfulness, as well as of adult frustration and melancholy.’ [5]

This sense of magic is continued in Rosie Gibson’s My brother breathes for me. Gibson has created a film of her performing a loop underwater, going round and round, taking breathes on every cycle out of the water. The sound of the breathing (Gibson’s brother filmed her from underneath and his breathing from the scuba dive is what can be heard) has a calming influence on the audience due to the rhythm of the sound. Gibson is interested in the ‘Phenomenology of spaces’, the projection is shown on a fish tank, so the viewer can imagine the swimmer is in an underwater world, a magical place.

Marco Cali’s Shrooms aims to confuse the audience, as the game itself makes little sense. Played in a large group the players have to concentrate to remember which piece is theirs. It is unlike traditional board games; as players can be switched and games pieces swapped. It throws out any sense of order, which is usually associated with board games, it encourages the participant to be free to play as they desire. Liz Whiteman Smith’s Artoploy, has a different subtle message, although playful, with the obvious connections to Monopoly, it ‘pokes gentle fun at the art world in which success is not necessarily achieved through talent, but rather by playing the game well, through self-promotion and selling the commodity, the artist.’ [6]

Samantha Mogelonsky’s My Archipelago causes further intrigue, Archipelago meaning: ‘a large body of water with many islands,’ [7] the idea of islands sounds romantic, like an escape. However in complete contrast Mogelonsky’s islands are dark, coloured black, with trees, roses and a castle on the largest island. From a distance the trees look like hands reaching out to escape the island. The islands are like imaginary worlds; dream-like; they are ‘humorous and sinister as they seek to investigate language.’ [8]

Imaginary worlds and changing environments is further reinforced with Ingrid Jensen’s Curation Play. The audience is invited to create their own gallery space; Jenson has cleverly created different walls and floors, made small sculptural artworks which are ready to be created into a mini gallery space, ‘inviting the viewer to become part of the work.’ [9] Furthermore Marcin Gajewski’s Merrygoround has the same effect on the viewer, the audience is drawn towards the Merrygoround, and they become involved in the work as they scan the film to see if any other areas are moving. The piece suggests a sense of isolation and captures a moment in time, ‘the video loop addresses the concept of loneliness in the daunting, big world.’ [10]

The concept of isolation is continued in the work of Philip Lee. Sitting Slip was a piece performed at the private view, but the plaster stained clothes and marks on the floor are left as a reminder of what happened. The small children’s chair sits on it’s own in the gallery with Lee’s clothes draped over it. The film playing in the gallery shows Lee sitting on the chair, ‘Lee performs an extreme form of child’s play…there is a pleasure in doing something that an adult is not supposed to do.’ [11]

Cathy Hart and Esther Jervis’s Shape Shifter rests next to Merrygoround, the sculpture looks like it is watching the film, it has ‘a playful nature… alludes surreally to the magic and drama of being a child.’ [12] The figure is ambiguous and the viewer is left to question whether it is an animal or a human.

Aaron Head’s Versus, provokes childhood memories of racing cars around a scalextric track. However as much as Head wants the viewer to enjoy the Play, there is an important message with this piece. Head is commenting on ‘the cyclical time of crop rotation and the seasons have been replaced by the cyclical time of supermarket ‘price wars,’ global markets and supermarket demographics.’ [13]

Moving to the smaller gallery space, Siobhan McAuley’s Faster, Faster immediately catches the viewer’s eye. The bike is ready for the audience to ride, as the participant rides the bike the large wheel in front on them moves like an old fashioned cinema reel, which ‘evokes the magic of early cinematic image.’ [14] The work explores ‘the accelerated nature of our contemporary lifestyle…and the effect on our quality of life.’ [15]

Magic worlds can be enjoyed with the work of Susan Eyre and Restricted views summer and winter. These magical, fairytale lands can be seen through small gaps in an image of a dull, suburban housing estate; the contrast of imagery makes the magical worlds even more wonderful, ‘Eyre is interested in the search for the sublime within the urban environment.’ [16] The work explores ‘the fantasy of the secret garden to create an archetypal romantic scene.’ [17]

At Play at South Hill Park is an incredibly successful exhibition as both young and old enjoy the magic created. Children can play the games and marvel at the wonderlands, paintings and sculptures, while adults can attempt to understand the messages behind the work, and unravel the stories being told. Ultimately the viewer completes the work, the exhibition demands involvement. Reader response critics would argue that the viewer realizes the work according to their own experience, ‘the convergence of text and reader brings the work into existence.’ [18] This involvement creates thoughts and then brings about peoples own realities, ‘no reading can ever exhaust the full potential, for each individual reader will fill the gaps in their own way.’ [19]