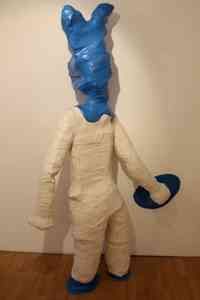 The Bracknell Gallery has been transformed into an area where the Child meets the Adult and vice versa. At Play 1 encompasses the elements, that we as children have all experienced and as adults we forget. The ideas about play: making magic and being transformed,passing time, messing about and making a mess, being yourself and pretending to be someone else, having secrets, making dens and creating make believe. This hands -on exhibition entices the viewer to use their imagination, their emotions, their visual eye, and their sense of adventure and tempts them to get involved.

It is a multi-media exhibition where the viewer can gaze into a fish tank and see a film of the artist, Rosie Gibson, looping continuously underwater, skimming the surface to take a breath at the top of each revolution, creating magic from the mundane while integrating the breath of her brothers ‘scuba diving’ apparatus: Hence the title, My Brother Breathes for Me.

The standing figure with an animal head and unrealistic human form is called Shape Shifter, created by Cathy Hart and Esther Jervis. The installation takes the viewer to another world, the world of sinister, dark magic, story – telling and even make-believe. The figure is attached and glued to the floor and wall, creating a sense of being from the present and yet giving off the appearance of the underworld. In contrast Susan Eyre’s beautiful, serene and colourful scenes, Restricted View (Summer) and Restricted View (Winter), shows the viewer the contrast of the real world from the outside and as they are seduced to peer in through the peephole, where they gaze into a world of peace and tranquility, where their imagination can run riot and they are allowed to be wherever and whoever they please.

In merrygoround, MarcinGajewski, captures play through the concept of video looping. It is the stillness of the scene contrasted with the revolving image of play that reaffirms the viewer that play can ignore the world around it and the outside world can ignore the innocence of play. The individuality of play is strengthened as visitors enter the gallery and are received by a two-sided, life size, photographic image of an adolescent girl who is approaching adult hood and yet captures the frivolity and innocence of play in Taking a Position by Judy Goldhill and Sophie Loss.

At Play 1 has gathered the essence of play through the eyes of an adult and a child and has presented it in a manner that is thought provoking and entertaining.