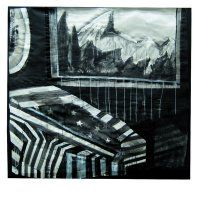 Showing at the Menier Chocolate Factory Gallery at the moment is the Creekside Artists’ exhibition Deptford A.W.O.L., which will be on until Saturday 13 June. There is some good work in this show. Some highlights are Sofie Pinkett’s drawing series Schisms which are painstakingly put together with over layered paper and pencil. Shards of transparent glass and architectural debris break through the surface plane like remnants of a romantic past; they remind me of Friedrich’s Sea of Ice. On the point of collapse or perhaps ruins that refuse to disappear they also remind me of Wilfred Bion’s idea of the ‘little catastrophes’ that the mind has to deal with in its everyday battle to stay alive and creative. Heartbreaking and poignant.

Paul Coombs’ exploration of the portrait tradition has produced some really effective paintings. With a mixture of Baconesque, Bazelitz and cubist techniques, identity is presented as a moving target in our hyper revelatory age. Sometimes grotesque and at others comic he really does capture the fragmentation and vulnerability of the ego. The theme of fragmentation is continued in Richard Waites’s fractured landscapes. In this case the environment wrestles with built structures and he uses a nice mix of painterly techniques to give a sense of the conflict between them. One wonders which will win in the end.

Necole Schmitz’ family portraits have an intriguing quality about them. Drawn from events in her family life they are Gaston like with lots of hoods and his mix of the comic and sinister. That is not to say they don’t have a very original expressiveness about them. That is what I like about them. They pack a powerful punch and are fantastically dark and bold.

A dark but brooding theme this time is carried on in Claire Morton’s large painted interior. I like the motifs in Claire’s painting; they are the stuff of nightmares and she has created some interesting light effects in the work. Caroline Underwood’s work on the other hand has a much lighter feel to it. Concentrating on the materiality of her work, 12 hours of daylight and 12 hours of night are a record of bird flight in the former and star constellations in the latter that she observed during a 24 hour period. These large drawings really show her hand at work and give an echo of the elemental forces in the act of mark making itself. Lovely, ethereal stuff.

Your can see further details about the work on the Creekside Artists website: www.creeksideartists.co.uk and they will be opening their studio over the weekend of 20 and 21 June so you will get another chance to see the work on show here. Creekside Artists, Unit A 110/112/114, Faircharm Trading Estate, Deptford, London SE8 3DX.