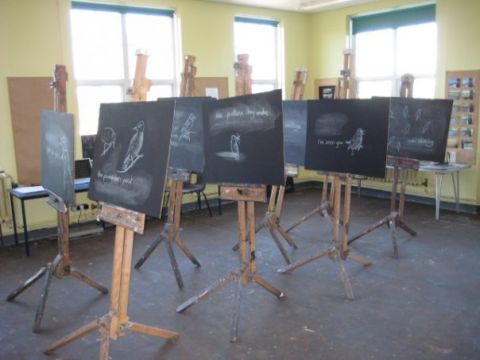 It seems curiously apt that the decommissioned Freda Gardham School should stand on flatlands which were once under the sea. After all, the forsaken building is in the process of being salvaged, as The School Creative Centre, its corridors and classrooms becoming workspace for artists of all kinds.

And reclaimed land is a curiously apt location for artists Roz Cran and Sharon Haward’s most recent project, a four-week residency in one of the former school’s classrooms as, in various interconnected ways, each is making works which toys with the provisional, the written-over, and the likely-to-be-erased.

The pair are here under the auspices of their new joint venture: RUNWAY artists without studios. Formed when they and a group of fellow artists were forced to vacate the studio building they shared in nearby Hastings, RUNWAY is an attempt to maintain the sense of mutual support and collective focus which had flourished there. Perhaps what’s at stake here is, quite simply, the continuation of artistic practice: how to mitigate the potential isolation, or dissipation of being an ‘artist without studio’. How to inhabit a space, an idea, a mode of working, with full knowledge of its provisionality? Or, to put it simply: how to carry on?

For Haward , it seems that this itineracy has always been incredibly important. “All my work is site-specific” she says “it’s all a response to a particular place”. And, she adds “a school has so many ghosts”. A fascination with things which have gone, and a self-professed ‘sculptural tendency’, goes some way to explain the haunting quality of Haward’s work, which often seems to hover between two- and three-dimensionality as a means of evoking lost presences. In her hands, it seems the most mundane of objects can take on ghostly significance, like the plastic school chair whose shadow she has traced in white chalk across the floor and onto the wall. She professes an interest in images which “spill their edges”, exceeding their two-dimensional, rectangular format to travel around corners, or, like the patches of light cast by the afternoon sun, journey across the floor, as she attempts to capture their outlines in chalk. What emerges is a complex, palimpsest-like surface of overlapping versions: shadows, imprints and superimpositions. She points at a portion of classroom wall, which bears numerous traces previous use – tack marks, drillholes and flaking mustard gloss: “I want to work with this” she says “rather than against it”. Earlier, with the help of an overhead projector, she painted the black silhouettes of two schoolgirls onto the wall. Then she returned with fresh eyes and, thinking they looked too definite, rubbed at the paint until it thinned, rendering these double shadows – traces of the shadows they once were.

The action of rubbing out is indicative of the process of experimentation, a mode of working which proceeds through trial and error or, as Cran puts it, simply “changing one’s mind”. This is indicative of both artists’ approach to this schoolroom residency: each in her own way practices a tentative mark-making which operates in dialogue with the act of erasure, and the option of starting (not completely) again. This is particularly apparent in Cran’s extensive use of chalk. Entering the room, I am met by the arresting sight of eight easels, each carrying a large blackboard on which a bird or two has been carefully illustrated in pale chalk. Some are detailed, some mere outlines, but each is adorned by a little imperfection – a smudge denoting the former location of an erased leg, say – and each is accompanied by a phrase written in neat, chalked writing.

Birds have been making appearances in Cran’s work for some time, but it is perhaps only here, in Rye, that they have come to inhabit her practice, and her thoughts, so insistently. Since beginning the residency, she has observed a pair of starlings as they nested in the gables of an adjacent outbuilding, flying to and fro with food for their young. At first, she made drawings of the five eggs (“I imagined there were five”) on five small blackboards and placed them on the windowsill. Later, she ventured outside and chalked starling chicks onto the playground below in blue, red and yellow.

Like Haward’s, Cran’s work here is a response to the location, but one which tends to look outside, to the world beyond the windows, for inspiration. Her process of drawing together small occurrences reflects the way in which birds are a constant, if frequently unnoticed presence in our lives. And despite (or perhaps, because of) their smudged imperfection, the chalked birds speak of dedication, care. The written phrases which accompany these drawings, a mix of birdbook fact and personal observation, have clearly been subjected to numerous alterations – alongside a strutting starling, the phrase ‘walking and nodding’ has been rubbed out (but remains legible, just) in favour of ‘I’ve seen you’, as if the detail became less important than the simple cataloguing of a sighting. It’s this sense of active process which lends the blackboard drawings their peculiar power, and charm: they bear witness to the artists’ evolving relationship with her materials, her mode of working. She tells me she has come to see her practice, on a basic level, as a means of reconnecting to nature. If the chalk drawings act as a means for taking note, making notations, then these marks are secondary to the performative act of noticing. Cran also says she is aware that some of her local audience may, initially, dismiss her smudged efforts as ‘not proper drawing’. So she is intent on devising ways to encourage people to spend more time, in her words, “to learn to look with the work, rather than at it”. For the Open Day which will mark the end of this residency, she has handprinted an A6 postcard which reads –

INVITATION TO STOP AND STARE FOR ONE MINUTE AND TO RECORD ON THE BACK OF THIS CARD WHAT YOU SEE, HEAR, FEEL OR THINK IN WORDS OR PICTURES.

Spending an afternoon in their company, I observe the quiet persistence with which both artists carry out their work. Each moves silently, puts something somewhere, stands back to look, makes a small adjustment, continues. When I ask about the nature of their working relationship, Cran and Haward are clear that it is one of co-existence rather than collaboration. One of the first things they did when they arrived, they say, is divide the space down the middle, assigning themselves a side each. But soon, they found themselves having to re-negotiate the boundary, and its precise location became an open-ended discussion.

What appears to be happening is a very respectful kind of mutual encroachment. Again and again, I find resonances between the bodies of work the two are generating here, independently yet in close proximity. Everywhere there are erasures, shadows, traces, acts of piecing-together. They tell me they don’t have a regular or predetermined format for interaction, and that, often, they’re not in the space at the same time. I get the sense that they’re working in each other’s shadows, amidst the traces of one another’s activity. Referring to the previous day’s visit, Cran says “oh, I see you rubbed your shadow girls out” and Haward replies “yes, I decided I didn’t like them”. And, during a conversation about the weather’s sudden obliteration of Cran’s outdoor drawings, Haward says “yes, I thought of you as soon as it began to rain”.

Chalk is unreliable. For the most part, in today’s schools, blackboards have fallen by the wayside. Certainly, the days in which each pupil rehearsed handwriting, spelling and mathematical formulae on handheld boards is long gone. This older approach to learning operated via repeated writing, rubbing-off, re-writing, accepting this erasure as inevitable, and productive. Following this logic, the material trace is no longer required, as the knowledge has been internalised, has become part of the person, ‘written into’ them as memory.

And this idea is central to the ethos of Cran and Haward’s residency. The acceptance of erasure or disappearance as inescapable, perhaps beneficial, appears again and again in the work they have produced here, much of which will have to be dismantled, partially destroyed, or irrevocably altered when they vacate the space at the end of the month. Both artists have found this enforced end-point liberating: the work they have created here is merely a version, it can be rubbed away, written-over, and rubbed away once more. What remains is a sense of artistic engagement which is developing, ongoing, and constantly refreshed. Through RUNWAY, these artists have found a means of framing and protecting this notion of practice. By imposing stopping points or, in Haward’s words, “assuaging the endlessness” of artistic activity, they fostering continuance, developing a practice along the coast, across the joins. They are managing to carry on.