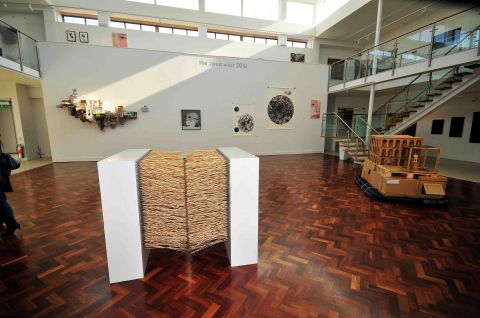 How can an exhibition originally centered as an art prize manage to place attention from poignancy, and what is to be viewed as supremely contemporary, over to an exploration for discrete nuances of expression? The Open West, now in only its second year, differs from the “art prize”; this is not merely a collection of independent visions, and personalities. It is a complex exhibition, with multiple components, which can offer many surprises to its visitors. There are many crossovers between the works; their juxtapositions profit from their accidents and coincidences. Apart from themes such as process and energy, what creates The Open West’s vitality is the sense of invitation, to explore for the enjoyment of exploration, of moving and passing without end.

Organizers Sarah Goodwin and Lyn Cluer Coleman are quickly achieving a unique platform, sustained by an indefatigable scope and vision. Alongside their invited panel, for this year, Terry Duffy, and Clara Clark their selection brings together not only British artists but also Slovenian, Korean, Dutch, and American; hardly a regionally (the West), or nationally focused program. From sculpture, painting, and photography, there are a range of mediums. Increasingly challenging, though, is how the selections and comparisons are to be made between mediums whilst contending with video installation, and especially some of the performance-art/social interventionist projects. One marked “opening” of the prize, as a complex exhibition, is its commissioned project, this year inviting the group Ortelius Drew, lead by artists Doreen Wittenbols (Amsterdam) and Ilga Leimanis (London). After a five day meander through the host city of Cheltenham, Ortelius Drew document a new place, represented by dozens of pictorial renderings based on their discovered sites. This forces the exhibition to be looked outside of its two locations, the Summerfield Gallery (University of Gloucestershire) and the Cheltenham Art Gallery & Museum, and invites a look into an unknown Cheltenham. Lastly, the components of educational workshops, and panel discussions, which seem requisite to many artistic events of this nature, also manage some surprising delights that stem from collaborations. For example, there are some striking photographs of spontaneous sculptures of everyday and miniature combination-objects. Thus brings a full circle, even a vertigo of wonderment, to The Open West’s ambition as an expanded event.

In terms of the prize itself there are three selected winners. Katherine Morgan’s sculpture obliges a participatory aspect, of walking through its canal like structure, rubbing and sounding a showering effect from the bundles of protruding sticks. This reflects one of the exhibition’s predominant crossovers: a concern for the kinetic, process, and almost unseen energies. Trine Olrik’s fragile cardboard cityscapes echo the fragmentary and ephemeral. Uninhabited, the intricate complexity of her spaces “carry” a weight of the air that passes in their midst, reciprocated by the sense of the lightness in these impoverished urban forms. And Sabrina Shah’s paintings provoke a series of carnival-like energies, embedded in the austerity of the surface. But the exhibition still obliges much to be explored, especially when an abundance of participatory and process based works follow, perhaps in an effort to expand their spaces, and the notion of the experiential as such.

Many of these artists are continuously fusing conceptual concerns through an immediacy brought upon by materials and performative activities. Other artists from this year’s selection demonstrate this neoconceptual/arte-poveraesque: seeing a room dowsed in flung plaster (by Toby Poolman), Helen Sturgess’s plasticine (a dark matter crawling on the walls) and a bicycle-vegetation ecosystem collected while Louise Sayerer rode the bike from London to Cheltenham. Sanghee Lee’s construction of a model for spatial design, in this case a proposal for a bridge, plays upon the imagination and forces one to set aside bodily encounters, and imagine what it means to think through space in a heightened experiential form – and to note a non-fine art situation.
As viewers, involved or not, we can explore the expanded contexts, which should not be missed. If having begun at The Summerfield Gallery, a final tour to the Cheltenham Art Gallery & Museum will greet you with Debbie Locke’s mechanically performed Dialogue drawings, which effectively calm the mind while fixating upon its continuous production of lines. And adjacent to this we can check to see if some of the subjective sites collected during our excursions, while traveling in between, from one space to the next in Cheltenham, are met by those rendered in the urban geo-graphics, or traces collected by Ortelius Drew.