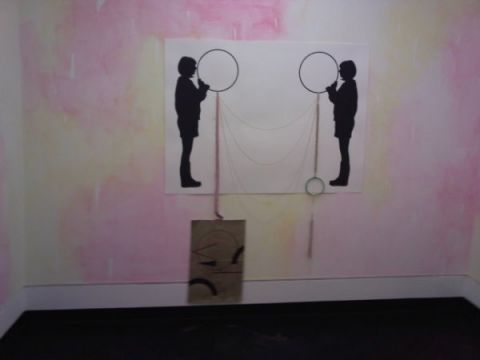 Tucked behind a small record shop in Newcastle upon Tyne, Satellite is an inconspicuously interesting place to view contemporary art. Working within the framework of project spaces and galleries which modify for purpose an expansive range of disused spaces, it is used to transport or develop aspects of artists’ work.

The space offers a unique and challenging environment. What is an intimate, accessible area for viewers must be intimidating and intractable for artists; it is a mere 3m x 4m in size. The diminutive amount of space, deploying limited viewpoints and minimal manoeuvrability, seems to heighten expectations. Open, exposed and automatically disarmed, objects become somewhat hyperbolised; determined more by their material presence than their relationship to space.

In the past artists such as Noel Clueit, Mike Pratt and Cai Nyahoe have made good use of the space for small-scale solo shows, however Satellite’s latest exhibition is a first attempt at showing more than one artist. In turn, Field marks a new and important development in the dialogue between Glasgow-based artists Ciara Phillips and Jane Topping. Less of an end point, and more an excuse to experiment, Field begets a new bond between two complementary artistic approaches.

Both Phillips and Topping are interested in the elemental ambiguity of language. Identifiable as a means to articulate or communicate the complexity of the world around us; language implies a clarification of reality. It is a means to describe, disseminate or deliver meaning, however Phillips and Topping are more interested in its limitations and liminalites; its inherent inconsistencies and potential possibilities.

Acknowledging its premise, power and potentiality, Phillips and Topping work to distort and disfigure language’s ostensible orderliness. Presenting a veritable mesh of vibrant, mixed-media works, the artists’ playfulness with materials belies an astute, enquiring intellectualism. If language is a means to ossify our relationship with the articles and entities of the world, it is also a paradoxical process; an unstable system which suppresses potential interpretation.

In Field, Phillips and Topping unhinge the ideology of language, allow ing the meaning of words to waver. Definitions are diverged, debased or distorted in screen prints which also incorporate sculpture. There is no fixed significance, or clear continuity between works, as they dare to dispute the objectivity and reliability of language itself. Letters, words and sentences are liberated from foreordained functions, endowed with a vacillating elasticity.

Topping’s explorations of the use and misuse of language are presented in the pieces Well, what would YOU do, I mean honestly what exactly would you DO, and Everything…we lived in a field of relativity, so well received is always you know, um relative and I think for me it went way better than I thought it would. Um. People seemed to appreciated it ah even though they might not have understood it that’s the bottom line. So, em yeah it went really well. It was a good feeling in Venice. I was pretty happy. Both pieces are screen-printed photographs of 1970s style menu boards littered with peculiar pictorial assemblages.

Arranging the slim white plastic letters into ambiguous lingustic constructions, Topping’s ‘menus’ are anything but informational. Appearing as if extracted from some spurious stream of consciousness or meandering inner monologue, they are obscure and sentimental snippets of text. Topping adopts ideas and phrases from a range of appropriated sources. The gothic literature of Bronte and Sheridan Le Fanu, or Foucualt’s The History of Sexuality, provide rich sources from which to explore and experiment.

Found photographs and oil-painted imagery are attached to these monochromatic motifs. In What would you do… a pair of ghoulish green hands wrap around the text. Bringing both fruition and frustration, they further defer the acquirement of meaning.

Topping personalises appropriated phrases in ways which are deliberately impenetrable yet visually poetic, whilst Phillips manifests what Jean Francois Lyotard describes as the “unreadable of writing”, in ways which further frustrate the preconceived function of words and letters.

In Ps and Qs, two silhouetted female figures adopt semaphore-like poses. Only loosely discernable as the letters they represent, these symbolic depictions present new alphabetic arrangements which suggest rather than signify meaning. Manipulating the malleability of language, Phillips reduces letters to a purely visual level. At the same time depicting the ‘language of making’, the artist incorporates craft-like techniques. Ribbons and mock gold chains are draped between the two statuesque figures, suggesting a lucid connection between the material process of making and the cerebral construction of the work.

Topping and Phillips work convenes effectively in Satellite’s excruciatingly small gallery space. In fact, the space encourages a conversation between the works and provides a fitting environment to condense the infinite possibilities of playing with language.

Despite the fact the wall-based works sit well together; collated into a satisfying conceputual conundrum, the artists also decide to collaborate on a mural which surrounds and encompasses their work. Made up of messy, watercolour brushmarks and abstract drips of paint, it appears a strange and unnecessary attempt at autonomy. Also titled Field, this colourful mural creates an elusive environment which entangles the artists’ more palatable wall-based works.

Research into the artists’ respective practices suggests that Field unites a motif from a 2009 painting by Phillips with Topping’s loose, expressionistic style of painting. In this sense, it draws further attention to the conceptual correllations between their work. Despite this, the luminous yellows and fleshy pinks create an awkward, aesthetic affray which whilst deflating the obduracy of language, also deflates an otherwise affable exhibition. The slick proficency of the artists’ screen prints clashes loudly and deliberately with the coarse, chaotic colours of Field. An abrasive experience ensues, which, whilst visually jarring, perpetuates the dysfunctional ambiguity of their quixotic enquiry into the limiitations of language. 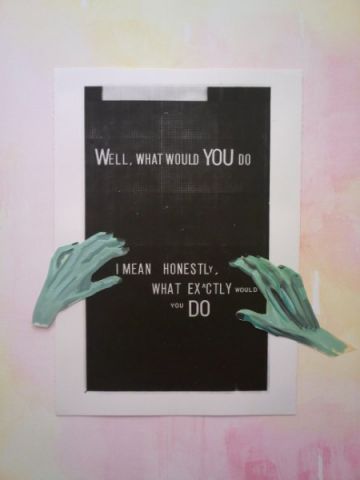