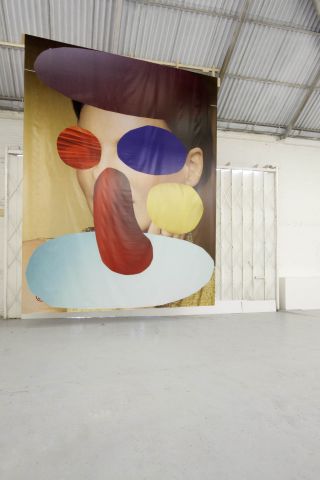 Earlier this month two exhibitions opened in Liverpool that had, alongside their unique and particular delights, much in common, but which failed for broadly similar reasons.

‘The Economy of the Gift’, in A Foundation’s huge space on Greenland St, is an exhibition that hides its anxieties and internal contradictions in the foreground of its title. Many writers and theorists – from Marcel Mauss and Georges Bataille to Lewis Hyde – have written about ‘gift economies’, particularly in relation to art. What these thinkers share is an interest in non-financial exchange – in how ostensibly ‘free’ donations inevitably incur costs, and in the obligations on the part of the receiver to repay the gift in another form. It is an ‘economy’ because energy keeps moving, as do goods and goodwill. ‘There is no such thing as a free lunch’, as Mauss never said.

‘The Economy of a Gift’ looks like a free exhibition but is in fact an art fair. It will be an annual fixture in A Foundation’s programme; this is its first edition. Its aim is to stimulate the international art market in a region in which, I imagine, it must currently be very difficult to sell art. My guess is that economic circumstance has compelled the organisation to raise funds in this way, and that it feels so uneasy about it that it has decided to divert our attention to the non-monetary forms of exchange that take place in the art world. Therefore, its structure takes the form of a series of invitations and exchanges. Four galleries from the north of England were selected to take part, and they were each asked to select a non-UK partner gallery to join them. In each partnership, one gallery would select an artist from the other’s roster to exhibit ­- and hopefully sell – work, in a somewhat pointlessly symbolic over-egging of the exchange theme.

What we end up with is, in fact, a rather elegant group show of eight artists who have little in common but whose work fits, superficially at least, into a cohesive exhibition. What threads there are emerge in response to the exhibition title. Inside the door, Rebecca Lennon’s Which part of the agreement have I broken? (2010) reproduces the titular line from three debt collection letters received by the artist, floating on A4-sized sheets of coloured Perspex. Beyond, Jacob Dahlgren’s sprawling installation Colour Reading Context (2010) sorts slabs of indeterminate material into colour-coordinated piles, interspersed with books, tiles, crackers and chocolate bars, amongst other goods. On one side are more modestly-sized stacks: Eric Bainbridge’s indefinably obscene collages joining disks of paper cut from magazines. On the other are large watercolours by the UK collective Brass Art, depicting the meetings of inky and fantastical figures silhouetted against white paper. (These were much more successful than their dull but technically-impressive digital video renderings of the mesh-like outlines of floating bodies nearby.)

Bainbridge’s simple, armchair offerings chime with the paintings of the Romanian artist Geta Bratescu, a series of circular collages and drawings titled The Rule of the Circle, The Rule of the Game (1982). Though these artists’ works seem like humble gifts to the viewer, they are, ironically, also the most sellable objects in what is, by and large, a selection of fairly uncommercial art forms. I wonder whether Elodie Pong’s entrancing videos, or Shaun O’Dell’s apparently fragile earth sculpture Where it Came From (2010), or Mark Harasimowicz’s dispersed installation of slide works and drawings, have sold yet. If I say I doubt it, that’s in no way a reflection of my opinion of the quality of the works themselves.

‘The Economy of the Gift’ ultimately fails because it is not what it says it is. The same criticism could be levelled at ‘Global Studio’, at Liverpool’s Bluecoat Arts Centre, an exhibition that claims to showcase work from within and without the city that emerged from international exchange and collaboration, but which, by and large, looks self-involved and provincial. While promising to ‘reveal the workings of a studio’ – partly through the recreation of a working artist’s studio in the gallery – it admits none of the uncertainty and experimentation of such a private space, and despite its intention to allow viewers to ‘experience the development of ideas and communication between artists’, very little interplay is visible between works save broad thematic allegiances.

Perhaps, however, it is not surprising that such ambitions were unfulfilled. How, for instance, does one demonstrate the currents of influence that flow into a finished work? To what extent can any artist be expected to ‘show their workings’ (as my maths teacher used to say) on such a prominent public stage as the Bluecoat?

The show is split into five, apparently self-curated group shows, given over to groups that have already established some degree of collaboration or dialogue. The first of these is the mock-studio space, which is given over to a regularly changing series of projects. For my visit, it was inhabited by a confusing melee of works and detritus by artists from Liverpool and Linz – presumably but not explicitly connected to the show two galleries down by the Liverpool all-female artist group POST and seven other female artists from Linz. In this display, Barbara Musil’s diaristic travel video Journal du Temps (2010), Marlene Haderer’s padded sculpture cradling a video of kittens, titled Relationship Connection (2007), and Katriona Beales’ maquettes of stylised stage sets are all highlights.

In between these galleries is a group of printmakers (no indication is given of how they came together) who show diverse work revealing little shared ground. Carl Rowe’s conceptual installation Drool (2010), featuring portraits of Ivan Pavlov (he of the dogs) printed in ink made from blended herbs and spices from G20 nations, is worlds apart from Wuon-Gean Ho’s traditional woodblock prints of mythical faces. (The latter with a small stack of leaflets for her printmaking workshop on the floor, degree-show style, beneath the work.) A label asserts that Liverpool-based Pete Clark and his Cologne colleague Georg Gartz regularly collaborate, but the resulting commonalities are not easy to detect in their work.

Better, at least when I visited, was the gallery inhabited by Liverpool artists’ group The Royal Standard, who are presenting five two-week shows over ‘Global Studio’s run. ‘Turning Scouse’ was intended to investigate what effect the artists’ localities, if anything, have on their work. While some work – Sian Green’s video Rat’s Diving Board (2010), for example – reflected something of Liverpool’s urban humour, other pieces, including excellent abstract paintings by Lucy MacDonald and a sculpture by Stephen Forge, could probably have been made anywhere, but were none the worse for it.

The standout room, however, was saved for last: four artists from Liverpool, Berlin and Paris showed work that claimed to ‘investigate space through architecture, time, history and psychology’. The nature of their collaboration was not revealed, and it is likely that the artists simply took the opportunity to put together a smart group show on Bluecoat’s premises. Henry Tietzsch-Tyler’s installation of abstract paintings and World War 2-related detritus Selbstgespräch (1990 – 2010), and Bernadette O’Toole’s uncanny circular paintings were perhaps the best things in the entire show, though did little to further ‘Global Studio’s investigation. By that point, however, I had forgotten what I was meant to be looking for, or what the exhibition had promised to achieve. As with ‘The Economy of the Gift’, sometimes a show can just be a show, and the empty rhetoric that appends it is best forgotten