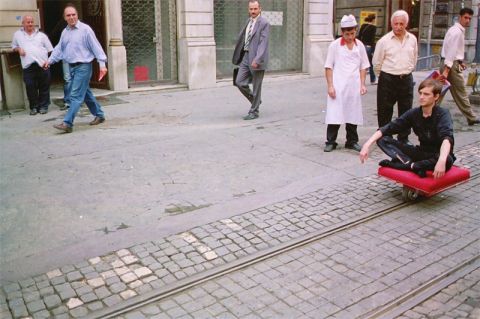 Over the past few years, a profusion of media coverage has ensured that we all know the truth about climate change. The fact that our planet is slowly decaying has been repeatedly drilled into the public consciousness and made real by a global deal to cut down emissions. Yet whilst governments and policy makers actively promote the benefits of energy efficiency, there is much to be said for the ways in which Capitalism continues to propagate decadent systems.

In a world warped by emissions and environmental instability, many artists and communities of people have chosen to fashion their own infrastructures, and in turn invent new ways of living. A recent conference addressing profligate attitudes to trade, energy and communities; exposed a selection of these creative initiatives, from tree house communities[i] to utopian ‘floating’ co-operatives.[ii]

Hosted by BALTIC Centre for Contemporary Art, Planetary Breakdown: autonomous infrastructures for a sustainable future, comprised a series of presentations and interpretative discussions which centred on strategies for sustainability and survivability. This innovative conference, facilitated by The Arts Catalyst and Newcastle University’s research initiative Intersections, combined input from artists, academics and cultural theorists.

Speakers, including Malcolm Miles a professor of Cultural Theory at the University of Plymouth and Nicola Triscott, the founder and Director of The Arts Catalyst discussed ways in which art can create (semi) autonomous infrastructures within, or adjacent to, mainstream society. Although using this brief as a trigger, conflicting ideas unfolded as to the nature, and possibility, of autonomy. The term ‘parasitical’, suggested by Newcastle University’s Matt Hearn, is perhaps a more fitting description of the work presented, and was welcomed by artists like Kate Rich, Lise Autogena and the art and design partnership HeHe.

Rich’s ongoing project, titled Feral Trade, is a public experiment which sidesteps dominant modes of transport. By asking friends, colleagues and relatives to carry supplies in hand baggage or vehicles already enlisted to travel, her pop up cafes avoid the creation of unnecessary carbon emissions. The temporal nature of these spaces, which appear in existing buildings, galleries or arts spaces, allow Rich to operate without any fixed or material assets.

By consciously feeding off others’ emissions, Feral Trade doesn’t add (and doesn’t reduce) harmful pollutants, but actively argues that through simple subversions of present-day systems, we can tackle the problems of climate change by being resourceful, inventive and in turn, pioneering.

A similar stance was presented by the Paris-based partnership HeHe who are also concerned about the environmental effects of everyday journeys. In a series of design proposals and workable prototypes, they expose and rejuvenate abandoned or partly unused rail tracks, by offering innovative travel alternatives.

Loosely referred to as the Train Project, ‘individual perpetuated vehicles’ like H-Line and Tapis Volant offer ‘a personalised automated travel experience’ which reduces a train to a one-person vehicle. Tapis Volant, (Flying Carpet in English) is a small, cushion shaped seat, with wheels and a motor, which was activated along a single line of an old tramline in Istanbul. The concept is playful and deceptively simple; a statemental reaction to surplus emissions created by Capitalist glut.

Presented as concepts or operative models for coping with climate change, these works combined utopian principles with meaningful, optimistic objectives. Playful, yet also pragmatic, they offer a speculative vision of a possible future, where creative initiatives displace the convention-bound aspects of mainstream society. For speakers and audience members alike, Planetary Breakdown succeeded in creating a visceral sense of possibility, urgency and collective excitement. Combined with a discursive, participatory atmosphere, the event was informal, enjoyable and, given the serious issues it broadly confronted, strangely uplifting.

[i] In reference to the project Outlandia, originally conceived by London Fieldworks – ‘Outlandia…is situated within the remote highland landscape of Glen Nevis in Lochaber, Scotland. An architect designed fieldstation is being built to accommodate local, national and international artist residencies, suspended in a copse of Norwegian Spruce and Larch on Forestry Commission land.’http://www.londonfieldworks.com/projects/outlandia/index.php

[ii] In reference to the Hermitage Community Moorings project as described by Lise Autogena – ‘Hermitage Community Moorings (HCM) is a co-operative which owns and operates a mooring on the Thames at Hermitage Wharf, Wapping. The mooring provides berths for up to 20 vessels: enabling a mixture of live-aboard, recreational and visitor use. HCM provides well-managed river access for local people, including educational and recreational facilities.’http://www.hcmoorings.org/