Off The Latch - a-n The Artists Information Company 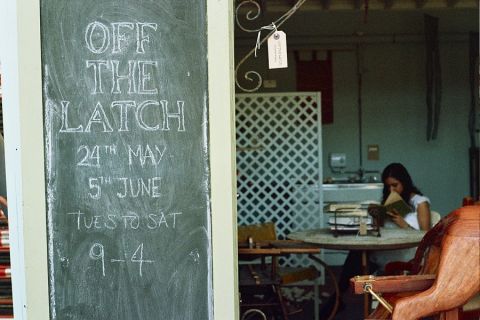 Off The Latch, a collaborative project by artists Hannah Bishop, Eleanor Lane and Rebecca Stern, occupied stall 41 of Brighton’s Open Market from late May to early June 2010. Asserting their interest in alternatives to the white-cube space, they claim in their press release to have selected this site in order to ‘explore the extraordinary nature of the everyday, illuminating the beautiful and tragic occurrences that surround us in our lives.’ The Open Market is an appropriately melancholy spot for such an activity. Established in the 1920’s (as the official city council sign rather vaguely announces), these days the tide of commerce definitely laps elsewhere; many of the stalls are vacant as thrifty shoppers seem to prefer the bargains to be found on nearby London Road with its countless charity shops and pound stores. This, the cheap side of town, is a retail world away from the chi-chi boutiques in the North Laine for which Brighton is often rated, but it’s an area of which I’m very fond: for a start it’s full of eccentric characters (including a man who wears a medallion the size of a tea plate) and there’s always something about it that reminds me of the run-down Northern towns I knew in my youth. I suspect that this conjuring of a previous era isn’t accidental: with the choice of title and many of the works being made from scavenged and secondhand materials, this project is clearly fascinated with the not-quite-now.

Were they displayed elsewhere in Brighton, several of the objects on show would have been termed ‘vintage’ and tagged with a price to match; here nothing is for sale, a fact that several visitors apparently found hard to comprehend. To an extent I can understand the confusion. There’s a particular aesthetic at work in which pale blue walls form the backdrop to a collection of objects and materials with a stylishly limited palette: hessian and cotton fabric, the patina of wooden furniture, old bronze coins, buff envelopes and luggage labels, a chalkboard… As a result, the artifacts and the way they are installed nods knowingly to fashionable emporia as ‘Labour and Wait’, or to spreads in magazines such as Country Living. Ultimately, though, there are too few objects, and they are too oddly disposed for this to signify as a retail space, whilst at the same time, within the current conventions of exhibition practice, the place is relatively overstuffed, and series of works merge together, purposefully confusing one artist’s practice with another’s. As the eye falls upon first one thing and is then elsewhere, the effect is to alter the pace of one’s viewing, and to cultivate a sense of uncertainty about the relative status of each item. Is the outdoor table upon which piles of notebooks are presented an artwork, or merely a table? Is the chair upon which I was invited to sit and browse the books, both a sculpture and a place to rest: embroidered in capitals across its seat are the words ‘PLEASE YOURSELF’ which is, I guess, an answer of sorts…

The project is rich with contradictions: it is in a market, but nothing is for sale; it is curiously domestic with its inclusion of an old high chair, some best china, and a silver spoon preserved in a drawer, and yet is not a home; items that look like clothes cannot, in fact, be worn; it is full of intensely told private experiences and personal confessions, but passers-by are invited in to talk and share. Such complexity operates even in what seem at first to be the simplest works on show, a series of quirky sculptures built from cocktail sticks, black thread and glue: these little constructions quickly ensnare the gaze, and I found myself recognising them as tiny bird-cages inspired by comic-book jungle traps – until they turned out to be models of suburban conservatories instead, their making a stripped-down version of the hobbyist’s excessive matchstick craft (no elaborate cathedrals or battleships here…) Another work, much less visible because it comprised a monitor placed on the floor and concealed with gauzy orange fabric, shows video footage of a breast-pump in action but, thanks to its veiling and the tight framing, the image is simplified and abstracted to such a degree that it takes several moments before one is able to fathom exactly what is depicted.

‘Off The Latch’ created a space in which readings of unexceptional everyday items were rendered uncertain – for a while at least – and what exactly was on offer was left intentionally ambiguous. That it managed to do this in such a way that it didn’t alienate an audience unfamiliar with contemporary art was to the artists’ credit: I know they spent a great deal of their time in conversation with a diverse variety of visitors, who in turn shared their own stories and creativity. No doubt you will consider me very frivolous, but in the weeks after my encounter with Off The Latch, I’ve increasingly found myself thinking that the stall functioned a little like Bagpuss’ fictional old shop, a place in which objects await the new life to be leant by someone’s imagination. The artists here know that thrifty recycling is in fashion right now, but it’s clear that their ambition lies beyond mere utility: they want us to explore the poetry of objects and its resulting potency within our emotional lives.