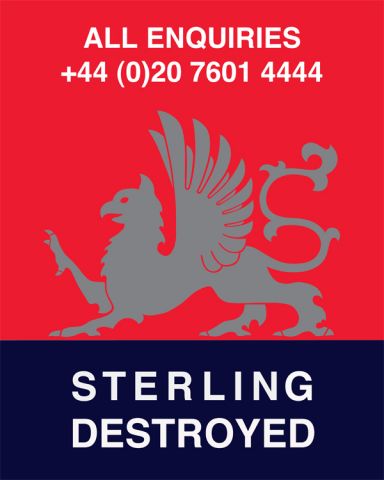 Sold Out is a group exhibition of 37 artists who have come together in support of the Palestinian Children’s Relief Fund. As one might expect, the selection of works bristles with political comment and, on occasion, unrestrained anger. Hung in the hybrid space of a personal home / gallery that is Elastic Residence, the exhibition takes on the quality of a cabinet of curiosities; a personal collection of artefacts that tremble with the tension of recalling trauma. The event that sparked the exhibition is the boarding of the MV Mavi Marmara which attempted to run the blockade on Gaza on March 31st, resulting in 9 people being killed by Israeli defence forces.

As an event organised at short notice, and which will end in a charity auction, the exhibition does not hold up to being viewed as thematically contiguous but rather as a sampler of artists who feel strongly about the situation in the Middle East. Works are left to be discovered amongst the everyday objects of the curator’s home, and, as they are often placed close together with a very short viewing distance, the show encouraged an intimate and informal relationship with the art being displayed, akin to what one experiences in a private collection such as Kettle’s Yard in Cambridge.

Opened by Martin Creed and His Band, performing a set that they had previously played at Tate Modern, the exhibition starts on the façade of the house with what seems to be a signboard of a well-known estate agent but on closer inspection turns out to be a work by Bethnal Green bad girl Daisy Delaney that reads ‘Stirling Destroyed’. The sign signals both the despair at Western capitalism to live up to its own image of safeguarding freedoms and the schadenfreude of seeing a system that was once proclaimed the end of History, itself teetering on the edge of collapse. If you call the phone number on the board, it is not answered by an estate agent, but by the control room of the, presumably bemused, Bank of England. Inside, we are first presented with a red and white declarative work by David Blandy which states simply ‘Keep it real son’ and moving through the exhibition it is clear that whatever style, medium or message the works have, the curator, Deej Fabyc, has assembled a group of artists whose intention seems to be just that.

Or perhaps it is that we are placed in such close proximity to the pieces that we cannot help but absorb the artists’ personal investment in their own work. Jon Hillson’s self-consciously postmodern slow-motion video reworking of a Caravaggio and the deliberately juvenile pastiche by Sarah Doyle (head and shoulders portrait finished with nail varnish and glitter with comments lifted from MySpace) seen in a regular white–wall space would perhaps come across as detached and sardonic, Sold Out, however, coaxes out of them an elegiac quality. Their wit is superseded by the objectives of the show and they become caught up in a story of lost childhood. With pieces such as Cyril Lepetit’s take on Picasso’s dove with an olive branch – two doves with olive branches in the act of mating – which flies as a flag over the Elastic Residence building, or Daisy Delaney’s elegant technical drawing of a karabiner and military helicopter with flowers, the child revolts. These and other works like Laura Oldfield Ford’s scratchy POW-like drawings of expensive housing developments that exhort us to ‘Burn Out the Yuppies’ speak crudely, and of the necessity of speaking crudely when justifications cover up ugly truths. In the bathroom of the house hangs a photo of an anus with cut-out newsprint letters that spell ‘fucking shithole’ spiralling into the sphincter. The catalogue entry for the work tells us that it was made by ‘A FAMOUS ARTIST’.

The curator and founding director of Elastic Residence, Deej Fabyc has one of her own pieces in the show. Matamem is a duratrans photographic installation that shows a doll standing in dark undergrowth with the lights of Canberra in the background. The visual language is ‘B’ movie horror, but Fabyc explains that the doll is fashioned after her mother when she was young, and that it is placed in the area where her mother’s ashes are scattered. This information is not in the catalogue though, so the image alone is ambiguous; redolent with a sense of cinematic narrative but, presented without additional information, hangs in space for us to create a story of our own choosing. In this ambiguity Fabyc’s work shares something with Beat Streuli’s head shot from his Brussels series; a Muslim woman stands with a slight grimace with her face in the sunlight. The anonymity of the woman clashes with drama of the photo which makes her the protagonist in an unknown drama. It is both a highly democratic and romantic piece; valorising a life that could so easily be silenced by narratives sanctioned in more powerful and prevalent media.

Another subaltern study is Marie Le Mounier’s Angel, a series which isolates short series of film stills of women pointing a gun straight at the viewer. Here we are caught up in the difficult moral territory of the oppressed responding with violence. The sequence on show at first resembles a Warhol multiple print of the same image, but from frame to frame we see the subject contemplating the act of firing with a look of ambivalence and intense concentration. In Paul Sakoilsky’s blood-stained Israeli flag with the text ‘the dark times – SORRY FOR BEING SUCH WANKERS’ we are left to wonder whether it is the Holocaust being recalled, or more recent Israeli atrocities.

It may have been that creating a show that mixes a range of artists at various points in their careers, showing a wide variety of material was a matter of necessity, however, having such a loosely-controlled exhibition, in a non-standard gallery space extends the charitable nature of the event to a sense of inclusivity in respect of the works and the audience. This is not a jumble sale of varying talent that is the RA Summer exhibition model, but the placing in the same exhibition of delicately crafted works such as Simeon Nelson’s stunning red Ornamenemanro with Jessica Voorsanger’s vicious Queen Mother photomontage is the act of a generous curator stepping back and letting us celebrate difference.

John L Tran is a British artist and writer of Vietnamese descent, currently based in Tsukuba, Japan.Â