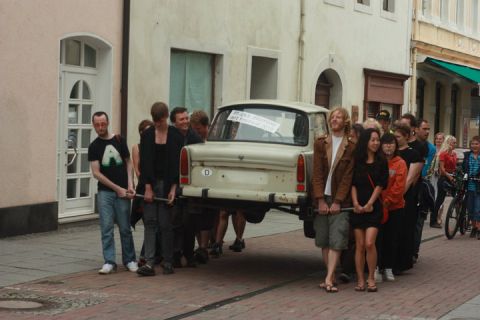 The first Atomino experimental art and music festival in Crimmitschau, Germany, was inaugurated in spectacular fashion: an unregistered Trabant 601 automobile was carried in ritual procession through the streets of the town, by twenty artists and participants of the festival itself, much to the bemusement of local people who stared incredulously from their balconies at this bizarre pageant. The ‘Trabbi’—object of both derision and affection by East Germans—was a staple of the former German Democratic Republic, but also a symbol of the industrial core of Zwickau, the region of Saxony in which Crimmitschau is situated. The procession was both heroic and poignant, and by the time the bearers entered the gates of the textile museum (the site of the festival itself) it seemed as though anything was possible, setting a kind of benchmark for the events that were to follow.

Unfolding over three days, Atomino was the brainchild of Diego Galvez and Tina Pagel, assisted by ‘workcamp’ leader Stefanie Hübner, and technical manager David Blanco, and supported by a small team of volunteers. The festival’s manifesto was a bracing call to arms for artists to resist the competitive and commodity-driven ethos of the art market. In its place Atomino proposed a free event, for which all artists were to be at least equally compensated: the organizers paid for travel to and from the festival, and provided accommodation (spartan, and mostly within the walls of the museum itself) and food (vegan, cooked in an outdoor ‘kitchen’ area). The spirit of this mission statement echoed that of a rebellious post-war German youth culture, particularly the experimental music of the late ‘60s—a fusion of free jazz, psychedelia and electronic avant-garde—fuelled by what was then seen as the betrayal of innocence by an older generation, coupled with a profound ambivalence towards the products of American popular and technological culture. This led at the time to the founding of the Zodiac Arts Lab in West Berlin, and the establishment of a ‘kosmische’ musical aesthetic (known generically in the UK as Krautrock) through the likes of Kluster, Neu, Faust, Tangerine Dream, Can and early Kraftwerk. The fact that a few of these bands went on to discover a degree of commercial success is incidental: the fiercely independent ethos of German music of this period was to find echoes in the UK and other parts of Europe, in a DIY aesthetic that still persists today as riposte to a pop music culture commercialized beyond parody.

In this sense Atomino’s declaration can be seen as a blast of fresh air in the face of the numerous and increasingly corporatized art festivals taking place throughout Europe each year. Certainly it managed to create a commune-like atmosphere, with artists from different parts of Germany, as well as the UK, Ireland, Argentina, Spain, Finland and Ukraine sharing living quarters and meals during the several days both in preparation for, and during the festival itself.

With an emphasis on performance the various cavernous spaces of the textile museum provided a dramatic backdrop, and some of the better acts made thoughtful use of its industrial structures. Unfolding in one of the factory’s heavy-duty lifts, Adam de la Cour’s opening performance could have been provocative for all the wrong reasons: complete with white gloves and ‘blackface’ makeup, this in fact turned out to be an affectionate pastiche of the ‘world’s greatest entertainer’, Al Jolson. Backed by two pianists, de la Cour’s incremental truncation of song-fragments foregrounded the time-specific mannerisms and brash melodrama of Jolson’s style.

Likewise, the expansive colonnaded space of the weaving gallery, together with the spectral presence of serried ranks of Jacquard looms, formed an elegantly complementary setting for Matthew Knowles’s The Story of a Magnificent Banquet. Read at breakneck speed, this was a drastically reduced and impassive version of de Sade’s ‘The 120 Days of Sodom’, contrastingly set against a slow, intermittent sequence of chords played by pianist Vanesa Santanach.

In amongst the steam-press hardware, Alasdair Smith’s alter ego, Professor Ahabraham Sexian, outlined his membership of the Maarhaysu Institute, “a mysterious, underground scientific institution that exists to explore implausible fields of research”. Smith’s performance and the extremely lo-res video that accompanied it were permeated by a deadpan, crack-brained humour, whilst the instructional nature of his lab-coated talk, complete with questions from the ‘factory floor’ audience, attained a plausible mythology, albeit one from a skewed, alternative universe.

The musical content of the festival ranged from sound installation through to more conventional band performances. In the former category, Luca Nasciuti’s beautiful palindromic soundscape, performed surrounded by large packing boxes (which, to my mind at least, seemed to enhance the lower sound registers), recalled the electronic drone music of artists such as Jacob Kirkegaard and Ben Frost. However, Nasciuti’s source—the recorded silences of empty or deconsecrated churches—lent the piece a structural integrity all of its own. This is sound art of a distinctive character, tinged with melancholy, and deserving of a wider audience.

Anda, aka Marten Seedorf & Lars Kaempf, a ‘live music experimental electrofolk’ duo, were hugely and chaotically enjoyable, deploying disparate ‘instruments’ including transistor radios, telephones and guitars, to anarchic effect. Their displacement of a variety of loudspeakers throughout the space chimed perfectly with the somewhat chaotic character of audience seating.

The video/sound works of Paul O’Donoghue, aka Ocusonic, explored the relationship between moving image and sound, and are described by the artist as the “real-time generation of synchronous audio and visual material”. This structuralist injunction gave way to a surprisingly lyrical experience: Chasing Waves utilized voltage-controlled video synthesis, whereby sounds created the images on screen, controlled in real time. Why do you have a beard? proved to be an inventively playful piece of face-morphing, accompanied by a fittingly synthetic, rubbery-funk soundtrack. The title of this work provided an ominous context—being one of a series of questions posed by airport staff as part of an anti-terror security drive.

The most disappointing aspect of Atomino was the 2-D work: the strident surroundings of the textile factory simply overwhelmed the more conventional pictures-on-walls approach, and even works painted directly onto the walls themselves failed to make a purposeful impact. More successful at utilizing the building itself was Michele Pagel’s productive deployment of textile machinery: by filming the chickens used in her video in situ, the resulting work ironized and self-referenced a stereotyped work ethic, and was shown on a monitor perched atop an unidentifiable piece of factory equipment; a second monitor—displaying a parodic earth-mother figure—was tilted at ninety degrees on top of the first, forming a precarious makeshift column.

Overall, and in spite of some teething problems, Atomino was a varied and enjoyable festival; Atomino 2011 is already being proposed, although the organizers might want to consider whether it is more appropriately a biennial rather than an annual event. There were clearly some issues that will need to be addressed: mediation of timed performances and general directions for visitors were fairly perfunctory, particularly given the labyrinthine nature of the textile museum itself. Rather than lack of planning however, I suspect that this was due more to the relatively small team who had taken on the task of managing such a big event. No doubt the organizers would also like to have seen a more sizeable attendance, particularly on the final day, when things tended to fizzle out somewhat (although Ukraine’s Scrag Aisedory theatre group provided a dramatic, Grand Guignol finale). However, it is not too difficult to imagine Atomino establishing itself as a cultural event in the arts calendar, and attracting a substantial audience from further afield. It would certainly be good to see the festival repeated in Crimmitschau—a refreshingly unlikely setting, but with useful proximity to cities such as Leipzig and Dresden. It is to be hoped that both museum staff and the local town officials can envision the potential attraction and economic benefit that might accrue as a result. Atomino proposes a new and challenging model for art festivals of the future: it is one that should be warmly embraced.

Jonathan Gilhooly is an artist and lecturer based in Brighton, UK www.jonathangilhooly.com Â