2012BC - a-n The Artists Information Company 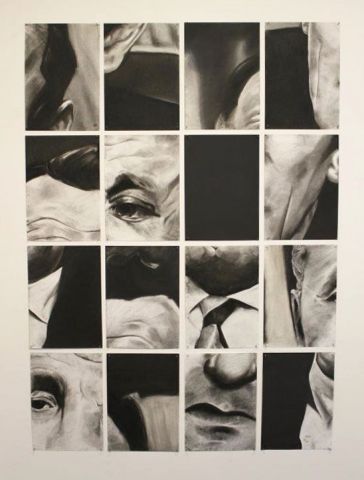 2012BC – A meditation on being present

Late for the private view, I meditate en route, on the title, preoccupied that I am about to fail to be present at an art event which proposes 2012, the acknowledged present, AD time, as BC; before Christ. Is art is about to distort time, propose that our now exists pre Gods representative on earth? To miss witnessing and reviewing the blasphemy, such rupture, the hokum herald of a second coming would be apocalyptic in my small life. I hurry.

Revelation: BC in fact refers to Birmingham City loyalty and an artist collective born of Margaret Street School of Art. After the event, seeking writing inspiration, I Google ‘2012BC’ and am offered Winter Games and London Improvisation references.

In an attempt to make the exhibition 2012BC real and present to the absent and present, I make the following offerings as useful coda going forward:

a) Structured time as pre and post, old and new, with start, middle and end

b) Games and play, human activites taking place in the moment

It is my second coming to the work of Polly Saunders. Again, exquisite use of charcoal on paper, simply nailed to the wall with honesty and a gap between each element. Nine units which each offer a segment of a male face, a mouth, an eye, a plane of inbetween. Polly draws, literally from art history; the face is that of Merleau-Ponty, a philosopher of phenomenology, a questioner of how we experience the world, for whom the portrait sitter was not the primary goal.

A proponent of ‘making present’, of experience starting now, as Anno Domini, our structure of time begins with the presence of Christ. Merleau-Ponty and Polly propose that my experience of the work is the work. I am kept present within a loop and state of puzzlement because the artist plays with my intuitive and learned belief that a human face is the most recogniseable thing, readable with minimal coda.

This work is a face but denies a simple obvious narrative journey or solution to remake it. Each viewer selects a different starting point or feature, a key to begin to read the whole. The whole remains subjective and open ended. An old art historical face begins with me in the now and stays perpetually with me in the present, stuck moving in incomplete pleasurable puzzlement.

Matt Webb‘s work sits in territory between nostalgia for the drawn, printed graphic world and people centric storyline of the comic book, and evolutions of the digital Internet matrix of now. The artist produces a series of hand drawn part storylines from his personal bank of authorial narrative. These are screenprinted en masse onto large MDF block panels and cut down.

Working in graphic black on wood, square single story tiles or units migrate across the gallery wall in open narrative. Webb delegates arranging the pieces, the narratorial control, to others. This work is the gospel according to Polly Saunders, but the blocks on the wall are pixel units forming a narrative matrix that can be following every which way, is multi-layered and ambiguous, offering infinite beginnings, middles, endings and reading spaces.

Conceiving and hand drawing narrative, sacrificing it to the cut, giving its life to others speaks of an open handed creator. We discuss colour as entity and the fear it generates as a potential player, as germ or worm in this unsullied black and white world, which knows no disease or shame. How can it not punctuate and dictate the reading? Be too visually loud? This is a lived fear which Webb experiences but is delegating to his arranger to build, his reader to narrative. He is working on characterizing colour as an alien, an actualized figure of fear within the work. A serpent let loose in the garden.

If Saunders and Webb are aware of control and choose to open their grip then Hannah Humphreys appears to operate in a moving meditation of the hand somewhere between the two. Apparently channeling through a portal from her creative subconscious, brush as conduit for auto writing in paint.

If colour in isolation is too strident a signifier for Webb, Humphreys lets it all flow in, saturation in colour, texture, gold, iridescence, with some staccato mark making but no true narrative message, boundaries or contruct. These are however large portrait canvasses that hang on the wall. The inner world tapped by human activity of the artist ends at the edges of the canvas. Here black would be punctuation. The edges of the two-dimensional surface mean this chapter of the portal has closed to be viewed as a visionary 2D slice of inner experience made manifest on a surface in the outer world.

Sophie Bancroft also dwells in colour and is treading the boundary of control, allowing the incidental to drive a dialogue with the paint and surface. Here the form is responding to and morphing with the experimental processes according to a will of its own. She is present as facilitator with the materiality of her work. Confidence not to fight, but to take flight with momentary instinct led the artist to notice and embrace a flow of excess watery acrylic flowing behind a worked canvas onto plastic laid out to protect studio floorboards. Flood or act of God, she responds to and manipulates the flow of paint and observes its cockling affect on a paper surface. In response the paper adapts to her and is further curled and rolled to enable her exodus to this London show. This is lived work, doing in the present, figuring out the authorial narrative reflectively afterwards, or not.

Daniel Salisbury authors text, inkjet printed on everyday copy paper. Despite a suggestion from fellow artists that his presence in language with a reviewer might be limited to a shrug or mumble, he is articulate and immediately open about his own fear of colour, tackled out of a black and white comfort zone for this show, by necessity or accident.

Having been using marker pen direct to the wall, the aspiration here was a printed book. Life intervened, this became adapted on the spot, in the gallery hang to wall placed, repeated single pages of paper in varying pastel colour: cream, yellow, blue, pink, green.

These occur in landscape or portrait series, 2 x 5 and 1 x 5 A4 sheets. If there is narrative in repeats, differentiated only by colour, then here is equal dispersal of paper colours and bias towards horizontal, linear narrative. The left to right read is of course open. Sometimes the work is a series of hand gestures for interpretation.

The text choice is specific and considered, A David Shrigley-esque corrected hand write, Ariel font selected for accessible readership, and anti-design status. It is consciously appropriated as a children’s book text and non-discriminatory or elitist asking for all human response, removing intimidation, giving permission to make what you will.

One message is confessional lack of artistic aspiration inviting a participatory response through humor to release tension. A helium balloon is wall mounted in its deflated state, labeled ‘helium is in decline’ and a text offers an opportune quote which seems to sum up the note struck here; the ‘wet fart ‘ of dub music.

The noise of this work seems to be a wet fart symphony, the whirr of photocopiers in a soul sucking office. This speaks of the world of The Office, BBC2 sitcom and “come friendly bombs and fall on Slough”, of Brent and Betjeman. It is reacting with a shrug, a laugh a bathetic take on the human condition. It is comedy, reflecting back the wet fart for laughs in response to the heckles of life, but like all good stand up the material is well prepared and the audience orchestrated through the narrative telling, the comedian in the moment to react and not corpse.

A plastic lit up globe sits on the floor, plugged in, near a white balloon with the word ‘blank’ in marker pen. The non-magical globe coheres the colours in the paper works, but is apparently an accidental gallery find. The artist reflects on Google advice to travel the world if uninspired, while standing next to his work, which asks whether the viewer is uninspired. The options, Yes, Yes and undecided tick boxes.

Salisbury has spent time with and decries the state of the dictionary description of maps as falling short by listing things that just don’t say it. He is preoccupied with the inadequacy of a western diet of news headlines. A future project might be to open it up to others to share the world commentary that lands in their daily lap, their digest of headlines and build the world from a giant list, a single omnipotent view drawn from a shared pool of observation. A contemporary reenactment of God building the world in seven days, powered by office workers, the globally uninspired in wet fart revolt.

Time to close. The private view has passed. The show is over. Unplug the globe. I reflect on insights into considered artistic authorship and narratorial ‘gods’ relinquishing control, to open up the narrative to the work itself, to people – those living it in a new present.

While I was present at Tokarska a man in long white robes offered to better in size the diamond of a newly engaged woman and to buy a painting by another woman. Another man purchased his second piece of Salisbury work, declaring his wish to take the whole collection. Why? Because the artist is a genius, he said. He was very drunk and his bike had been nicked but he staggered off into the night unphased, and apparently having seen the light.