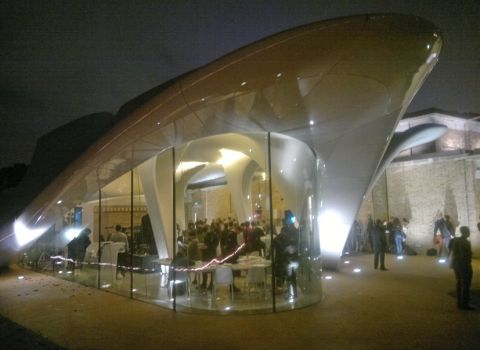 The Serpentine’s 89 plus Marathon aims to create dialogue focused on artists, writers, scientists and poets who were born in or after 1989. The event ran over the course of two days, inside the new Serpentine Zaha Hadid extension. A series of roughly 15-30 minute presentations, performances, and interviews brought together around fifty young and talented individuals with a few older well-respected big names.

Hans Ulrich Obrist kicked off at a sterling pace, introducing the concept of the platform research project. He credited those responsible from bringing it together including Simon Castets, co-curator of the event, and Ben Vickers the digital curator and producer of the 89plus clubhouse, the online platform for the project.

Carsten Holler (the man who put a 55.5m high slide in the Tate Modern turbine hall) spoke about his favourite young Russian artist Valia Fetisov, who plays similar games with his audiences. For example he created a works which locks the viewer inside an empty room with a sliding glass door, till they figure out they have to stand still for 30 seconds for the door to open. Carsten’s piece of advice to young artists was; ‘be naive!’ explaining that as you grow older and learn more, it makes you behave differently, and has the potential to limit how experimental you are.

Next up was Kevin McGarry, writer and curator from New York who spoke about his concept of ‘Generationality’ referring to a break down and impossibility of defining changing generations.

Hito Steryerl then gave a well thought out presentation comparing what happen in 1989 with what is happening in 2013,her words were inspired by digital imagery for example a photo taken of a hand drawn map of the Kenyan Westgate Mall during the recent attack.

Max Hawkins enthralled all with his project www.callinthenight.com a mass participatory phone project which involves over 30,000 people who all agreed to take part in late night conversations with complete strangers. The idea came about with the artists wishing to explore ways of recording his dreams. He created a programme which automatically called him at some point after 2am in the night time, and then asked a series of prompting questions.

He then decided to invite others to take part, with the added element of connecting participants anonymously, so that they could discuss their experiences whilst being recorded. Max realised that the project outgrew the original aim, allowing people to share their thoughts and feelings in a meaningful way. For example we heard a recording of a conversation between a young man who had recently left the military and a woman, in which he declared ‘ I feel I have thrown my life away’, she replied ‘it’s ok’, to which he said ‘ I have never told that to anyone’. The work takes advantage of technologies ability to traverse geography, enabling people to escape loneliness and vulnerability.

The evening’s showstopper was certainly young poet laureate Warsan Shire who read from her anthology ‘Teaching my mother how to give birth’. For those who are cynical about poetry, may I suggest you check her out (http://www.bbc.co.uk/news/world-africa-22358337). She read from her poem ‘The House’ which begins with the line ‘ Mother says there are many locked rooms inside all women..’, it then goes on to describe a series of stories of past loves, all of whom she metaphorically keeps inside separate rooms within her body. It is a stunningly beautiful work.

The evening ended with a series of films including one called ’Wonderland’, by Halil Altindere, a humorous rap video based in Istanbul with a subversive political message about marginalised communities, then Ryan Trecartin’s ‘Junior War’ which compiled multiple clips of teenagers hanging out whilst posturing to the camera and a performance from Koreless.

Day two began with a discussion between Hans and Zaha Hadid, the architect of the flying saucer space in which the event took place, who no doubt had plenty to talk about since the launch of the new gallery. Zaha was refreshingly honest and frank, her tone was husky and sombre, with the occasional reveal of a slightly more witty side to her personality, which included the comment; ‘All older architects are mostly men, after a certain age they become worse’. They discussed the introduction of digital technology to her practise and what difference it has made. Her advice to young architects was; ‘Architecture is incredibly demanding, you have to work very hard. Be open to new ideas.’

This was followed by the presentation of the Serpentine Grant by Italian art collector Sandretto Re Rebaudengo who enthusiastically explained all about her Foundation in Turin and how it aims to support young artist, and further the public’s appreciation of contemporary art. Winners Niko the Ikon and his collaborator Tierney Finster then got up on stage to explain their work.

Artist and lecturer Brad Troemel spoke(or positively outburst) at a seemingly accelerating speed during his presentation about ‘Asletes’ a new term he used to describe a combination between aesthetic and athletes (http://main.bradtroemel.com/Writing/Athletic%20Aesthetics.pdf ). He theorised about artists who produce art rapidly and distribute it online on social media and commercial platforms to an unsuspecting accidental audience. The work thereby competes for attention with all manner of information and advertising, producing many confused responses and regularly is misinterpreted as not art at all. He gave an example of a work by Aaron Graham, who attempted to convince his audience of the ability to cook a single strip of bacon using hair straighteners which was quite amusing. Brad’s talk was punctuated with a one minute time-out, which was as much benefit to the listeners as it was to him, delivering and processing a concentrated volume of words worthy of the Guinness book of records.

One of the day’s highlights was hearing Olafur Eliasson (the man who built a sun in the turbine hall) talking about his idea for the ‘School of Unlearning’. He said he wanted to encourage artists to avoid taking predictable and boring career trajectories, so he created a school which did not contain the normal institutional hierarchies which he called ‘the school of unlearning’. The idea being that one should enter the school ‘old’ and at the end of the process you arrive at being ‘young’ having unlearnt useless information which life fills you with. He also said he wanted to encourage artists to touch the world in a responsible way, with the possibility that what they end up making might not even be art. Taking the risk to do something meaningful as being more important than making art.

One of Elliasson’s protégés Vinzenz Reinecke gave a heart-warming presentation accompanied by harp player, Benjamin Pollock, and random inspirational images. Amongst the many charming anecdotes Vinzenz shared he attempted to hold a live conversation with his grandparents in Germany, but unfortunately the signal on his phone failed, which was a shame.

This eccentric performance was then followed by the radical hacker and writer Eleanor Saitta who went into grand detail about the relationship between institutions and networks and the impact that has on society at large. She pointed out that if you find the restriction of being called an artist too defining; then stop calling yourself an artist, which I quite liked the idea of.

Highlight number two was the arrival of Gilbert and George, who arrived on stage as well dressed and savvy as ever. Hans interviewed the pair asking questions about how they began and what motivated them. They said many interesting and wise things, including how they realised that ‘bad luck always leads to good luck’ citing an experience of being rejected from an important show, which then inspired them to gate-crash the private view and do a performance of their living sculptures, which thus lead to a top art world collector, Conrad Fischer, inviting them to do a show.

They read from their list of rules and Ten Commandments which included for example;

Always be polite and smartly turned out.Make the world believe in you, and pay heavily for this.

Their advice to younger artists was ‘It is very important to quit the day job and even more important to quit the night time job too.’ George then added as advice to art students ‘When you get up in the morning, you need to sit at the end of your bed, close your eyes, and decide what you want to say to the world today’. Gilbert then followed this with; ‘Fuck the teachers’.

As indicated by the title of the event, at some point during a Marathon, the participant ‘hits the wall’, which is what at this particular point I believe I experienced. I arrived at saturation point and the need for coffee overtook my ability to take in anymore ideas, and thus I stopped taking notes. However, many amazing speakers did continue to present their thoughts which included; K-HOLE (http://khole.net/) presenting their ideas on how youth culture influences consumption, coining the terms ‘MASSINDIE’ and ‘NORMCORE’ (see website). Kathryn Mills, doctoral student researching brain development during adolescence giving a fascinating lecture on the effects of internet use on the developing brain. This was followed by series of brilliant poetry reading by Luna Miguel, Gabby Bess, Crispin best and Ben Brooks. Many speakers followed, but I am particularly sad to have missed the final performance by Le1f, an openly gay rapper well known for his unorthodox production styles, but you can check him out here (http://www.youtube.com/watch?v=Nrnq4SZ0luc).

To summarise in short 89plus was a positively energetic inspirational event, which opened my understanding of the potential of digital technology and the ideas of young artists of the future. For a first experience of the new Serpentine space it does not get any better than this.