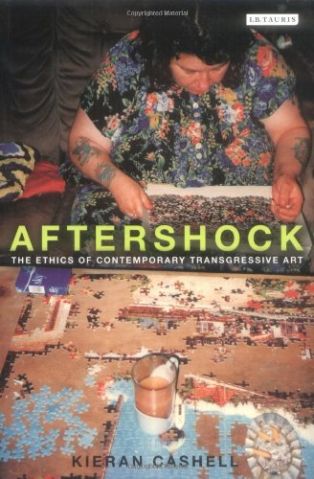 Aftershock: The Ethics of Contemporary Transgressive Art By Kieran Cashall 2009

Aftershock. After the shock. How do we approach artworks nowadays after that “shock” period has faded?

I took this book on as a challenge hoping to find that there was something more to the work that I had so determinedly and stubbornly written off as not something that would interest me.

Kieran Cashell, the author of Aftershock: The Ethics of Contemporary Transgressive Art, has chosen a particularly challenging issue of ‘transgressive art’ (art forms that aim to transgress; i.e. to outrage or violate basic morals and sensibilities) to approach and the ethical exploration of visceral, emotional and ‘ethical’ responses without dismissing or defending.

We have all seen the work of Damien Hirst, Tracy Emin and The Chapman Brothers, to name but a few, whether in a gallery or newspaper or as ‘shocking’ material that the news has chosen to thrive on. They have become inescapable and unlike many artworks seeps into and transcends that artistic boundary line between the art world and the everyday. Yet, so many times I find myself, and I’m sure many others too just find themselves wondering: “Why?! What has made them do this? And is it morally correct that these receive such immense publicity where as more thoughtful and less in your face work gets swept aside?”

Before reading this book I found myself disinterested in the hype- it seemed to me it was created for the press and only to bring fame to it’s creators’, massaging their egos and not to explore a worthwhile concept. Admittedly I would reach to that extreme and occasionally tell people that although I am an artist I have nothing to do with ‘that’ sort of art, almost apologising for its’ existence. Just as Mark Wallinger writes “cynical media manipulation and self promotion” by the artists.

Through progressing through this book, I have been re-educated. Not so much in thought or knowledge of the work, but more in the concept of what it stands for and it’s interaction with its audience. We are all a ‘cultural tourist’ to the work, we take a first glance, connect a paragraph of blurb to it, affix our personal culture and values to it and either get attached to it, wanting to know more, or dismiss it as if we know all we need to as we have made up our mind. There is a strange sensation that comes across a cultural tourist when assessing artwork. We are morally uncomfortable in the role and quite often, if the ethical values explored are too much or ‘unacceptable’ the aesthetics will be disregarded, and vice versa. Oscar Wilde’s proposed that ‘the critic should be able to recognise that the sphere of art and the sphere of ethics are absolutely distinct and separate.’ Cashell adds that to simply apply ethical evaluation to art is to somehow ‘erode the intrinsic significance of art and risk compromising the exclusivity of the aesthetic experience.’ So should this ‘transgressive’ art: work that goes beyond the limits, that violates this moral code, have the right to have its’ ethics and aesthetics approached separately? Anthony Julius has said that “to describe an artwork as “transgressive” is to offer it a compliment” and perhaps it is. The transgressive abandons control is unconfined by rules and restraints and challenges the received and accepted ideas. When you think of art throughout the ages, is that not what most artist has strived for? Challenging the banal, the accepted, creating something that is either produced in a new way, or reaches ideas, concepts and emotional bounds with an innovative approach. Why should something talked about on the news, in the papers, in the pub not be explored through art? Perhaps it is attacked so much because we are compelled to look at transgressive artwork. More often than not we are not allowed to escape from it, forced into being a ‘covert pervert’ or a peculiar person intrigued by the disgusting? I feel that this is why we often feel we must take a stand against it in order to not be linked or associated with such uncertain work. Like Emin’s ‘Everyone I have ever slept with’ 1963-1995, do we make it more shocking than it actually is? Do we expect to be tried and tested? Therefore forcing our preconceived ideas upon the artwork? Only through reading this book did I find that even I had believed hearsay and how the media portrayed it. This piece of work is not about sex. It is about sleep, intimacy and moments. Not just between sexual partners but family and friends and whomever else you might fall asleep next to. Suddenly you realise that it is something everyday and tangible, known by every living person out there, something experienced the world over, yet because of the title and the artist’s connotations, this concept has evaporated from many people’s opinions and responses to it.

With the question of is this work acceptable, Cashell writes that if even whilst we are trying to create a distinction between taboo or moral value, “we have already been affected by the work. We’ve already responded morally to it, already answered: right or wrong”.

For instance, was Myra, 1995 by Marcus Harvey, so shocking because we wanted the events it forced us to remember to be forgotten? Possibly the taboo of making such a tragedy into artwork was so outrageous because traditionally, especially in England, we prefer to sweep painful events or troubling issues under the carpet so that we do not have to face it, let alone take a stand on a belief. It seems that adopting a disinterested viewpoint is often preferable as it means that it does not have to be ‘dealt with’. Yet this work provokes a moral reaction and therefore obliges the viewer to adapt a position in relation to the attitude it represents. Whether the work causes national outrage, is defaced or even just reported in the metro, surely it had succeeded as it has forced the viewer, whether obligingly or not, to opt for some sort of opinion and not sanctioned to dismiss.

Conitivist Matthew Kieran wrote that “the value of an artwork depends on the quality of the experience the work affords and the insight and understanding it’s conceptions.” Perhaps it is not most importantly about the ethics or aesthetics but about emotional reactions: getting a response however positive, negative, violent or passive, it initiates the viewer or even participant to engage with the art work. Engaging with the work personally, experiencing it, means to confront its difficulty, react to it, connect with it and finally to make a response.

Artist and freelance writer working in the West Midlands. www.alexandriaclark.com