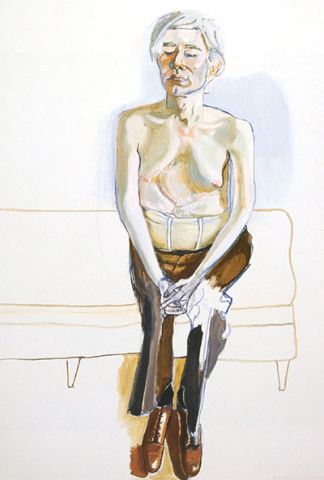 This exhibition brings together some of the most important portraits from influential 20th Century American artist Alice Neel (1900-1984) celebrating the effect her work has had on our way of painting and certainly our means of representation. A worthwhile summer exhibition hosted by the Whitechapel Gallery, the exhibit is promising. The Whitechapel has a reputation that the National Portrait Gallery does not always possess, deciphering Whitechapel to be an excellent location.

Neel seemed bent on working around a psychological acumen for her portraits and out of respect for her children whom passed away or were removed by divorce actions, Neel instantly found a personal connection to her life. At a time when Abstract art was in prominence and the male white painter went unchallenged, Neel altered the traditions of portraiture and like most, worked on either full-body paintings or bust portraits and sometimes individuals or more than one at a time. When first starting out, Neel already had inspiration from various resources (predominately American) but if we observe her use of colour and brush stroke, she probably had a bit of Picasso in mind, specifically his earlier non-Cubist work (e.g. The Old Guitarist from the ‘Blue Period’). Whilst Cuba developed Neel’s first insights into depicting political figures New York City, specifically Harlem, she began depicting communities of immigrants; children, adult and elderly. The thematic structure of the exhibit is divided into sections of her life as she would have produced had Neel written an autobiography: the Allegory, the Essential Portrait, the Psychological Portrait, Portraits from Memory, Parents and Children, Nudes, the Detached Gaze and Old Age. Each portrait to each section more intimate than the next, Neel’s solace from her depression and attempted suicide came full circle in her art which was becoming increasingly popular among Communist Party leaders, though Neel herself was not an official member.

With portraits of the marginalised people Neel met every day she moved on to famous subjects that revealed their true nature and feelings to us, the audience. A prime example is the haunting and vulnerable portrait of Andy Warhol. Be sure to look out for Neel’s own self-portrait as well as other famous figures Frank O’Hara, Meyer Shapiro and Linda Nochlin as they each work well with a psychological theme Neel carried into most of her work.

Alice Neel’s portraits and few cityscapes are as important to us now more than ever for their representation of 20th Century American life, particularly within the confides of New York City, a melting pot of cultural diversity. The Portraits from Memory section would prove useful to drawing students and illustrators as an exploration into the relationship between modern technology and human memory.

Like most portrait artists, Neel found the vulnerability in the people she depicted nude but unlike other artists, Neel also gave sympathy to the Communist members she depicted that would have probably had her imprisoned years before. With the Feminism movement increasing as quickly as the Communist Party, Neel’s inspiration and influence grew, as she developed her social realist paintings to suit the needs of mothers, pregnant women and political parties.