All Front Looking Back - a-n The Artists Information Company 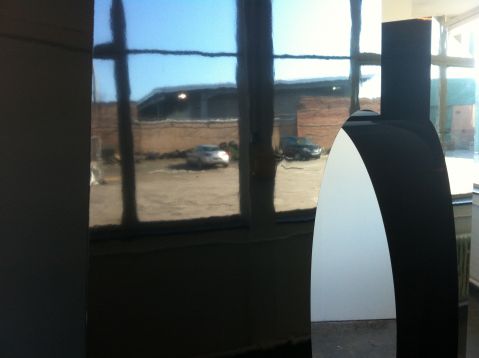 “Gentlemen,” concluded Napoleon, “I will give you the same toast as before, but in a different form. Fill your glasses to the brim. Gentlemen, here is my toast: To the prosperity of The Manor Farm! ” Napoleon Pig in George Orwell’s Animal Farm.

In the last three months I have shuffled through a bunch of shows featuring Modernism’s recent populist revival and they were all just fine. Modernism is after all an aesthetic that anyone can get or has perhaps explored as an artist at some point in their Career. Duchampe made Beautiful paintings and Joseph Beuys was obsessed with the figurative sculptor Wilhelm Lehmbruck before they opened the ubiquitous box to the new world. Modernism is the gateway to the inner self and can let the viewer know how you feel.

What strikes me about this new installment is how it saturates the art landscape, or is universally championed. There are recurrent themes running through student shows to more established artists offerings. If you were to swap a few pieces around from show to show, who would really notice and would it matter?

Another recurrence to accompany what I call ‘retro neo expressionism’ is its political back drop. Mass Anti Tory sentiment, riots in the Cities and Mass unemployment. As Broken Britain echoes the 80’s so does its art. Is there something about the pretty colors and Geometric shapes that draw people to them when they need to escape?

There is more of an emphasis on sculpture this time around allowing for exhibitions to look like stringless mobiles for large social cots or the Post Modernist Fantasy room in Brewster’s Millions. With the bedroom tax coming into play we may have much more room for sculpture in homes as people knock though walls, just like that extra wall space for painting when avoiding the window tax of yestercentury.

So that was my thinking of late when it comes to Modernism and then I saw James Mclardy’s ‘White Teeth In The Planetarium’. The setting was the Royal Standard of Liverpool and to be honest you have to be a fan of industrial landscape artist Charles Sheeler to feel comfortable upon arrival, which luckily I am.

Mclardy immediately hits you with that Modernist morphine swiftly followed by an array of respectful spot the reference games. Anish Kapoor comes to mind with the Monolithic ‘Object No More’ with Tatlin and Beuys getting a look in with ‘Admiring To Be Admired’ and Serra raising his solid head in ‘Corrosive Pleasure’ but I could go on all day trainspotting.

What is important about these works is that they are none of the above and they are not what they seem. Each of these works is a deliberate falsity with slivers of Laminate on wood tricking us into thinking we are seeing bold dense solid art. The industry has been removed. Like a Greggs in a Neo Classical library these works show how the world has to keep up with its own demands. The past is the past and the facades are still beautiful but they are no longer supporting those old ideals.

The juxtaposition of works like ‘Corrosive Pleasure’ with ‘Turn Around When Possible’ evokes memories of coffins on display next to a headstone in a funeral home. Is Mclardy saying Modernism is dead and we are the mourners that can’t move on.

So that’s all pretty morbid and serious but alongside these connotations and references there are still some delicious ‘things’ which is the trick in this show. I can imagine the wax in ‘Admiring To Be Admired’ pushing into my gums as I sink my teeth in whilst rubbing my fingers up and down the washboard surface like an entranced child in a dangerous Crèche. This show has a duplicitous personality and knows it.

On another note there is a collaborative insert thanks to Ruth Barker’s text based on a description of the show by the artist on the telephone. Her words continue the sense of contentment the sculptures can offer on that level. In keeping with the invoking of the past, this process reminds me of Walter Benjamin’s statement in Art and the Age Of Mechanical Reproduction.’

‘Even the most perfect reproduction of a work of art is lacking in one element: its presence in time and space, its unique existence at the place where it happens to be.’

Barker was not there amongst the works to feel what I was to feel or in this case what James takes as a guest from his own work. She was only privy to a re telling of the story.