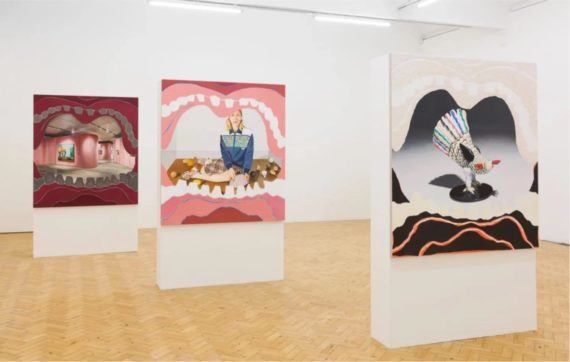 One might be disappointed if expecting the title ‘Artery’ of Allison Katz’s exhibition, to refer to the fleshy conduit which carries rich blood from the heart- and its associated symbolism (as the exhibition catalogue analogously declares).  However, after experiencing Katz’s exhibition of paintings at The Camden Art Centre, I felt a more apt reading of the title to be Art-ery: as in trick-ery, Tom fool-ery, or artfulness.  For this is a show very much of one-liners, of jokes, puns, playing with materials and random associations.

The exhibition spans across two galleries with a series of self-promoting, mid-century styled graphic posters in the central space. Gallery One paintings consists of mainly wall-hung works, the exception being two, central ’floating’ partitions.  Imagery in this space being somewhat loosely connected by motifs of monkeys, chickens and eggs.  Gallery Two paintings present more cohesively. The viewer is confronted here by five medium-sized canvases hung on freestanding walls arranged in a triangular ‘domino-like’ formation.  Each painting representing various imagery is ‘framed’ by the interiors of a mouth- as if the viewer is inside the body, a voice peering out.  Behind each of the five ‘mouth paintings’ was a small painting of cabbages.

The exhibition starts impressively in Gallery One with a strikingly convincing painting of a shiny, steely, open elevator.  It is an arresting example of trompe l’oeil, insisting that the viewer changes viewpoints to experience the illusion.  Conceptually, it ushered in a sense that you are stepping into some believable fantasy or dreamscape.  This inviting premonition does not last however and as the exhibition unfolds, the disparate nature of Katz’s juxtaposed imagery, rather than convincing of some parallel world, just became a somewhat arbitrary image ‘mash-up’.

And images are the dominant source of stimulation in this exhibition. The paintings in Gallery One appear as collages from Katz’s image bank. Some combinations evoke reflection, others less so. In the case of the latter, the works seem somewhat aimless, presented perhaps with the intention to bemuse if not confuse. I tried to enjoy the space between these two reactions but struggled to find substance beyond the blatantly obvious. This was especially evident in works such as ‘Someone Else’s Dream’ which spotlights a naked man in a field of livestock, ‘CCTV’ a painting hung high on the wall portraying an angel-like form and ‘Nottingham Canal, 11th March 2020’ illustrating just that. More interesting paintings were ‘2020 (Ephemeral)’ and ‘2020 (Femoral)’. Moving beyond the literary pun, the presentation of black and white egg shapes between the two paintings set against a backdrop of writhing limbs brought with it multiple associations and interpretations projecting a pleasing sense of conceptual depth.

Much of the exhibition moved away from the potential power of imagery however and relied on clever wordplay. The association between images and the literary were obvious.  In Katz’s long painting ‘The Other Side’, spanning across two interior gallery walls, a chicken emerges in increasing opaqueness from left to right evoking the joke ‘Why did the Chicken Cross the Road…?’. Ok, I get it- Boom-boom! Additional to these ‘punchlines’, were elements of what seemed like unashamedly juvenile ego, literally painted across many works.  Indeed, the exhibition guide explains that the ‘shifting combinations of her own name are threaded throughout her work as a slogan (‘All Is On), an alias (‘AKA’) and a ‘MASK’ (Miss Allison Sarah Katz)’- letters used calligraphically to define facial features. I found these references to her name throughout many of the paintings (‘Alley Cat’ being another) to be self-indulgent, narcissistic and at best unnecessary. This navel-gazing element only distanced me further from trying to access any deeper significance in the work and distracted me with the- ‘Look everyone, I’m here!’, insular attempts at being clever.

More impressive elements of this exhibition lay with Katz’s attempt to address painting’s significance today.  Her use of the gallery space was different and included alcoves to investigate, partitions to navigate and unorthodox hanging to contemplate. Upon arrival, the space looked appropriately contemporary.  This, no doubt, has been part of Katz’s rising appeal- being shortlisted for the Max Mara art prize for women in 2020 and her inclusion in last year’s ‘Mixing It Up: Painting Today’ at the Hayward gallery.  Katz’s use of sand and rice mixed in with the paint was also very effective, securely positioning these paintings within the “post-medium condition” (Rosalind E Krauss). However, I am not sure how much of an impact these unconventional materials contributed conceptually to the work though the execution and effect was impressive and quite a spectacle to visually absorb.

Gallery Two presented the more conceptually linked presentation of five ‘mouth paintings’ with small cabbages on the backs.  The concept of linking words and sounds with imagery (alluded to in Gallery One) was made more concrete in these paintings.  The contrast between what felt like a scream or a loud noise from the open-mouthed paintings and the quiet, small cabbages on the reverse had a particular charm.  Each cabbage painting was delicately painted and included the profile of what appeared to be a man encroaching from the right. Why the profile?  Why cabbages? The exhibition guide declared that ‘[the cabbages] ‘head’ and ‘heart’ and ‘arteries’ [are] analogous to the features of the shadowy absent sitter’. My feeling was that they were just as arbitrary as much of the other work though satisfyingly represented, literally, as a flip-side to the ‘shoutiness’ of the painting behind it.

Katz’s execution of paint is free and direct, reminding me in places of the gestural marks and ‘washed-out’ ink-like aesthetic of Luc Tuymans’s work.  However, unlike Tuymens, Katz is not afraid of colour, though I would not describe her as a great colourist. I enjoyed the passages of confident painting and the seeming lack of struggle with the handling of the oil and acrylic paint.  Each piece appeared to be conceived in its entirety before execution. And it was this very fact which placed such a high expectation for the work to have clear conceptual gravity.  This expectation was often unfulfilled.

Katz’s exhibition ‘Artery’ is worth experiencing at the Camden Arts Centre.  From a purely aesthetic perspective, there is much to enjoy.  I did leave however feeling somewhat confused and disconnected. Expectations of what a painting could be today is probably, historically, at an all-time high (an unenviable challenge for all contemporary painters) and Katz is clearly attempting to engage with this. Her preoccupation however with trying to be clever by ‘doing tricks’, though initially refreshing, quickly became somewhat tedious. Try as I did, I could not discover what the exhibition guide described as ‘[the] more tangential networks of communication, meaning and connection, as well as our inner drives and psyches’. On the contrary, I experienced a sense of detachment. Maybe this was Katz’s true intention- to reflect the cool and clinical stereotype of a contemporary painting exhibition. If so, ‘Artery’ succeeds in spades.