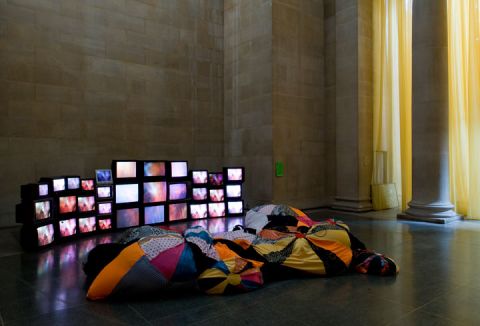 Although I am familiar with the writings of Nicolas Bourriaud, Altermodern's "supercurator", for a long time I misunderstood the meaning of the title. I took Altermodern as a kind of German neologism, as a hybrid of old (alt) and modern. The idea of an exhibition that involved looking back at art practices and perhaps even historical events of the past, and recasting them in the light of present day concerns seemed to me to be an exciting theme for a Triennial at Britain's national art-historical museum.

However I was wrong, Altermodern means rather an alternative to both to the Modern and Postmodern, though even Bourriaud seems disinclined to proclaim it as an "ism". Altermodernism – no, it doesn't have a ring to it. But forget the "ism" – the show is fascinating.

Upon investigation I find that my original misapprehension – the idea of examining history and historicity itself – is actually very much a part of the show,

However one of the common problems with art appropriating methods that have been firmly developed by other disciplines – in this case history (or philosophy for that matter) – is that it is difficult for the resulting art work to avoid having the gravitas of, say a first-year undergraduate history essay.

Nicolas Bourriaud knows this, and so he has kept text within the exhibition to a minimum, and no audio guide, thus encouraging the audience to just go ahead and encounter the work, make our own meaning from what the work actually says to us. Bourriaud's fine catalogue offers plenty of text to take away and consider, with excellent and thought provoking essays by Okwui Enwedor and TJ Demos.

Bourriaud's Altermodern sets up a framework that follows on from his discourses of "relational art", with its focus on multiple and intersubjective encounters between work and audience. Altermodern offers a selection of works notable by the way in which they meander or wander through time, space and media. Famously, in past comments, the curator has referenced practices such as DJ-ing cutting , sequencing, stitching together diverse elements into something that is neither a "whole" not simply a jumble of parts.

the curator and the supercurator

I have been cynical about the idea of the “supercurator” (and equally of the expensive curating degree courses that have sprung up), seeing them as a glitzy substitute for deep and long term engagement with art and culture. But no doubt about it, Nicolas Bourriaud is a damned good curator. He knows how to put on show that really uses space well, a show that is full of surprises and has brought to Britain a show which does not rely on YBA-esque one liners or “ironic” takes on this or that. Everything is though provoking, from each individual work, to the relationship of the works within the framework of the Tate.

Take Spartacus Chetwynd's “Hermito's Children”, an exuberant if deliberately amateurish and improvisatory video installation. When I arrived at the Tate I had a quick refresher tour of the other galleries including William Etty's "Youth at the Prow and Pleasure at the Helm," a picture we had when I was a child, and which left a lasting impressions on me for the sensuousness of the figures and exciting narrative (a boatload of orgiasts about to be drowned in a sea storm). Chetwynd's work, placed not far from Etty's painting, has a similar effect: the (deliberately) cheesy narrative, the sensuous figures, that are sexual without being smutty, colour and form, all infused with (in Chetwynd's case) a contemporary female gay-positive ebullience.

This is not the “ideas based art” that has haunted British galleries for the past dozen years or more. This is visceral, visible and tangible art, that you can spend time with. These are works of art that act as carriers of ideas, not as ideas themselves.

Altermodern is vigorous and assertive, visual and striking. This is neither conceptual or minimalist art, and just for its sheer passionate excess I enjoyed it more than I have any other major group show in years.

The rhetoric of cinema fascinates many of these artists, since cinema is THE principal cultural form of the past century. No contemporary artist can avoid a consideration of cinema. It is fascinating how non-reciprocal the relationship is: few if any film-makers turn to contemporary art for ideas or visual nourishment. (I digress).

Some of the most fun things in the show are also the weakest, if the criteria are profundity and pedigree, if those criteria count! Nathaniel Mellors's "Giantbum" is a silly channelling of Alfred Jarry, as performed by an am-dram society and filmed by community access TV. And I was riveted to it.

Much weaker is the higher budget "Feature" by Shezad Dawood, a "zombie cowboy" film (paying a nod to Rodriguez's "From Dusk Till Dawn") which I was quite shocked to find was deeply boring ( a view shared by others in the screening room). Dawood attempts a sort of Jodorowsky-like examination of myth and legend, but he forgets that Jodorowsky is deadly serious about his spiritual perspective.

Tacita Dean's storyboard "The Russian Ending" is typical of her work: fine, beautiful, thoughtful, melancholic and worthy of contemplation. Although it was a bit drowned out by the more raucous work it was placed next to (Avery's "Aleph Head"), it is probably the principal piece that I would desire to see again, and again.

Altermodernity, to Bourriaud is about negotiations between different agents, different cultures and geographical locations. However, I am afraid that I cannot be so optimistic. In a Britain where the Home Office has enacted draconian legislation limiting and in some cases curtailing artistic exchange beyond the EU (see Manick Govinda in A-N Feb 2009), the promise of Altermodern as an exchange seems hollow. The exchange is one way, the way of the privileged, where thanks to funding, Easyjet and sweet passport regimes, some can be Altermodern and the rest – especially the critical, the non-institutional and the radical – are just stuck.1 This is less a critique of the show itself than a nagging discomfort at the curator's claims of freeform cultural hybridity inherent in the idea of "Altermodern".

Also, I wonder just how much given to "travelling" the curator is, since by far most of the artists featured in the show are actually based in London. While I applaud Borriaud's bringing in particular Navin Rawanchaikul, Rachel Harrison, Subodh Gupta, Pascale Mathine Tayout and Joachim Koester to London, the UK selections don't see Bourriaud getting beyond Zone 2. Not only are they based in London, almost of all of them are alumni of the same 4 London art schools (we know which those are.) Does Bourriaud really believe that "the best of current British art," or the only good artists in Britain, are in London and have attended one of these schools? Or is that the official Tate line, to which he must adhere? Either way, we must be told. And if either is the case, we need to think about what to do with all of the other art schools, and artists, elsewhere in the country.

It is true that London is an amazing art melting pot, with some fascinating artists, including many who have NOT studied at the Big 4. (Some, like Oleg Yanushevsky, have come here under strange and unusual circumstances.2 Consider also the superb "self-taught" and reknowned Israeli-South African photographer Nadav Kander. Or the stunning and disturbing immersive video projections of Anglo-Italian duo SDNA.) The apparent narrowness of the selection vis-a-vis the UK seems to me to belie the claims of "Altermodernity" though given the record of the previous Tate Triennials, it seems par for the course.

But I don't want to dwell on any negative aspects of the show, which I found enjoyable and provoking in equal measure. For me the highlight was probably Marcus Coates's video "The Plover's Wing." Coates enacts a kind of shamanic chant of bird and animal noises, then delivers an apparently heartfelt (I hope) and humane discourse, ostensibly about the defensive tactics of the nesting plover but really about the culture of victimhood – in individuals and nations – and how those who perceive themselves to be vulnerable react to danger. It is the most incisive artistic intervention into the Middle East (or any other) conflict I have ever seen, and it really moved me. Coates's work showed me the inherent possibilities in "Altermodernity," to harness the gifts of globalisation to make a real exchange of ideas.

NB. On my visit, Lindsay Seers's piece was not working.

1E.g. The recent refusal of an entry visa to Dmitry Vilensky of Chto Delat, when he was scheduled to give an artist's talk in the UK.

2An artist refugee from religious extremism in Russia. 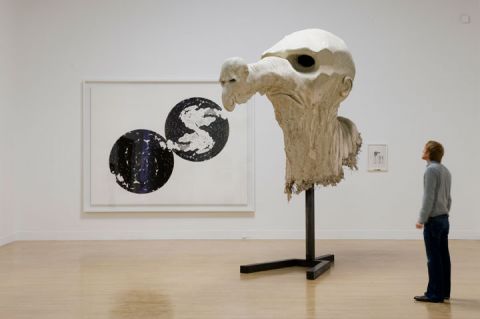