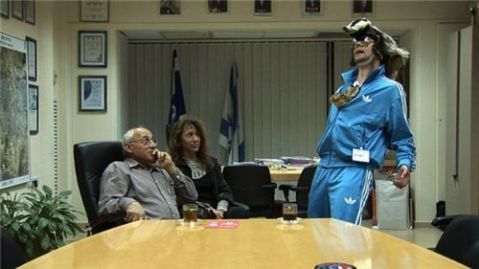 “ Altermodern is an in – progress redefinition of modernity in the era of globalisation, stressing the experience of wandering in time, space and mediums. The term ‘Altermodern’ has its roots in the idea of ‘otherness’ (Latin alter = ‘other’, with the English connotation of ‘different’) and suggests a multitude of possibilities, of alternatives to a single route.” Bourriaud, N. February 2009.

Tiffin pots and pans, steel cookware of many descriptions are presented as if they are exploding out of the floor. The structure ‘clouds’ the entrance to the exhibition making it invisible when advanced to from the Millbank entrance, which is nestled between a very tall set of net curtains that appear somewhat surreal in their size and colour. Overtly opulent they give the cold stone an intimacy and if approached correctly lend themselves as a backdrop to the Subodh Guptas’ work ‘Line of Control’, as well as segregating the main exhibition hall and darkening it, setting the space apart from the rest of the building.
Walking through what could be a poke at the king’s Mimetic acumen, the ‘paying part’ of the exhibition begins with a bank of monitors some displaying entire images others form part of a collective that make up the whole, the video is a succession of scenes that can almost be expressed as soft porn involving naked women. Here, in this darkened arena you can sprawl yourself across an outsized nebulous cushion made of ‘North African’ style print whilst listening to the accompanying audio on one of the many headsets, the bank of collective screens appealing for a collective audience, willing to take the time to sit like voyeurs, watch and listen. Looking at the guide for information of the artist and work I thought perhaps I had come through the exit rather than the entrance as I tried to read the guide in conjunction with the work, it took me a while to work it out. Slackly pinned A4 sheets curling dismissively next to the work gave it a title along with its makers name ‘Hermitos Children’ artist Spartacus Chetwynd. After several minutes of uncertainty I had worked it out, the guide is not set out in order of work placement but the artists are listed in alphabetical order, and the work was where you found it.

In a room off a room in the gallery I came across Marcus Coates’ ‘The Plovers Wing’ 2008 the artist transports his thoughts into the animal realm with ‘shamanic’ fashion in order to guide an Israeli mayor through troubled times, where the youth in his town are experiencing violence. The conversation begins quite plainly and calmly with the exception of a badger’s pelt lying on the artist’s head and a large hare or rabbit poking its face out of his electric blue Addidas shell suit jacket. The artist tells the mayor what will commence once he has expressed his concerns. Coates stops talking and starts to breathe heavily, after a while it is clear that a transformation has happened, Coates raises himself from the chair and begins chanting in a myriad of animal dialects consisting mainly of bird call. At times I found the performance hysterical and let my laughter out in a full screening room, which caught on in an instant. Although it may sound ridiculous the artist came across with the utmost sincerity seeming genuine in his efforts to help resolve the Mayors concerns. In the space of ten minutes all questions had been asked and duly answered his ‘Humanness’ (Bourriaud, N. February 2009) returns and the explanation begins. He describes what animals he saw in this case a bird, the call it was making, and his interpretation of it, “Ok I’m used to English wildlife and I am not exactly sure what this one is called” (Coates 2008), he describes the bird as having a ‘thing’ at the back of its head and being quite a small rounded bird feeding on the ground near water, it has a broken wing that is ‘Sort of trailing on the floor’ (Coates 2008). [At this point I notice a vibration, the video is set in its own darkened room with seating for around 12 people, there is an L shape divide, and on the other side of the wall there is an installation by Gréaud, L. ‘Tremors Where Forever (Frequency of an Image, White Edit)’2008, which at set intervals vibrates the wall and floor which resonates throughout the screening room.] Coates interprets what he saw in the animals behaviour and relays it to the Mayors translator, so in effect the information is being translated/ trans-coded on two occasions once with Coates in his interpretation of specific behaviour and condition of the animals and then again through the mayors translator, so from animal to English to Hebrew. How much gets lost in translation?
Bourriauds’ idea that “Altermodern art often functions as a hypertext, translating and transcoding information from one format to another’ Bourriaud, N. February 2009. Barriers and boundaries are ignored in an attempt to resolve issues perhaps through the creative voice of the artist.
Altermodernism as I understand it addresses the issues under enquiry holistically by using means similar to that of the World Wide Web. One line of inquiry leads to another and another. Like a network of possibilities, this is not a linear progression but one that spreads itself in all directions and opens itself to many possibilities both probable and improbable of which the original concepts are hard to pin down or unpick. These works can lend themselves to some confusion when you are trying to understand the artists’ concept and language, although some of the work can be quite literal in its implementation. Our linear Western history now gives way in the same way as our geographical boundaries. Due to technology and political events of the past 20-30 years it is no longer viable to assume that one historical event led to another then another but that a multitude of events that happen as a whole shape us in a way that we are today.
I can liken this to the brain of a dyslexic “Visual thinking is a holistic system of merging and intermingling knowledge in space. It involves synthesis, intuition of complex systems, inductive
reasoning (from the whole to the constituents, fragments.)” http://news.softpedia.com/news/Dyslexia-The-Strange-Genius-Disease-28005.shtml.
The concept may be rooted but the research is transient and infinite as you make your way from one hyperlink to the next sometimes not pausing long enough and sometime stopping for too long, the choices are vast and boundless.

Coates, M. ‘The Plovers Wing’ 2008, Courtesy the artist and the Workplace Gallery. 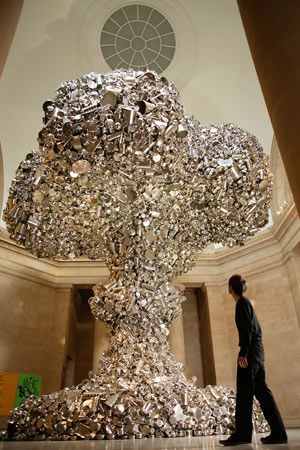