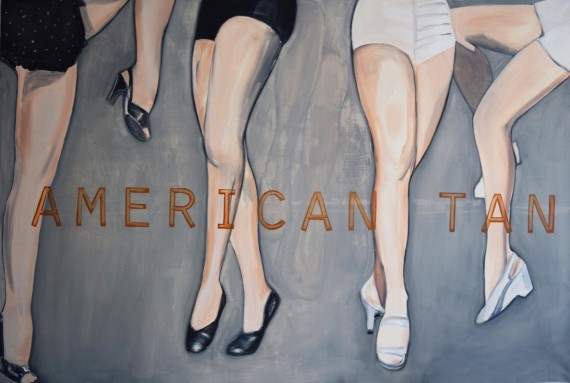 Just about the time Cathy Lomax was busy installing her show American Tan  in rain-drenched Streatham, over in Manhattan, between the Hudson and the High Line, the new Renzo Piano designed Whitney Museum, was dismantling its inaugural exhibition America is Hard to See (1 May – 27 September 2015). Named after a Robert Frost poem, this homespun blockbuster included nearly 650 collection works by more that 400 artists in every imaginable medium filling nearly 50,00 square feet of gallery space with hidden gems and unforgotten histories of 20th century American art.

Hardly comparable with the Whitney’s huge slice of New York chutzpah, Lomax nonetheless had filled her specially Baker-Miller pink painted room (i) at DOLPH with a dazzling choc-a-bloc cornucopia of paintings, prints, sketchbooks, found and made ephemera, sculptural installations and a specially curated Dream America film selection in an eclectic selective display of many of the things that intrigue or disturb her about the illusive notion of the American Dream.

Cinema is the all-encompassing hinterland in which Lomax’s work is situated. It is not only her theoretical impetus, the inspiration behind her Film Diary paintings, the location of a never-ending supply of imagery, but also the main signifier through which she explores a multiplicity of ideas whether visual, historical, political or personal.

Included in this modus operendi the artist considers the time spent in the act of film watching, both the visual pleasure and the formal analysis, as integral to the process. A committed cinephile, Lomax has created a methodology where, out of the studio downtime and research invariably feeds back to productive studio work-time. As novelist Walter Percy writes in The Moviegoer:

‘The fact is I am quite happy in a movie, even a bad movie. Other people, so I have read, treasure memorable moments in their lives: the time one climbed the Parthenon at sunrise, the summer night one met a lonely girl in Central Park…but it is not much to remember. What I remember is the time John Wayne killed three men with a carbine as he was falling to the dusty street in Stagecoach, and the time the kitten found Orson Welles in the doorway in The Third Man.’(ii)

With Percy, it is merely a matter of remembering, whereas Lomax finds an ulterior motive for her recollections. The memory forms the basis for a painting, which is then cut from the film’s narrative and shown alongside yet another memory, which leads to a new re-presentation. Or as one visitor to the exhibition on seeing the Film Diary section remarked ‘it reminds me of a cartoon strip or maybe a storyboard where I make up the story’

Lomax is notoriously non-committal about revealing the original film titles from which the scenes are taken, preferring instead to name the paintings with ambiguous phrases, which gives them an additional story-telling element. Thus taking a random selection from the film diary from American Tan we have She was going out, followed by He asked everyone for advice to They had gone up to the parlour, to the dramatic finale of She had been deceiving him (a prone woman with arms and legs akimbo looking fallen from a great height, and possibly dead).

A good title is everything

In a talk given to accompany the show, Lomax, explaining the title, described how she had been thinking about the commodification of women, particularly with the way that female stars in old Hollywood and into the 20th century become products to be marketed. ‘American Tan’ is also the name of a now unobtainable shade of tights sold in the UK post World War 2 when everything American seemed more glamorous.

This seeming-ness of glamour, its enchantments and disappointments were recurring themes. One section within the central table top installation included a series of hand made badges entitled Forgotten Film Stars which featured the names of people such as Gene Tierney and Robert Walker who were huge stars it their day but who are now forgotten.

During his time in Hollywood when he was engaged by Twentieth Century Fox to work on a script for The Great Gatsby F. Scott Fitzgerald wrote:

‘Except for the stage struck girls people come here for negative reasons – all gold rushes are essentially negative – and the young girls soon join the vicious circle…Everywhere there is, after a moment, either corruption or indifference.’ (iii)

In her section of paintings wittily entitled Stars in Stripes which included both Rita Hayworth, Kim Kardashian and Elvis, Lomax was commenting on how these stars become known for their style, for what they wear  and how they look rather than for their personalities. This was further emphasized by the kinetically graphic arrangement of the images, which only on closer inspection revealed their identities.

‘We didn’t need dialogue we had faces’ (iv)

There is a contemporary trope nowadays whereby women’s faces are often smeared or obliterated as if by this painterly disfigurement the artist is making some serious feminist statement. Lomax counter intuitively abandons this route. In  Collect the Set a series of Film Noir heroines, made into faux card collectibles, faces are hyper revealed rather than hidden. In a kind of forensic examining; the curve of a set of lips, a particular shade of lipstick, the exact flick on a hairstyle or a well-placed ribbon, can be viewed as translations from the mythic-ness of film. They contain within them the deconstruction of a language of signs, which began in the silent era. At a time when stars were the earth bound gods and goddess of the modern world, film make-up was employed to emphasise their divinity as French philosopher Edgar Morin, quoted in The Cinema as Art says:

‘Star make-up does not oppose a sacred vision to the profane life of the everyday; it raises daily beauty to the level of a superior radiant unalterable beauty. The natural beauty of the actress and the artificial beauty of the make-up combine in unique synthesis’(v)

Lomax  stated that ‘The surface appearance of things is fascinating to me and Hollywood has been the master image maker’ and quoting Laura Mulvey added,:

In this way Lomax has gone on in her recent work to use shiny surfaces such as iridescent paint and glass. Consciously embracing a decorative visual language, which is often trivialised as being associated with women. Her installation Gams (meaning legs) features a series of small paintings of femme fatale legs on a kaleidoscopic dressing table arrangement of mirrors. The uncanny pink walls reflected in the mirrors give the installation the feel of a cosmetic counter or bedroom dressing table space of female becoming.

Lomax  asserted that ‘I am interested in play-acting, disguise, masquerading, and how we can enter other worlds through, film, books, music and dressing up. In the blurring or fact and fiction, creating one’s own version of things by combining pop culture with our own experience’

In American Tan, it is not hard to find America, far from trying to hide it Lomax seems fan bent on revealing it. But given that like the dream to which it aspires it can only ever be a construct, the artist is not averse to re-creating her vision with a suitable dose of camp. In the kitsch wall of mirrors, which include those thrift store, no longer collectible photographically printed mirrors of Elvis, Clint Eastwood, Blondie and Marilyn Monroe, fans can simultaneously stare at their own image reflected through the object of their desire. As Richard Dyer, writes in ‘That’s Entertainment’ in an essay originally published in ‘Playguy’ in 1976:

‘How then to define the camp way of looking at things? Basically, it is a way of prising the form of something away from its content, of revelling in the style while dismissing the content as trivial… What I value about camp is that it is precisely a weapon against the mystique surrounding art, royalty and masculinity – it cocks an irresistible snoop, it demystifies by playing up the artifice by means of which such things as these retain their hold on the majority of the population.’

DOLPH
Natasha Khan and Paul Cole started their Streatham gallery DOLPH as a revelatory Pandora’s open-boxing exercise of asking the invited artists to share all the personal idiosyncratic notes to self that go on to form the work on show. In an interesting new model from the usual exhibition showing of up-putting and remaining mute, DOLPH allows the artists, in a corresponding talk day to share with the viewer their Own Private Idaho of influences. Adding a generous added layer of understanding to the whole look, see and now hear what the artist intended.