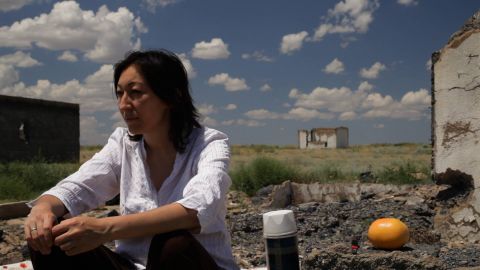 Ruth Maclennan’s Anarcadia at the John Hansard Gallery in Southampton is a fine example of a choreographed, chiselled piece which looks at the aesthetics of landscape by isolating it from its context, and then re-suggesting it in all its elements as a stronger and emotionally compelling portrait.

The exhibition consists of a 30 minute video installation, commissioned by the John Hansard and Film & Video Umbrella, plus a number of wall based works and video installations including documentary film spanning from the 1930s to the 2000’s. According to the artist herself, Anarcadia was not intended as a comment on Kazahkstan’s political context. This confirms the feeling I had when viewing the video in the darkened, meditative space of the gallery: the piece is a study of a desert landscape as a symbol, a paradigm, an archetype.

In his interview with London-based Maclennan , John Hansard Gallery director Stephen Foster is reminded of US western films, whilst remembering the artists’ previous work, involving her first encounter with Kazakhstan years before. Maclennan’s memories of that work highlight her choice of wanting to work with the country’s landscape since the first time she experienced it, and her will to detach it from its social connotations at the same time, as if to frame it in a different way. So Anarcadia’s desert becomes a neutral backdrop of human observation, a monologue which becomes dialogue between the video’s characters and their surroundings. The characters of a prospector and an archaeologist talk about their work, fictional but believable to the point that I found myself studying the attention to detail that had gone in their construction. Their dialogue’s veracity was counterpointed by the two characters’ signs of hard work on their clothes, their hands, their demeanour. Pearls of sweat visible on their forehead, they talk about their days in the desert. The silence of the landscape is illusory as it reveals the sound of the breeze, of heels digging in the ground, of equipment being calibrated and used. The moving portraits in extreme close-up reveal a taste for the contemplation of human nature and its feats. A taste also present in the accompanying archive imagery and films of a Soviet-era railway being built in the 1930’s, including posters, footage and photographs.

In my view this represented the real key with which to read Anarcadia: its singular elements – which the artist presents separately –  represent the detail rather than the whole, and when seen all together they build a powerful, socially poignant portrait of Kazakhstan old and new. According to the show’s description of the piece, “For both protagonists, the lie of the land merely prefigures a deeper preoccupation with what lies beneath – an excavation of the forgotten legacies and uncertain narratives of history, as well as an increasingly frenetic material probing (gathering pace throughout this part of Central Asia) for pockets of mineral wealth. These parallel journeys, evoking the magnetic attraction of the frontier, as an untamed tabula rasa and as the site of a half-remembered Eden, are implicitly inflected by the imported iconography of the American West, as if these remote, uncharted vistas offered new scope for these enduring myths to be enacted.”

The building of railways has always struck me as the quintessential reflection of the will of humans to communicate, to join, to create means of transport, to generate economies and conquer the land. The searching of archaeological signs, the search for gold, again reflect the will to understand the past and secure a future: in this respect Anarcadia, started as the portrait of a nation, becomes the portrait of human nature and its desires, feats, disillusionment, dreams.

Anarcadia was Co-commissioned by Film and Video Umbrella and John Hansard Gallery, Southampton, in association with Stills, Edinburgh, and Ffotogallery, Cardiff. Funded by Arts Council England, and with the generous support of the British Council. Additional support from the Henry Moore Foundation.

It continues its tour in 2011 visiting Edinburgh, Cardiff and Manchester more info here

Emilia Telese is a UK based Italian artist. You can find my new work here https://tinyurl.com/y7orhmcz and old work here www.emiliatelese.com Follow me on Twitter: @emiliatelese