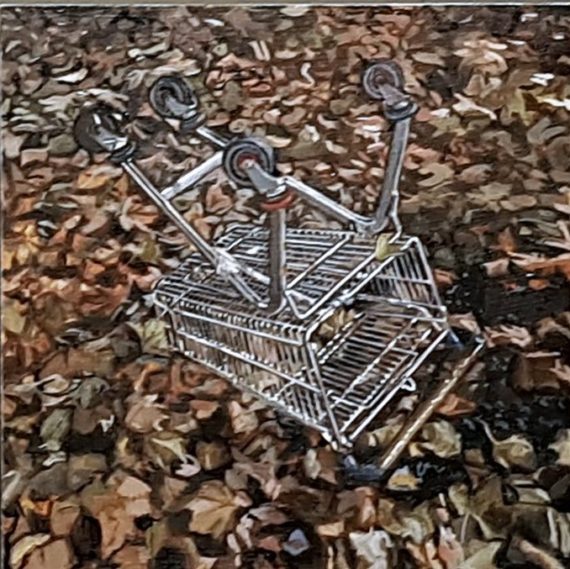 During the national lockdown many artists and students were forced to appraise the question of work size, both in terms of available resources and sale and distribution. Thanks to the ‘artists support pledge’, Instagram was awash with affordable works of a ‘domestic’ scale which were posted out and hung in available wall space. Arguably this was a much needed correction to size being a block for purchasing work.

For the last of this series of ‘locked down’ exhibitions I have taken the liberty of reviewing a show that opened up for visitors as lockdown one was easing. I plumped for this show by Andy Cropper as his works really seemed to resonate with the ongoing and pervading sense of dislocation and social isolation that is emblematic of the Covid 19 era.

This body of over twenty works by Andy Cropper, bears testimony to the butterfly effect of small scaled paintings when done well. They are the living embodiment of the fact that ‘good painting’ impacts well beyond it’s dimensional limits. Even his bigger works are not huge and this intimacy of scale works well for me. The largest works on show measure a modest 100 cm x 100cm, others weigh in at 50cm x 50cm and a good few at 25cm x 25cm.

Depicting nocturnal scenes of inner city Sheffield, these paintings feature stark buildings, street scenes and everyday urban detritus. They efficaciously utilise the dramatic artificial light strategy of Crewdson and Hopper’s night scenes to generate a pervading sense of melancholic isolation and hunkered down human life. As if the city’s inhabitants are hidden away from the social world. For me this work is very much a reflection on urban existence and humanity with all it’s curious implications.

Despite or perhaps because of the lack of people, something very human comes across. This is fed by the knowledge of the locations being ‘well known’ by the artist as opposed to randomly picked. As viewers we tend to look for sincerity in the choice of subject by an artist. Almost as if ‘belief’ or ‘faith’ in an artist’s agenda is ‘everything’. Which I kind of think it is. Albeit a tacit belief, rather than one based on an evidential list. What fosters that belief or trust in any one artist is worth unpicking.

For me with Cropper it lies in his articulated sense of emptiness and the visceral charge that fosters within. It casts one into the position of the lonely night walker or bus stop stander. I recognise some of the Sharrow Vale tower blocks from my time spent living in Sheffield and remember their push-pull visual impact from many a closing time journey up the hill. They acted both as way markers and a reminder that in any place many parallel worlds co-exist.

In the painting ‘Keating House’ part of his ‘Lockdown Triptych’ Cropper has meticulously worked from source photography to render the sombre grey housing block against a sensual blue twilight sky. The image is dynamically composed with a dominant street light, a cluster of leafless trees and a diagonal pathway leading ones eye into the frame. Intermittent rectangles of orange light, show distant glimpses of domestic worlds, high above street level. These are naturalistic and impressively tight in terms of how he systematically layers and builds up the pictures. However the clear evidence of  brush marks when viewed up close,  swerves the work away from the sterility and self-congratulatory cleverness of ‘photo realism’. This mark of the ‘author’ in painting is critical to where it steers the viewer in terms of the modernist legacy.

This subject, its execution and the context of being painted during lockdown all combine to make it a painting truly of its time. It is a wholly captivating image, which rewards the viewer both visually and in terms of sparking up lingering thoughts and questions of how one person’s lockdown was very different to another’s.

In ‘Dying Fly’ an image of an upturned abandoned shopping trolley is painted amidst a sea of Autumn leaves. Its subject and title evoke a comic pathos. Compared to some of the larger works on show it is painted in a more sketchy, painterly and stylised manner. It’s simple composition creates a great visual contrast. Namely between the worst of man’s efforts via an act of pointless consumer abandonment and the cyclical nature of the natural world and the seasons. Let’s face it, our planet which will keep on spinning well after we obliterate ourselves.

Autumn 2020 feels very different to autumn 2019. But as far as the trees are concerned it is business as usual. The issues this picture touches on are massive and extend well beyond the time of its execution and artistic intentions. But then good art should speak beyond itself. At a titchy 25cm x 25cm this painting is a tiny gem with a big voice. This was the first ‘in the flesh’ show I saw after the world started to reopen for a bit. What a treat!