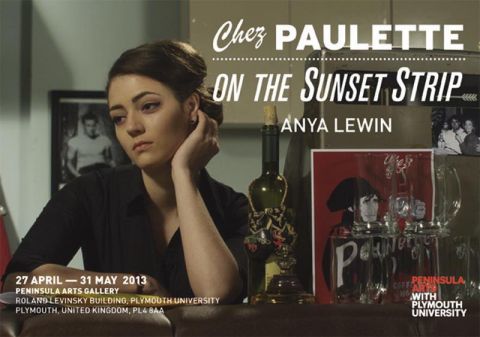 Chez Paulette on the Sunset Strip offers a scene of expanded cinema, of film as a series of events, spilling and spreading beyond the immediate moment of the screening, the immediacy of being seated in a cinema seat, and watching. The skin of this cinema stretches out into the foyer, into the street, the alley … it is phenomenal. – “that colour’s too real” – And in the moment of setting up a sensorama surround experience, it is also returning, always turning back and forth in time. There is the smell of coffee, and the feel of dull green velvet as the vintage cinema seat slaps back. – “cut” – The screened narrative and constructed installation perform a pulling back, a showing of the frame, and then show another frame around that one. – Sc1: Int. Office. Day –

Anya Lewin’s film plays out as an essay on art, on life, on lives; lives that have moved across oceans, running up against the far edge of a continent – “not Warsaw not Berlin” – in Los Angeles, in Hollywood. They all arrive in this world of movies, a new world, so new that cinema (like coffee) isn’t mentioned in the Torah either, nor in the Bible or the Koran. It’s a new thing, needing translation, always shifting and moving between languages.– “my agent says I gotta change my name” – And here in this new old scene we watch modes of representation that have date stamps, ways of showing a man, a woman, that tell stories of a particular time.

The screens become sites for tribal relations to be played out, new tribes and old tribes; among them, a Beat tribe that is the object of curiosity for the squares. The in crowd occupy this lamp lit circle wreathed in smoke, listening to folk music and Beat poetry – “art begins with a lie” – and even within this other zone are others who look on, from the other side of the glass, of the screen, from within other skins, other tongues. – “do you speak Yiddish” –

And this cinematic story comes about via a family (familiar) anecdote, at the intersection of a family history mystery and someone anyone else’s. A crossing where my life, or your life is part of another family’s evening TV viewing, as televisual switches to cinematic, and the workaday denizens of the Sunset Strip cross paths with the stars, and the Star of David is revealed in the decoration of a gateau, in inky black on skin pale white with blue trim. – “Mom! Not now with the cake!” – And other stars are mentioned, their glow boosting the status of the cafe, their names as markers as tokens in the text locating the time place for us, and locating us in a memory play of favourite films, of favourite stars. / Marlon Brando Steve McQueen Groucho Marx Louise Brooks /

Do we buy this yarn she’s peddling us? Can we swallow this fractured narrative? As the director (daughter) detective fills in for an absent colleague, piecing the story together as Philip Marlowe might have done, from some pictures, and bits of paper, working through the archive to find something. To find what? The enigma that is Max Lewin (father Napoleon Caliph) remains elusive slipping past questions, dodging the definitive, coming in the wrong door and edging out again. – “didn’t he play himself” – The artist plays out part of herself, her story, spinning us a line to hook us in, with a catchy family tale. And the outcome is engaging, on physical emotional and sensory levels, it holds us in thrall to the possibility of an answer, a conclusion.

In the crossing again of art and life, of the fake and the real, there is the construction in the far out West of a pocket of European sensibility, and this has returned to another Western edge, in Plymouth, where Max’s daughter has set up her shop, made a life, and constructs a complex art work of image, narrative, and interaction. And Anya Lewin has made a social focus within the gallery that opens out the functioning of that gallery, shows it as artifice, as a set, through the presence of this other film set within the shell. That gallery is itself an institutional structure within another arts structure within a university. But at the core of these Russian dolls, these embedded frames, is a hissing spitting core, the espresso machine on the counter making fresh coffee for the punters as musicians play and poets read. – “you gotta be an actress to be a waitress?” – This present scene, and the moments of conversation and exchange that it facilitates, restages the scene that was set up in Chez Paulette, and was tapped into by the TV show, a scene that offers contact and connection among the layers of the fake, the simulated and the artificial. 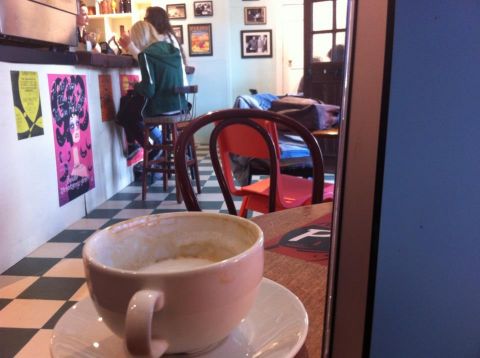