Around and Back Again: Some films at Documenta in Kassel - a-n The Artists Information Company 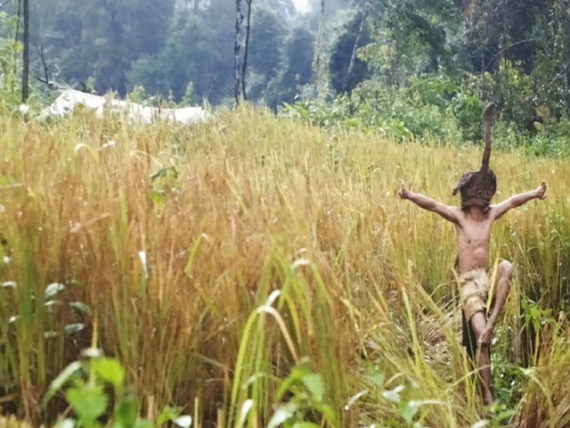 Thanks to receiving an A-N bursary, I had two and a half days to make my way around a vast array of artwork on offer at Documenta in Kassel over the preview days. Already completely bewildered by the end of day 1, I decided that the best strategy was to spend more time with less work. So I dedicated some time to watching whole film works as other audiences came and went, and sought out audio-visual/film work that aligns with my own interests in myth, ritual and ethnographic themes. 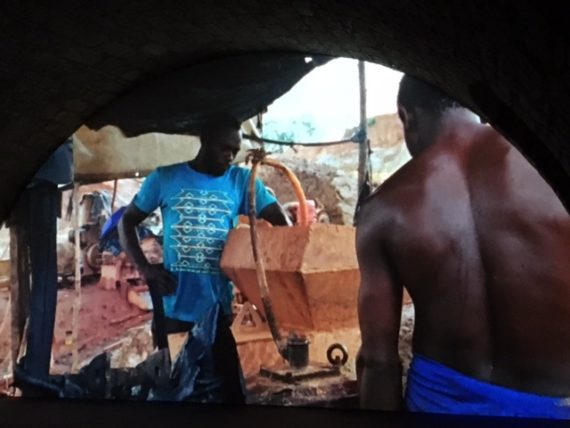 I enjoyed some of the city’s spaces dedicated to just one artist, where I could quietly witness the work unfolding without being bombarded with 10 other competing pieces. Perhaps that’s one reason why I found Ben Russell’s Good Luck (2017) so evocative and powerful. This unsettling four-screen installation spanned the basement of the Fridericianum. The dark cavernous spaces and sense of disorientation while navigating between screens created an atmospheric backdrop for Russell‘s haunting imagery. Shot on 16mm film, I was astounded by a very long take of Serbian workers descending into a copper mine to start their shift, sustained in the most challenging context, (socially and technically, I imagine), not least for the low light levels glaring from people’s head torches and seemingly little else. Saturated 16mm imagery of other workers sifting for gold in Suriname, jarring industrial sounds, combined with interviews and black and white head shots, took me closer to the visceral experience of working in a mine than I’ve ever been. I don’t think his work is entirely unproblematic. It could be argued that his white male perspective aestheticises the workers’ experiences. His approach nonetheless contains reflexive elements and its affective power is undeniable. The fragility of workers lives are glimpsed in their voices as they respond to interview questions on a separate screen. Other parts of the film are overtly staged which I favour compared to a pretense of the filmmaker’s invisibility. Russell also superimposes the viewfinder symbol over the images at certain points, again a reminder of his subjective gaze. Dividing the films over 4 screens seemed to somehow suggest fragmented visions rather than aiming for one coherent whole. 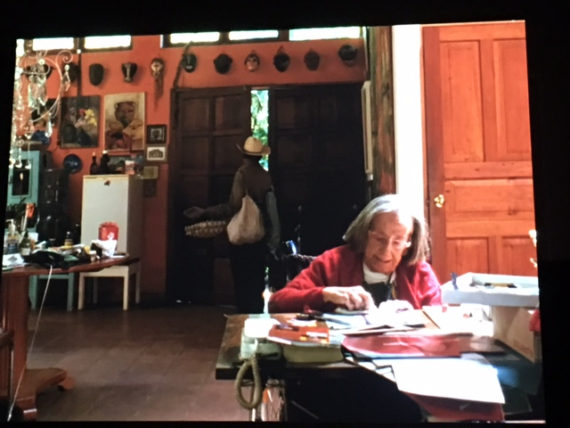 For a more intimate, encounter with her subjects (with perhaps slightly less problematic power relations at work), Turner Prize nominee Rosalind Nashisibi’s Vivian’s Garden (2017) can be seen at the Naturkundemuseum. Again shot on 16mm film, this piece is subtle and understated in contrast to Russell’s boldly confrontational piece. It is a tender and sensitive portrait of mother and daughter Vivian Suter and Elisabeth Wild at home in Panajachel, Guatemala. The Swiss-Austrian émigré artists are filmed amidst the verdant backdrop of their tropical garden alongside their dogs and indigenous helpers. The images appear dreamlike and painterly. If there it any problematising of colonial relations, it is done in a extremely subtle way – Nashishibi presents her subjects in an observational style without judgment, leaving the viewer to form their own conclusions. The tensions and slippages between private lives and public ‘performance’ in front of the camera are also left for us to imagine rather than being overtly addressed. It felt to me that the work could have been longer – themes started to develop and then the film abruptly ended, as if she’d presented just a few scenes from a more substantial piece. But perhaps that was the intention, a partial and tentative glimpse. As a side note, I was much less impressed by Nashishibi’s paintings that were on display in Palais Bellevue. It felt to me that these were unnecessary and less interesting additions to such a skilled and painterly film practice. 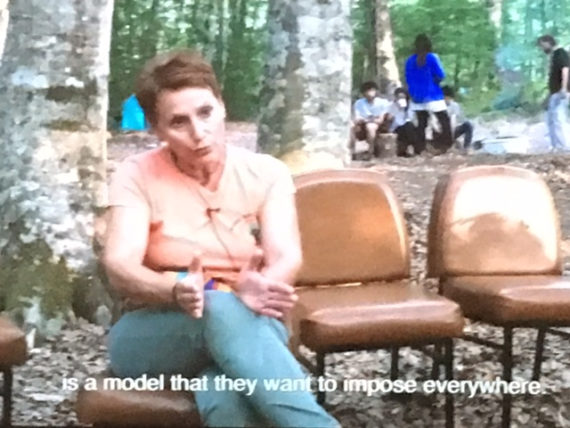 Angela Melitopoulos’s multi-channel film and sound installation Crossings (2017) spread itself within the dome-shaped structure of the Geisshaus. The 4-screen piece is effectively crafted, jumping across and between screens, across time and space to experiment with different elements of the Greek crisis past and present. The work moves between refugee camps in Lesbos and Piraeus and metallurgy plants in Lavrion and Skouries, while voices and inteviews discuss the problems of the ‘monster’ that is capitalism and its complex repercussions for the poor and powerless. The overarching message is familiar to us all. But the awful specifics of villagers discussing local water contamination through mining, for example, were set next to images of pre-historic water channels in the landscape. These bore testament to incredible ancient systems of irrigation and water conservation, an evocative and depressing contrast to today. It was the sound that really brought this piece to life. With 60 speakers floating above my head they created an intense atmosphere that made use of the whole domed structure of the installation. 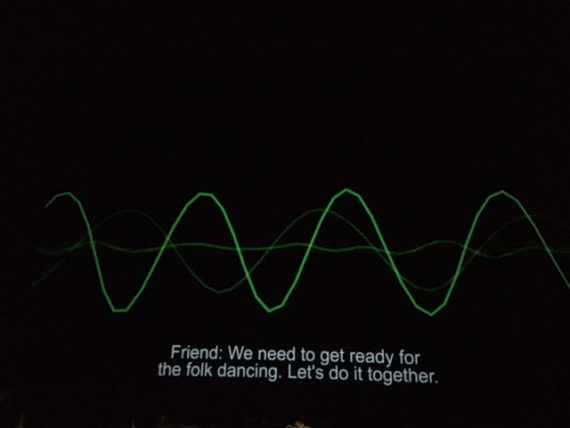 In the recently opened Grimmwelt museum devoted to the Brothers Grimm, I encountered Susan Hiller’s Lost and Found (2016). I’ve always been drawn to her work, and found inspiration years ago in her book ‘Thinking about Art’. This work re-presents languages that exist on the periphery, many in danger of dying out. It was good to re-visit this work, a re-working of other material I have seen before. In this piece she includes languages that are being revived and rediscovered. Voices and narratives appear one at a time in different languages, their tones and rhythms a fascinating auditory experience that evoked a sense of wonder at the human voice and all its possibilities. The meaning of the words is translated through subtitles on the screen alongside sound waves as each word is spoken. Aesthetically the work felt very ‘retro’ with an 80’s style green LED wave pulsating on the screen. She could surely have found a better aesthetic form to represent the work. I was also unsure about the role of the translation, and how it reduced the sensory experience of the voices in themselves. I understood her intention to expose the problem of language translated into the dominant culture, and perhaps the role of technology in documenting and reviving culture, but wondered if this text could have existed separately.

For a Documenta so focused on representing voices from the periphery, I am aware I have so far written about work by white European filmmakers, so I will finally mention  Khvay Samnang’s Preah Kunlong (2017). I was at a disadvantage when I first saw this piece – the credits were not available and neither was any text accompanying the work, (there was a slight, un-Germanic sense of chaos when Documenta first opened to Press and professionals, with some works still being mounted). This 3-screen film installation was on an impressive scale. Tropical Cambodian landscapes were inhabited by seductive images of dancer and choreographer Nget Rady wearing various woven animal masks. He performs within the landscape through twisting and contorting his body, fluidly mimicking animal behaviours. It was only later when I read more on the context that my understanding was transformed from what had struck me initially as a simplistic piece. Landscape and boundaries for local indigenous groups are known and understood through embodied practices, story and memory. The work’s very agency was these alternative cartographic practices performed and translated through the artist’s visions. When viewed in this way, I realized the importance of the work in disrupting non-indigenous understandings of the landscape and contested spaces under environmental threat, and its significance in resisting dominant interests. Samnang’s film forms part of his longer-term work with indigenous communities in the area, including the production of masks, costumes and drawings to convey spiritual beliefs, political concerns, and everyday life. His work shows commitment to helping resist the threat of development in the largest expanse of remaining rainforest in SE Asia.

As I look back over my Documenta experience, I realise that it is the work made in social contexts that benefits locals in some way as well as artists that made the most lasting impressions on me. Many questions are inevitable and necessary when working in a ‘social’ sphere, and it is of course important to still operate within a critical context. But at this time the role of art in working collectively to bring about social and environmental change seems more important and urgent than ever.