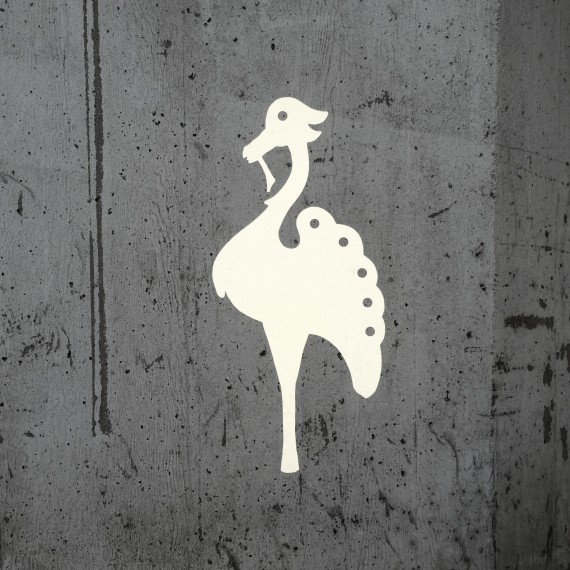 100 Liver Birds have recently appeared on the streets of the city of Liverpool. These ghostly white birds, created by artist Daisy Delaney for the Liverpool Biennial, are subtle interventions blending into their grey urban surroundings. Occasionally their reflective surfaces are briefly illuminated by the headlights of approaching traffic before they disappear back into the noise of the cityscape.

Liver Birds are historic symbols of this proud city, said to be mythical creatures that once haunted the local shoreline. Ever since the bird was first used on the seal that granted Liverpool its city charter, it has developed a complex shifting iconography. Originally thought to have been an eagle, it is now represented as local shore bird the cormorant with a sprig of greenery in its mouth.

Its cultural significance as a symbol of the pride and passion of the Liverpool community was cemented in the early 20th Century when in 1911 two huge Liver Birds crowned the twin clock towers of Royal Liver Building, the new headquarters of the Royal Liver Assurance. According to popular legend the female bird looks out to sea, whilst the male bird looks over the city. Their importance is such that if they were ever to fly away, the city would cease to exist.

But there have been many other, lesser-known Liver Birds throughout the city whose stories have been overshadowed by these two impressive creatures. Delaney’s artwork is based on one such forgotten bird which appeared atop the previous headquarters of Royal Liver Assurance. The Prescot Street premises stood from 1863 until their eventual demolition in 1966 whilst the artist lived in the city. The original Liver Bird that had stood at the summit of its own earlier clock tower, and is the true predecessor to the world famous Bartels sculptures, was consigned to history, abandoned on the demolition site.

Having spent her early childhood in Liverpool, Delaney is acutely aware of the importance of the symbol to the city’s strong sense of identity. As a child, Delaney’s house overlooked Crosby beach and she remembers it windswept with shifting dunes, the sand surfaced with tar balls and the remnants of oil spills. “It is the first stretch of beach along the coast from the docks,” she tells me. “From my bedroom window I could see the ships coming in and watch the oil rigs and the vessels being towed by tugboats along the Mersey.” At that time Liverpool was enjoying its heyday as a transatlantic port and home to the world famous Beatles. The mid 1970’s saw the sharp decline of the container ports and the traditional manufacturing industries and was a turning point in the city’s fortunes and the city encountered years of economic difficulty.

Delaney’s Liver Bird, symbolic of the height of the city’s power and wealth, is today brought back to the Liverpool streets. The artworks she has created are life-size reproductions of this Liver Bird weathervane that once stood aloft the Prescot Street building in the heart of the city. The shape of Delaney’s bird is classical. Its characteristic shape is simplified, with the symbolic sprig of foliage very much in evidence. “I’m happy that the design of this Liver Bird is elegant and well proportioned,” she tells me. ”I hope this is public art that people will enjoy.”

100 Liver Birds is subtly in tune with this busy city. “Most people won’t even notice the Liver Birds,” Delaney says. “And I’m happy with that. If people see them and wonder what they are, then they are successful. I don’t really mind whether people recognize them as art or not.” The work encourages viewers to momentarily engage and reconsider their surroundings. Their response will be personal and fleeting not profound.

Delaney’s intervention into the city fits perfectly within the context of the Liverpool Biennial – an event that integrates itself into the very fabric of the city. Like Delaney’s 100 Liver Birds, the most effective artworks always engage directly with the spaces themselves and with the heritage of their surroundings, contributing to the cultural legacy of the city itself.

In conversation, Delaney hints at plans for more artworks based on the Liver Bird mythology. Her next work will build on this tentative introduction to the lost weathervane, further resurrecting forgotten histories.