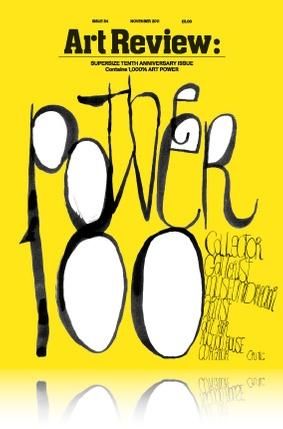 The eagerly anticipated ArtReview Power100 list released November each year gives us a pretty astute overview of the often invisible directors of the artworld, but lacks any ethical reflection. The entrants are “ranked according to a combination of influence over the production of art internationally, sheer financial clout and activity in the previous 12 months”. As such, art-power corresponds to political-power more generally: it follows the same ideas, divisions, and locations. Even more so than politics however, art has the appearance of constantly presenting something energetically new, but if we look closer the continuities belie such hype.

None exemplify this more than this year’s number one most powerful: Ai Weiwei. The artist, who is repeatedly persecuted by the Chinese Communist Party for his outspoken political criticism, was arrested this year without initial explanation. Whilst detained he held three simultaneous major displays across London at Tate Modern, The Lisson Gallery, and Somerset House. He states the issues of his work are ‘mostly about artist’s rights of expression and the ways personal rights are expressed’[1]. His prominence, activity, and moral motivation no doubt deserve the prime position, but he is revered here for all the wrong reasons. Weiwei’s popularity and influence across the world does not, as ArtReview claims, “derive from the fact that his work and his words have become catalysts for international political debates that effect every nation in the world”. In fact, it is the opposite. Ai Weiwei confirms Euro- American status quo values of individualism, freedom of expression and human rights, but with the exciting appearance of dissidence, subversion, and confrontation. He makes us feel empowered as individual viewers, at the same time as affirming a set of beliefs which do little to contest current social grievances in the UK. For example, the just cause against Chinese state censorship does not translate into the just cause for British media responsibly refuse a platform to racist pseudo-historians- rather it alludes to the belief that everybody has the right to express themselves, regardless of the consequences.

This is not to accuse Ai Weiwei of being a sycophant to the West, or to suggest he is gullibly used as piece of ideological propaganda. He is no doubt an activist, agitator, and self-sacrificingly committed to his cause against a single party state. But this activism must be understood as a response to the injustices of contemporary Chinese authoritarian-capitalism. When his work is transported to the centres of liberal cultural hegemony, their dissident quality is dramatically reversed. The problem is the almost invisible element of context.

On this issue, the Power100 does a fairly good job at directing our attention to the secret architects of context. Out of the 100; 29 are Gallerists; 19 are collectors; 13 are museum directors; 12 are curators, and several other entries as Auctioneers, Critics, and Foundation Directors- leaving just 20 artists. The problem is not, as many practicing artists believe, of removing or limiting the role of these actors in order to regain some integrity to their work, and somehow directly connect to their audience in some sort of white cube vacuum; but rather of making the way in which their work is put into a social context visible, allowing us to critique this process as much as we do that of the actual artwork. These ‘contexutalisers’ design much of the social infrastructure of reading and producing art.

Elsewhere in this edition of ArtReview, Chirstian Viveros-Fauné asks us to turn our eye on the Curator. The best at elucidating this role from behind the scenes and into the public eye, is Hans Ulrich Obrist. Curator of the Serpentine in London, friend, colleague, and runner up to Ai Weiwei, he is likewise a polymath, and has set experimented across the boundaries of his practice. He seeks to move beyond the subject/ object relation which characterises material exhibitions, into the social space of ideas. ‘My projects often have something to do with conversations’[2] he tells us in his recently published interviews: ‘Everything You Always Wanted to Know About Curating* *But were to Afraid to Ask’ (2011). And this is precisely his point- he interrupts the idea of a direct exchange between audience and artist, positioning himself as interviewer in his ongoing attempt to converse with as many practitioners as possible. His recordings of these interviews now run over 1500 hours, and his invented format of interview marathons now accompany most of the projects he does. The questions he asks have become a subject in themselves, rather than simply being implicit in the way he stages artists’ works.

Curator Okwui Enwezor enters further down the list at number 52 as the only Black African, and half of the total Black entrants in the whole list -the other being British artist and film director Steve McQueen. (As stated before, art-power is indicative of political power more generally, and the structural discriminations it holds). But Enwezor is not so much interesting because he is himself as an African actor in global arts practice, but because he asks us to consider how the Euro-American Artworld approaches its outside practitioners more generally. Whilst less exciting than the drama of Ai Weiwei’s ongoing heresy, he perhaps mounts a more pertinent challenge to our way of relating art to political power. Instead of exhibiting for the powerful, or indeed against the powerful, Enwezor seeks to exhibit artwork as an explicit element of inequality and change. In Documenta 11 he actively brought together many artists excluded from the international, (not global) arts circuits. More emphatically, his current project Meeting Points 6 stretches from the rigid centre of the EU in Brussles, to Berlin, Athens, Cairo, Beirut and Amman. Here the projects unfold contemporaneously with political upheaval- consciously asking: how artists contribute to civic life and activism in the context of huge political change? Not just in one country, but internationally and locally at the same time. This international project is much more incisive than the transplantation of artworks, which is the profoundly problematic general form of international arts practice this article seeks to address. He explores the artworld not merely as a reflection of political power, but part of it, and to do this his practice must respond to international political relations. Enwezor more than any other, drags the social context in which we view art out of its grey and minimised subtext at the end of the catalogue, and inserts it into the bold and capitalised bright purple title of his projects.

The ArtPower 100 is both conservative and radical. It acts in part as self-fulfilling prophesy adding kudos to those included; but it also undermines some of the power these ‘contextualisers’ possess by making their work a subject of scrutiny and engagement. It points towards an institutional framework that is all too easily obscured. But our approach must go one step further than ArtReview. It is not enough to merely expose and see the powerful: they must be judged. What goals do they pursue? Who gains from their power? Who looses? What is at stake? This injection of ethics begs a renewed consciousness in arts and curatorial practice, asking: what should art do? A discussion I am sure Ai Weiwei, Obrist and Enwezor100 are all keen to stimulate.