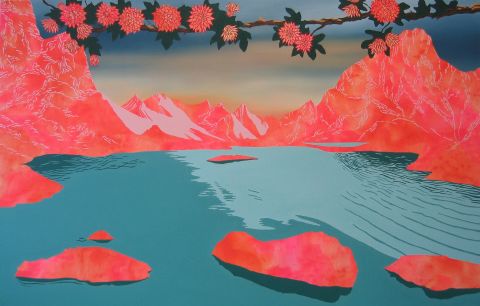 It is the third year of the At Play exhibitions at South Hill Park Arts Centre, Bracknell. The At Play series of exhibitions looks at the actions and concepts of play but more importantly looks at the way adults play or by trying to engage adults to play again and retain a childlike wonder of the world. This particular At Play exhibition, At Play 3, also explores, as it says in the blurb “play as a way of making sense of the world or of escaping from it and contemplates both the pleasurable and sinister aspects of play“. This exhibition certainly seems to do this with a selection of artworks that are inherently playful but also including artworks that have a darker side to them, some more obvious than others.

All of the previous At Play exhibitions have also been large, taking over the majority of South Hill Parks temporary exhibition spaces, sometimes even interacting with the rest of the building and the grounds. This years is no exception, spanning three exhibition spaces, which are each loosely themed. Due to an interest in the landscape it seemed appropriate to look more deeply into the Mirror Gallery space that includes works that specifically include the landscape in some form, rather than try to tackle the entire exhibition.

The landscape is a very well known part of art history and the works in the Mirror Gallery certainly explore more unusual and playful aspects to this history. They all manage to distort widely held notions of the landscape in some way, from the luminous and unrealistically coloured paintings of Frances Greenough to the monochromatic insect eye level views of weeds by Beverley Matchette-Downes.

Frances Greenough’s paintings echo foreign landscapes and the luminous colours used hint towards modern consumer culture. They contain a wealth of contradictions managing to be both believable and unbelievable, beautiful and ugly at the same time. Ideas of the sublime and idyllic have been present in art that depicts the landscape for centuries and these are no exception. “Untitled 1” with it’s pinks and blossoms evoke Japanese landscapes while “Unititled 2” is more evocative of the Canadian mountains, both however tend towards landscapes that are thought of as being idyllic and sublime rather than ordinary. The reliance on a simple graphical portrayal and the luminous and unbelievable colours and contrasts used are reminder of the over-saturated postcards of the 1970’s, which are over-saturated in an attempt to make a place look always sunny and so more inviting, coming from the idea of trying to sell a place. Something the sublime landscape in art also does, Joseph Turner often producing paintings that had great impact with unusual, unreal or highly emphasised bright colour depicting the more violent aspects of the landscape. Constable also was another that depicted what he saw as the idyllic landscape although he tended towards the picturesque rather than the sublime.
The question with Greenhough’s paintings is not is this a real place but is this a perfect place?

Beverley Matchette-Downes’ prints (a series entitled Edge) are unusually hung under one set of the large windows that make this room so suited to the theme of the landscape, you are actually reminded of the landscape where ever you look, to the more formal Italianate style gardens through one set of windows or the entrance, road and parkland through the other.

It takes a moment to resolve the blocky lino-cut prints into discernible and understandable imagery. The low hanging helps immensely in this, as through the harsh monochromatic images delicate flowers and strands of grass appear, almost at the expected height of the real plants. The blocky lino-cut technique adds weight to the imagery and echoes the invasive nature of these roadside weeds. The placement is playful and works well with the images almost expanding the real windows above to look at the weeds beyond, not that there are any with the new Heritage Lottery funded restoration work happening outside. But even this serendipitous combination adds an interesting twist on Matchette-Downes prints and a greater emphasis on the entire room.

The two other artists in the room, Penny Matheson and Steve Perfect, both seem to fit well to the theme both of landscape and to the over arching idea of play. However both have issues that should be addressed.

Penny Matheson’s British Biker, a motorcyclists helmet fused with the aesthetics of a phrenological head, fits into the room well, referencing both the play of adults and indirectly the landscape. The use of the phrenological head is an interesting way to show peoples modern day interests, however through using things like Lara Croft and Braveheart on the helmet it is concerning that she is playing to a series of stereotypes and not really looking at the deeper motives for motorcyclists. The associated literature doesn’t help with this issue, she could be naively producing a set of stereotypes of the male British biker using the phrenological head as a method of representing them or her choice of the phrenological head, now understood to be a pseudo-science, could be an intentional method to make the point that these stimuli are assumptions held by many of the British biker.

Steve Perfect’s At Play series of photographs are conceptually highly interesting. Looking at disused play areas is evocative and well suited to the theme of At Play 3, highlighting those areas where play has been halted and become not only a dilapidated area for play but potentially a dangerous area with damaged equipment and the detritus of divisive adult play that so often finds itself in less used places like these. His concept requires that the aesthetic of the images reflect the disused and depressed nature of his subject. As such there is a lack of sunshine and blue skies in these images which really works to highlight the theme. As do the dull matt grey frames.

Unfortunately in a room that contains both strong monochromatic works and the almost luminous landscapes of Frances Greenough, Steve Perfect’s wonderfully dull photographs are too easily lost and run the risk of not being appreciated or remembered. Larger photographs might have helped add impact to the works and allowed all the works in the room to acquire a more even balance. Interestingly the restoration works in South Hill Parks grounds add to the pathos of the images. Through the windows the restoration is obvious and exploring further in the grounds you even find a play area being recreated, inside the room the not so lucky areas remain dilapidated.

Overall I found the Mirror Gallery aspect to the exhibition to be well thought out. It was a good choice to have as a space for works about landscape, with its large windows, mirror and newly restored grounds and gardens outside reflecting the works inside. Finally, it is always tricky to hang group exhibitions when one image may overpower the others and this room certainly could have suffered from that, but it seems that while maybe not entirely eradicated, it has been carefully curated to lessen this as well as being intriguing and unusual, something vital to an exhibition that is all about play.

At Play 3 is on at South Hill Park Arts Centre until the 19th June 2011. www.southhillpark.org.uk