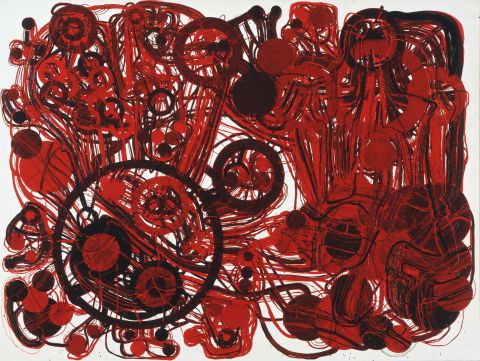 A finger hovers over a plastic switch with Japanese script on it. A man, boldly dressed in a red jacket, shrinks into visual nervousness as he contemplates whether this everyday object should be pressed. It is a dilemma that seems to confront visitors to the retrospective of Atsuko Tanaka’s work at the Ikon gallery. He tentatively presses the switch so lightly that a quaver of sound leaks into the gallery. Another man joins him at his side, dressed in a contradiction of casual sports trousers, trainers and blazer. With encouragement from his companion the man in the red jacket presses the switch for a few seconds. The peace of the gallery erupts into a multifarious ricochet of piercing doorbells, the kind that one might hear in a BBC sound archive. The artist, Atsuko Tanaka created Work (Bell) [1957] by connecting 20 electrical bells around the exterior of the gallery space that would ‘…achieve the acoustic effect of bells ringing at a volume that diminishes with distance.’ Kato (2011)

The work was originally conceived in response to the movement observed in the 5cm blue border of a 10m piece of pink rayon fabric, thus the placement of the bells around the border of the gallery creates the aural sensation of movement. Hasegawa & Kato (2011)

Work (Bell) occupies dual territory; providing the intimacy of a lone action that also gestures to a multiple audience. The work comes alive in different guises depending upon how individual viewers interact with it. A single action sets up sequential sets of responses.

A children’s workshop, in full swing in the gallery suddenly comes to an abrupt break as the bell is rung for a long time. As the sound echoes the viewer becomes accustomed to it and as the noise abates silence seems the odd one out.

Atsuko Tanaka emerged from a post war culture that confronted a fractured tradition of Japanese society but this enforced divorce from the past also paved the way for a radical approach to creative expression to emerge. Tanaka engaged with a breadth of process and material creating along the way, extraordinary objects such as the Electric Dress (1956), a symbiosis for body and object. Exhibition Guide (Anon)

Where Work (Bell) is reliant on the activation of sound to attract attention, Electric Dress effortlessly seduces the viewer on a visual level.

The Electric Dress is both static and in motion, a ‘dress’ that Tanaka rendered from numerous cylindrical and sausage shaped electric light bulbs which she hand painted and daringly constructed herself with little knowledge of electrics. The dress was worn by Tanaka as a ‘ performance in the second Gutai Art Exhibition in 1956.’ Exhibition Guide (Anon) The performative element is critical to the work and can be seen as originally intended, on filmed footage (Documentary Films 1956 -62). The grainy films are a mix of black and white and colour but the dress in motion appears to be alluring and seductive. Electric circuitry ‘en plein air’.

The dress lights up for 30 seconds every 3 minutes and when illuminated attracts viewers like moths. A man in a brown leather bomber jacket looks at the dress in its dormant state, with curiosity. It lights up. He seems relieved, comes over to where I am making notes and says that he wasn’t sure if it would light up and that maybe the expectation was part of it.

A young woman walks over to the dress, it lights up again. I catch a glimpse of her face, illuminated. It is film like, though her expression remains passive and without emotion as though temporarily transfixed by the action.

The drawings and paintings in the show are complex and detailed with colour being applied in bold circular gestures whilst drawings appear as delicate diagrams of rhythm and frantic connections. The work on canvas and paper extend the idea of movement that Tanaka established with pieces like Work (Bell) through the tracings on the surface. By laying the canvas on the floor the artist applied a very direct methodology of working, communicating infinite and subtle concerns. Barboni (2011) Exhibition Guide (Anon)

A woman in a yellow dress, black belt and with her hair clasped in a bun reminiscent of the 1950’s looks at the series of drawings titled Drawing after ‘Electric Dress’. She and her female companion observe the work whilst sharing anecdotes animatedly about their social circle of friends. Simultaneously gossiping and observing they appear to demonstrate that skill attributed to contemporary women of “multi-tasking”, (a lead badge handed out to females at birth). Another layer is added, when incoming texts fly in furiously to their mobile phones.

As they approach the Work paintings which are composed of a myriad of circles and lines of paint, they experiment with staring hard at the imagery and then walk around the room with closed eyes, the remaining ghost images like a Stan Brakhage film dancing on their eyelids. I wondered whether Tanaka would have enjoyed this way of looking at her work? She seemed in possession of such a multi faceted approach to ideas and materials that I begin to think she would have loved it.