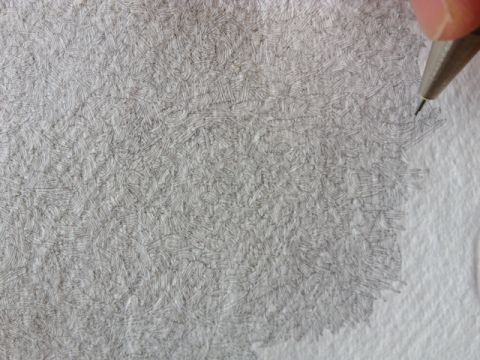 In The stage of drawing: gesture and act (ed. Catherine de Zegher, London, Tate, 2003), Avis Newman writes that she has ‘always understood drawing to be, in essence, the materialisation of a continually mutable process, the movements, rhythms, and partially comprehended ruminations of the mind…when we look, we enter the intimate space of a work that is as close to the action of an artist’s thought as one can get’.

This intimate and immediate nature of drawing was eloquently demonstrated in Autography at The Nunnery Gallery. The exhibition was the second in a series of three shows presenting the hypnotic work of Outsider artist Madge Gill, who died a recluse in 1961, alongside visual responses by contemporary artists. As reinforced by the exhibition title, drawing shares autographic properties with handwriting – a gutteral, unmediated honesty that communicates both the manual gestures and mental processes of the artist/author. In Autography the intricate, labour-intensive pencil drawings of Jack J Hutchinson were presented alongside a selection of Gill’s work, entering into an absorbing dialogue with her similarly intensely worked surfaces. What Autography revealed through the juxtaposition of Gill and Hutchinson’s manifestations of drawing processes spoke as much of the nature of drawing as a generative, instinctive practice as it did about the individual visions of either artist.

In many ways the work of Gill and Hutchinson appear to be natural companions, characterised by the obsessive, compulsive and seemingly unconscious mark making of both artists. The haunting images of melancholy female facial features that populate Gill’s geometric environments are mirrored in the drawn whirls, lines and microscopic marks that are characteristic of Hutchinson’s delicate works. The formal qualities of both artists’ work look beyond the concerns of perspective, form and composition to create highly worked surfaces, often covering the entirety of the paper with lines, shapes and abstract gestures. There is an otherworldliness suggested by the alternative landscapes created by Gill and Hutchinson, where the intensely drawn marks appear to create themselves like the automatic writing suggested by the exhibition title, as if guided my something other than logic. The otherness of Gill’s untrained drawing is reinforced by her allusions to her spirit guide Myrninerest (my inner rest) in the cryptic signing of her work in that name. In turn, Hutchinson’s work is at its most beguiling where the marks become less mannered and formulaic, and too infinitesimal to distinguish as individual lines. In these works, where the drawn marks are almost too small to focus on, a fluidity of dimensionality occurs, as if the paper surface collapses in on itself revealing an infinite space beneath.

For both Gill and Hutchinson drawing is a language through which to explore and reconcile personal challenges and experiences. Gill’s drawings emerged from the pain of huge individual tragedy, the loss of two young children and subsequently her health. Some of her works were created in bed or in times of extreme emotional distress, with the recurring image of a female figure with an oval face and large eyes often attributed with being a manifestation of Gill’s stillborn daughter. In both the candid blog written by the artist to document the development of his work for Autography (www.a-n.co.uk/p/2296940) and an interview for AN Artists Talking by Andrew Bryant, Hutchinson discusses his own relationship with physical and mental challenges and their arbitration through drawing,

‘An obsession with completing repetitive tasks has been part of my life for a long time. When I was a teenager I suffered from OCD and at times it got a little bit out of hand, with particular numbers defining my actions on a day to day basis. Drawing became a productive way of channeling these urges.’

The works in Autography began to illustrate the personal relationship of each artist to the work that they create, and moreover suggest the capability of drawing to record the trace of the drawer, in a fluid relationship between self-awareness and lucidity.

The practice of drawing has the potential to allow an individual the possibility to withdraw from consciousness in the process of making marks – the repetitive nature of the drawn gestures of both Gill and Hutchinson suggest a certain uncoupling of the physical and mental stages of drawing. The results of this as displayed in Autography were mesmeric, in which it was conceivable to see that the drawing process itself had a role as a conduit for authorship, affecting form, content and expression. Despite the differences in scale and presentation of the works in the main gallery – Hutchinson’s diminutive drawings vulnerably presented unframed on shelves surrounding Gill’s nine-metre scroll encased behind glass – the dialogue between the two artists’ drawings was fascinating. The relationship between the works of Gill and Hutchinson in Autography went beyond an appreciation of the nuances of their individual visual languages and touched on the language of drawing itself.