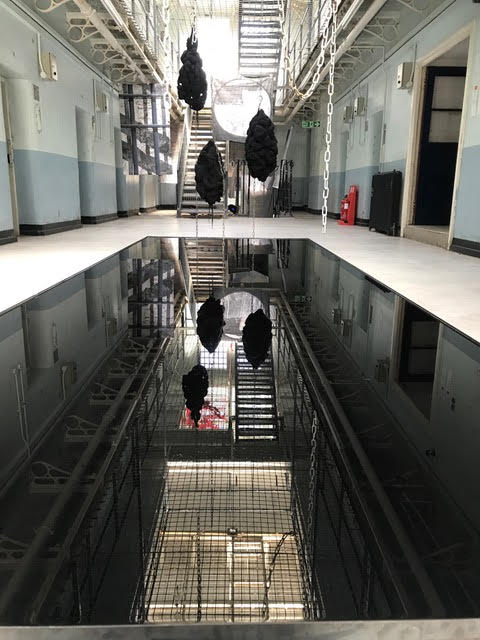 A building is more than just bricks and mortar, it carries folk-memories and societal baggage. Before its closure in 2013, B-Wing of HMP Shepton Mallet held men found guilty of committing only the most heinous crimes, for which they were sentenced to life imprisonment.

In 2019, B-Wing hosts a group show in which co-curators Luminara Star and Fiona Campbell have brought together a range of installation, performance, and multi-disciplinary artists to work in response to both the physicality of the building and the ideas surrounding it.

Many of the cells form exhibition spaces for individual works, while a small number of larger pieces fill the centre of the space. Scott Sandford’s IN.BRS.2019.38 fills the wall of the first cell I enter. I get to see what I would look like on a bed in a prison cell. I have just arrived and I’m still processing the fact that I am even on the premises, let alone inside a cell. I’m staring myself in the face trying to transcend my position in this space at this time, under these circumstances, but the door is wide open and there are people milling about. As my mind begins to settle my thoughts turn to what might have happened here. What was done by who and to whom. Perhaps someone died in this room. Maybe even took their own life. I can never know. I can, at any moment, get up and leave this place. I like the immediacy of Sandford’s work, but with a stated aim of putting the viewer in the mind of the prisoner, IN.BRS.2019.38 is an attempted shortcut that falls short.

Back in the building’s main atrium, Sandford’s water-filled tank (6x2m), is equally affecting. This piece is a collaboration with Lou Baker, whose felted handknitted works hang from meat hooks on metal chains above the tank. Some of the chains extend down into the water, suggesting a continuum, as though these great knots are being submerged and raised on a cycle. But the illusion cannot hold as I later discover that the tank is only four inches deep. Everything here is black; black wool, the blackened metal edge of the tank and its liner, and the water coloured with black dye. Its mirror-like surface drawing a neat line from Sandford’s cell installation to this. Baker’s knitwork also appears in the adjacent cells and shower room. Entering the latter, my mind is already abuzz with the powerful mythology that surrounds this part of the prison. Over decades, film and television – whose influence on a reading of a location such as this is inecsapable – have taught me that the showers are a dangerous place,  and I connect that with Baker’s suspended knots. It is as though they hold time in their form. They hover like placeholders for the darkest events that have occurred in this place. Like ghosts they loom, unresolved; menacing.

Baker’s work follows me from cell to cell. A continuous piece of knitted red wool stretches along bannisters, in and out of cells and shower rooms, and over and through the metal netting that is strung between the narrow walkways that line the central space. They evoke entrails, dropped onto the netting, that now seep through and down to the floor. They call to mind the reason the nets are here and why they’re sprung: to catch the fallers, the jumpers, the thrown.

Luminara Star has channelled ancient rituals in her multi-cell installation piece, Skuggi (meaning ‘shadow’). In one cell, bedsheets are folded neatly at the foot of the bed where a spell has been cast that coincides with its making. Undress it and the spell is broken. Star’s installation includes printed works – a series of runic alphabets and part of the Norse myth of Yggdrasil, the ash tree that gives life to the earth by the water that runs off its evergreen branches. The tale tells of three maidens that carve into its bark the lives and fates of children. A third sheet, embroidered with the last of three spells, hangs over the threshold of an adjacent cell. These works talk of reverence, patience, and fate. Trust and faith also come to mind, and these are foremost in Star’s work with posies – small bouquets of flowers, gathered by Star on her walks in the surrounding area throughout the duration of the exhibition. At my time of visiting, a single posy hung in a cell that also contained ceramic work by Lucy Large and a written piece by Alice Madicott that the viewer is encouraged to carry with them and read as they walk through the exhibition. These quieter works, along with Large’s Held, a cell that is part-wallpapered, but in which that wallpaper bleeds out over the furniture and floor, require more commitment from the viewer, but spend some time with them and B-Wing becomes an entirely different show, addressing the location and its inherent themes in a way more subtle and considered than the large-scale installation pieces in the main atrium.

The third floor of B-Wing has been given over to a collection of poetry and readings relevant to the exhibition on the floors below, and will host live poetry events towards the end of the exhibition’s run. Incarceration, separation, and punishment are all present but by its very nature the work on this floor feels more like an exhibition that accompanies the physical work below. The two standout pieces were both by Rosie Jackson. ‘One Little Roome An Everywhere’, winner of the Wells Poetry Festival prize in 2018, glimpses into the life of the Anchorite, a type of medieval religious recluse who lived in a single room, away from society altogether. The other, ‘A Mother’s Lament, or, Eve’s Letter to Cain’ rings loud and clear in 2019, where toxic masculinity is on the ropes, and where we are repeatedly reminded of the need for mindfulness in relation to our mental health.

Fiona Campbell has installed two large scale sculptures that bridge the gaps between the balconies and floors at B-Wing. These hand-made, purposefully rickety ladders suggest the futility of any attempt to escape. Campbell’s ladders are roughly hewn from untreated wood and timber and balance precariously on bannisters and metal netting.

The final piece I encounter is also by Campbell. It is an empty cell titled ‘Dawn Chorus’. I sit on the metal framed bed – what else is there to do in an empty cell? – and the sound of birdsong fills the room. I close the cell door and my focus shifts to the barred rectangle of light, high up to my left. The sound of birds becomes my image of the outside, and soon those birds are the entire world. Fields and hedgerows, roads and homes; all are present in this piece. Nature is our constant companion, one that we can always count on, and incarceration goes to great lengths to remove it from the life of the prisoner. Is there any more fitting symbol of freedom than a bird in flight? It is fitting that this is the final piece that I encounter on my walk around B-Wing, for it succeeds in achieving that which the mirror piece only briefly managed – it locates me here in more than just a physical sense, and it achieves this by leaving a space between my own situation and the work. I imagine myself sleeping facing that grated rectangle of light that represents everything that is absent. I’d listen to the birds and I’d spend the rest of my life dreaming about the outside world. Or perhaps I would become inured to such dreams, and instead become wholly institutionalised, learning to fear the outside world as represented by that small rectangle of the outdoors and its birdsong soundtrack. The truth, of course, is that I can never know.

This review was commissioned by Luminara Star and Fiona Campbell, co-curators of B-Wing.