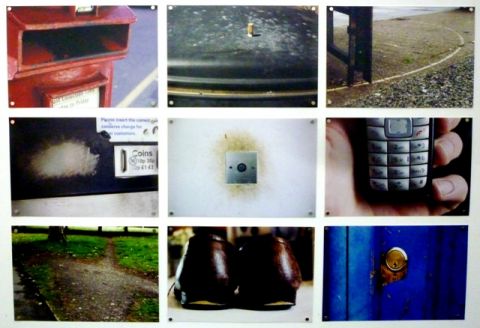 Defining what to expect from Central Saint Martins’s BA Criticism, Communication and Curation degree show was not easy at all: Fine Arts, or any other visual arts branch, are all about creating and exhibiting, but From Work To Text’s subject matter is rather different. It’s what stands behind the exhibition; not what happens in it, but what makes it happen.

jotta spoke to Emily Burrett, one of the recent graduates, and rapidly found out that the students themselves felt this same concern at the beginning of their curatorial adventure: how could they make their degree show unique, exploit their knowledge at its best to do something that had never been done before?

The answer lies in a brilliant exhibition, set in the Innovation Centre, and made possible by the students’ collaborative and creative efforts. It’s the first time a Curation degree show takes the form of an actual exhibition instead of a series of dissertations and talks; “to show that you’re a good curator”, said Emily, “nothing’s better than setting up an exhibition with your own hands.”

Team work was vital to the degree show’s success: the graduates discussed and decided everything together, from the choice of the artists to the content of the catalogue and written captions (not the usual curatorial asides to the displayed works, but a sort of diary, narrating every aspect of the exhibition process). There were also plenty of challenges, of course: the exhibiting space itself, with its uneven walls, high ceiling and confusing lighting, was not exactly what the young curators had hoped for, but they managed to make the best of it anyway, and match each artwork with a position that enhanced its qualities.

Among the artworks, I particularly appreciated Luke Moran-Morris’s creations. Mostly a photographer, the Kingston University student contributed a much more varied range of material, which not only includes photography, but engages with film-making and conceptual art as well. Alternative America, a collection of photo streams from Moran-Morris’s trip to the States, stands out for its organization as interactive DVD, allowing the viewer to choose autonomously which aspects of the experience to explore.

It’s a shame that From Work To Text had such a short run (June 20 – June 23), as it deserves longer: apart from the appeal of the exhibited artworks, what ignited my interest was the opportunity to focus not just on the artists, but on the people and processes that allow their talent to be recognised and showcased.
The ultimate nature of the relationship between curator/critic and artist remains the most controversial and fascinating of all curatorial issues, but the balance found by CSM’s graduates is totally satisfying, and made the show really worth seeing.