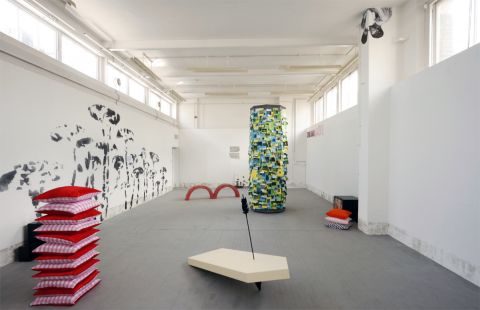 The Slade BA degree show really gets off on materials, room after room of playful responses to cement, scent, stuffed textiles, rotting timber: enjoyed for their own sakes, rather than exploited to render any particular ideas. Playful: vapid, even. Ashley Howell’s forms have muscle, though – her investigations into the structural and surface qualities of the cement she works with show through and the forms seem to stretch the possibilities of her medium. The Future Took Us, taken from a John Shevlin poster, isn’t the show’s title, though you’d be forgiven for thinking so as it dominates the entrance to the show; though slick, it suggests to me a more passive response to our potential to make action that I’d expect from the final show of the art school that led the fight for arts education in London last winter. Maybe I’m missing something.

The most visceral piece for me is Aaron Angell’s throwaway Farrington’s Folly – graphite coloured paper torn back from the wall it’s glued to, forming marks that echo Yves Klein’s Anthropometries series; more seductive as you back away from the wall to see mushrooms revealed. It faces Bentley Farrington’s Standing Stone (Visitor’s Approach), a column covered in photocopied images on fluttering paper and punctuated occasionally with bubblegum. I’d walked past this monument initially, but seeing that the title of Angell’s Folly referenced Farrington’s column, I returned and paid more attention and was rewarded with a closer grasp of the energy of the piece. Both have plenty more in the show but these did it for me. Ava Ireland’s use of paper and paint like an old carbon blue brings energy to her map. Once you realise how she made the piece, the memory of of her process remains with it. Nice.

Alejandro Cano’s giant animals drawn across standard office A4 white and held with loop-ties are another highlight for me, the whale that once straddled the front portico of UCL now lies crumpled in a heap, others archived in wooden blocks whose thicknesses suggest the size of each creature’s original visual A4 manifestation. And although Ch Gh’s political work can seem didactic at moments, the DIY garden shed tool display of wooden guns, his Peasant’s Revolt, is tucked away but well worth seeking out: a reminder of both our part in embracing the future and Slade’s recent lead in demanding that we roll up our sleeves and take the bastards on. It turns out this piece was made during the Slade Occupation. That’s more like it. 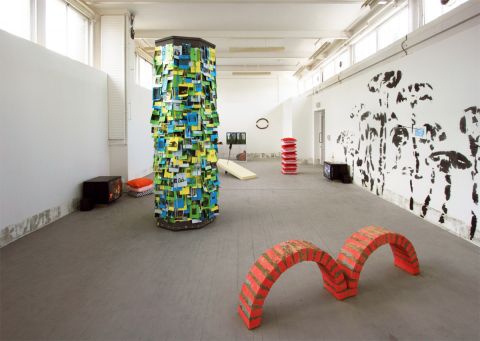 Just coming to the end of my first year fine art degree at Chelsea College of Art. I'm a part-time student there and I pay the mortgage through freelance journalism and teaching. Day-to-day art work can be found at fionaflynn.wordpress.com