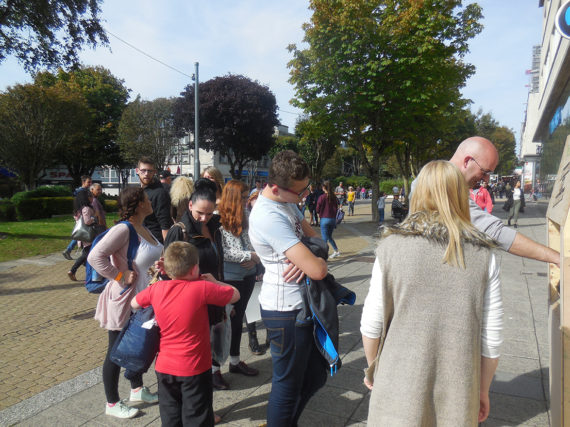 What was the inspiration behind the piece?

The piece is an artistic attempt at furthering my understanding and creating debate around what money is and how it is created by the banking system. I studied economics years ago but found little truth in what was being taught. Ridiculously, we sat a module on bank reserves and the systems in place which ensure a bank run could never happen in the UK, just a few months before Northern Rock ran.

I have since gone down a more creative path, recently completing a Printmaking MA. But Graeber’s book ‘Debt : the first 500 years’; Ann Pettifor’s ‘The Production of Money : How to Break the Power of Bankers’; and Ben Dyson’s ‘Modernising Money : Why our Monetary System is Broken and How to Fix It’ have reignited my interest in this subject.

One thing is to read that ‘money is an state sanctioned system of I.O.Us’ in an economics book, and another is to print and sign 200 notes stating that ‘I promise to pay the bearer on demand the sum of £5/£10/£20’ and give them out to a bunch of strangers. 95% of money is created in this way, banks produce it out of thin air. I was really nervous people would demand the sum of £5/£10/£20, and that I would have to arrange a bailout from the Bank of England, but luckily most participants were happy with the handmade notes.

Did it go well?

Yes, there was a really good response from a whole bunch of different people. Lots of giggles! Kids were encouraged by their parents who were often too nervous to interact, and whilst it was great to have a lively queue form on the Saturday, Sunday was very special in a different way. It was rainy and most people were just walking by trying not to get too wet. Occasionally though, curiosity got the better of someone and they were drawn in and surprised by this unexpected addition to their day.

More interventions questioning what money is and who the banking system creates it to come. This September marks 10 years since Northern Rock and next September 10 years since the collapse of Lehman Brothers, so I am focusing on this topic for the year ahead. Why is it that the only institutions with the power to create money from thin air – the banks – need subsidising? Central banks are still pumping hundreds of billions of dollars into the global banks still, after 10 years. It is baffling!

I believe we need more artists trying to make sense of the economy. The current system is falling a part and spiralling debt and inequality are symptoms of underlying flaws in the current system. A few bankers have spent the last 30 years shaking the money tree and raking it in whilst our prime minister denies its very existence.

Lets denounce the entrenched economic myth used to justify years of austerity and celebrate the possibilities!

For more on BankRUN at the Plymouth Art Weekender

As a materials-led artist and maker working primarily with found materials, I forage, gather and reuse everything from cardboard to pallets and wooden fruit boxes. I am driven by a desire to celebrate the overlooked, for instance printing the utilitarian symbols I collect from packaging, onto the other materials on which they are commonly printed. My work combines elements of design, paper engineering, fine art and construction, and is made available through limited editions, as well as informal interventions in the urban environment. See : www.laralunabartley.com