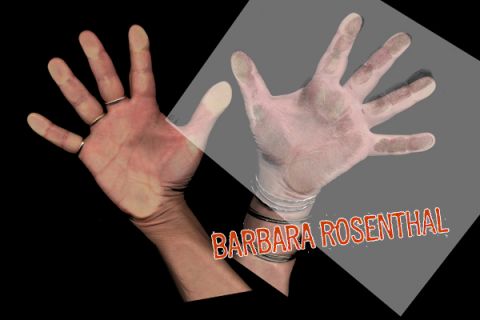 With characteristic showmanship and panache, international performance and media artist Barbara Rosenthal introduced three of her video compilations to several eager audiences in Melbourne, Australia this month, with talks billed as “Authenticity in Art” and “The Medium is NOT the Message.” Touring Melbourne, Sydney and Brisbane as a guest-of-the-fest of Channels Video Festival, and hosted in Melbourne by Monash University and Victorian College of Art, this bold, frank, energetic, introspective, self-effacing, idiosyncratic 65-year old New York avant-gardist noted as “Old Master of New Media” during her winter tour of Europe, presented here an overview of her philosophy of art and of her career, as she launched into screenings comprising almost 50 of her over 100 video shorts, with questions and discussion after each program.

Barbara Rosenthal, a deep thinker known for expressing Existential themes in her art, is a passionate character with wild red hair, bursting with words and ideas, prolific as an artist for 50 years. She takes from her own life everything she encounters – physical objects, experiences, family members, clothing, medical data, landscapes, buildings, insects, animals, discarded papers, old rags, her dead father’s architectural supplies, her children’s toys, speech patterns, her own body, etc. Everything seems to be fair game for her to draw upon, and through relentless reflection and introspection, coupled with her photography and drawings, plus puns and phrases by herself or from the fiction and cartoons she reads, turns into original, metaphysical, and sometimes absurdist art, revealing insights into what makes us human. Her material all comes from her own life, yet everyone else can relate to it.

Her work tells us about ourselves. And often in a very funny way. At many videos, we burst out laughing. Yet, at many others we are aghast at an undertone of violence, of aberration, discomfort, rejection. Her process – turning experience into art – often entails her use of the Journals (capital “J”) she’s kept since age 11, twelve of which will be put on display at The Center For Book Arts, NY in January. She tells us that many times her ideas spring whole, and can be seen on the pages, as she records an experience, which yields an insight, which sparks a project. “I don’t try to think up something to make art,” she says, “and I don’t ‘illustrate’ a concept. The art makes me make it. And if there is an analysis or interpretation, it comes AFTER the work.”

We talked about new technology and the effects that social media have on journal writing today. Rosenthal believes that Facebook is sucking analytics away from journal writing and writers. Whereas a daybook lets our thoughts run free in our own privacy and own time, now we answer to Facebook about how we feel, and endure comments ready or not. Although she nevertheless has several Facebook accounts, which she designates for selective purposes, she encourages people to keep notebooks besides, or otherwise much is lost, especially meanderings which lead to deeper ideas.

Some or Rosenthal’s “deep ideas” refer to the difficulty and absurdity of true communication altogether, such as in “Nonsense Conversation”, an improvisation with her daughter Ola Creston, when the child was 9, and “Semaphore Poems”, initiated and performed by the late poet Hannah Weiner, against a vast mountain range to the soundtrack of many birds. Other ideas refer to the similarity and dissimilarity of individuals, such as in “Secret Codes”, which depicts palm prints to a relentless soundtrack during which the following words in English, German and Yiddish repeatedly traverse the black screen in shades of gray: “That which on first glance is alike, on closer inspection tells us apart.”

Barb Bolt, a contemporary art historian in Melbourne, and Chair of the VCA graduate art program, commented on Rosenthal’s variety of emotions between the videos in the compilations “Nonsense Conversation and Other Shorts” (Sept 17) and “Existential Word Play” (Sept 18). “I’m captivated by the formal devices she uses to get her messages across,” said Professor Bolt, “her manipulation of sequencing and audio tracks, her build-up of rhythm and repetition, her divisions of space on the screen, her presentations of tension and release, her relentlessness and endurance. I call this her ‘choreography.’

“Rosenthal’s use of devices, such as disruption, causes a rethinking, and, in formal language, produces emotive effects. Her visual art induces a kind of synaesthesia when such things as rhythm, repetition, decrease of space, etc, provoke an intensity that you just can’t stand any more, such as in ‘Dog Recognition’, and then suddenly she relaxes us immediately into ‘Postcards.’

“These things put Barbara Rosenthal undeniably in the realm of Conceptualism,” continued Professor Bolt, “but they operate on the level of affect, which we read as meaning. Her incredible intensity is not unlike that of Marina Abramovic.” Yet, whereas Marina’s intensity causes that artist to remain silent and immobile, such as in her recent show at the Museum of Modern Art in NY, Rosenthal’s intensity is dynamic.