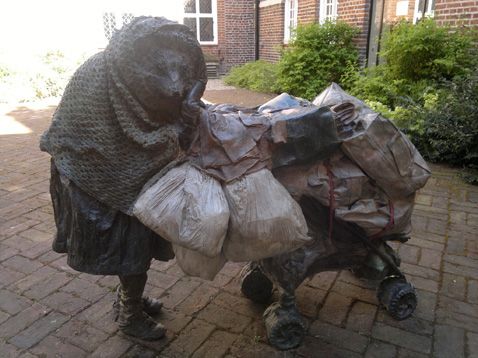 On Beastliness in Contemporary Art.

What is it about strange monsters and mythological beasts that compel me so? In an attempt to answer this question I visited the exhibition of over 25 highly acclaimed contemporary artists who in some way all incorporate fantastical creatures within their work. Set in the magnificently genteel Hall Place (just off the A2 in Bexley) the location provides the perfect contrast to ‘Beastly Hall’ a menagerie of artworks which are diabolically funny and vile at the same time.

Works range from the delicately beautiful drawings of Rachel Goodyear to the bold bronze vagabonds of Laura Ford. On entry one is greeted by the lifeless gaze of Damien Hirst’s cows’ heads. Their mortality is frozen in an icy blue soup rendered palatable by a chunky white vitrine which boxes them in. A pretentious title points towards the idea of mental illness, the work may be the ‘appetizer’ to the madness which is served up on the first floor.

The courtyard plays host to ‘Rag and Bone with Bag’ by Laura Ford. Two nomadic Beatrix Potter characters that seem to have hit hard times rifle through bins and push their belongings inside shopping trolleys, like victims of the triple-dip recession. This melancholic reflection on fairy-tale creatures is lightened by the glimpse of their trainer clad feet, as if to hint at a certain cunning stealth hidden behind the beggarly baggage.

From death and destitution the exhibition then elevates towards the more weird and decadent. On the first floor Thomas Grunfeld’s misfits play audience to Polly Morgan’s dancing cloud of pigeon wings. Taxidermy provides the most direct way for artists to conjure the uncanny from animals. Having tried it myself I know it is not for the faint hearted, and leaves the maker in awe of nature’s infinite and complex designs. It is apt then that the artist should choose to reassemble the limbs to produce impossible chimeras, celebrating the oddity of evolution.

Matt Collishaw’s work entitled ‘Total Recall’ fills the space with birdsong, emanating from three tree stumps stringed off in a corner. On close inspection one realises the rings on the stump are in fact vinyl records, and apparently the noises are birds imitating chainsaws. The title reminds me of Arnold Schwarzenegger‘s confusion at discovering his whole life was a fiction (in the 1990 film of the same name) and by association the work points to the illusion of reality and the sometimes misleading way in which we make sense of it.

The next room contains a broad mixture of works, one first sees Dorothy Cross’s silver ‘Finger crab’ which sits quietly on a black velvet cushion seemingly pointing a disapproving digit towards Carina Weidle’s ‘Olympic Chickens’. This ridiculous series of photographs made in 1993 are perhaps the prophetic visions of our current attempts to establish the 2012 legacy, that being a bunch of bulging, pimpled bodies attempting to hurtle themselves into fitness, post the year of sporting glory.

At this point I become aware of the running theme of humour in the exhibition, which a recent review suggested invalidates intellectual ‘posturing’ that might be derived from the work.

‘Does art have to be serious? Beastly Hall, an Artwise-curated exhibition of 26 of the most famous contemporary artists and their animal-inspired works, would argue not.….In a nutshell, a charismatic exhibition that aims to amuse, startle and unsettle.’

Although I agree that there is plenty of spectacle to enjoy in ‘Beastly Hall’ I do not think that therefore the art can be dismissed as light weight entertainment. For example Francis Alys’ ‘The Nightwatch’ subverts the high art establishment by releasing a wild fox into the National Gallery and recording this event via CCTV. The creature takes centre stage creeping from room to room, suspiciously sniffing the air, ignoring the paintings which become antagonists to his attempts to escape.

Joana Vasconcelos work ‘Flibbertigibbet’ presents an ornamental ceramic cat being smothered in crochet lace, as if the net curtains had become malignant and were infecting the pet. Surreal upheaval of the domestic, grotesquery and magical enchantment are found in many of the artworks including this cat. The show presents humour and a darker tension in equal measure.

I suspect that perhaps the reason I am drawn to beastliness is because I find it easier to project my own inner angst and feelings of unease in my own flesh onto animal forms rather than confront it directly. I identify with Charles Avery’s ‘Duculi’ two dogs trapped in a permanent battle to free themselves from their conjoined state. Struggle is also present in Tessa Farmer’s seagull being overwhelmed by an army of ants, in a scene reminiscent of Gulliver and the Lilliputians. From the drawings of Rachel Goodyear hang entrails which could be roots or smoke. Clearly visible within these guts are ghostly faces trapped in the movement of this enigmatic matter.

Repeatedly it seems the connection between man and beast is being made. Imaginary creatures allow artists to explore fantasy worlds, imbuing them with human characteristic whilst doing so. But in doing so the work is venturing into dangerous territory, the land of romantic sentimentality. As Steve Baker proposes in his book ‘The Postmodern Animal’.

‘Something of the aggression, something of the damage, something of the perversity inflicted on contemporary animal imagery is simply to keep it on the right side of that division between serious art and sentimental art, given a history in the 19th and 20th centuries of animal art being so overwhelmingly associated with sentiment’ Steve Baker, Cabinet interview 2001

Modern Art has been devoid of human and animal form for decades, as it conflicted with the minimalism and abstraction which dominated. Maybe as a jubilant reaction to this long dead dogma artists have started to play freely with this idea of beastliness and make works that dip into a mixture of emotions. Claire Morgan’s piece ‘Heart of Darkness’ embodies this conflict perfectly being made entirely of dead flies but structured on a Sol LeWitt-esque geometric grid. The synthesis of minimalism and beastliness in the artwork, mirrors well the savagery-versus-civilization paradox within Joseph Conrad’s novel to which the title refers.

The final room is alive with a mixture of bizarre creatures, what I realise here is how I am repeatedly being drawn to their gaze. A wall of paintings is awash with eyes that stare back at the viewer, from inside billowing clouds to protruding from fleshy bundles, it seems that almost anything has a beast lurking within it (if one looks close enough). Beyond there is a fox laying on an analyst’s couch and the skeletal remains of goofy, this confusion of curious remains refuses to reach a discernible conclusion. The ‘Beastly Hall’ exhibition presents a contemporary interpretation of our relationship to the kingdom of the beast, signaling perhaps a new era of art in which animals are treated as metaphorical gatekeepers to a deeper understanding of our existence.