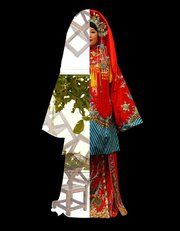 The concepts of nostalgia and the imagery that relates to it, is not a difficult subject for me to relate to as an artist whose practice explores postcards. While I tend to focus on the truth in the imagery rather than the nostalgic elements the postcard, like photography (family/holiday snaps primarily) and the home movie, is a visual medium that is tightly bound to memory and reliving past events. As such it is no wonder that photography and film make up such a large proportion of the artworks in this exhibition.

Nostalgia is a personal experience, so it could be hard to find it in the images of others. The Other in Me (2010) by Magda Biernat seems to question this assumption through an interesting mix of images of items and interiors that hold meaning for the owner, items that follow them where ever they go and that hold in them reminders or an essence of their homeland. It is possible to see this in the images even if the items portrayed have no personal meaning for the viewer, as we all have items that hold great sentimental value. As images they are aesthetically beautiful to look at en masse and unframed,yet well mounted with a weight and body of their own. They remind me of my own disparate collection of postcards and images on the walls of my room and their massive scale only adds to the power of the message.

The concepts of memory and nostalgia have great scope. The uniqueness of an event or the conflict inherent in it can produce some of our strongest memories. This may include relocation (voluntary or forced) both within a community and between communities, holidays (made even more memorable through the holiday souvenir) and other once in a lifetime events. It is no surprise then that many of the works focus on travel or the some aspects of moving between cultures. Modern easy and cheap travel has meant that it has become more of a norm to travel far and wide in search of work and our post-colonial world has left us with migrant populations far removed from their country of origin, some of which have tried to retain their culture and others that intentionally or unintentionally have formed a new cultures.

Chia-Wei Kung’s a+b=? (2009) shows us that no matter which culture we are from there are many things we share in common, from ornate traditional costume to gardening or drinking tea. Its use of imagery gives us a set of traditional and recognisable dress from Western, East Asian and Central Asian cultures, with corresponding actions of doing a particular task. For example the viewer sees three culturally different methods of marking the calender year, one of which at least they would recognise and so learn how the other cultures, represented by their traditional dress, do the same. The musical soundtrack keeps the momentum of the piece going and helps to focus you on the imagery.

Travel features prominently in Anna Lucas’ work Adrift (2004), not only through her choice of imagery but also in the way she shows it. Utilising three projectors the piece moves back and forth across the projections with different but related imagery. It has a strong narrative and also, much like Chia-Wei Kung’s piece seems to move between cultures, sometimes showing two or three different places doing the same thing. Visual and audio clues help to locate the individual images in a personal view of the world and clips are carefully selected to emphasise the idea of travel.

Interestingly the title Adrift would imply a traveller who has no fixed location in mind and certainly some of the imagery in the piece would suggest this kind of travel. However much of the pieces symbolism would argue planned and highly directed travel, images of birds and fish look at the idea of migratory populations that tend to have a specific final location. Equally the water imagery also recalls the idea of the water cycle a continuous and specific process of journey. Nevertheless a journey can be fluid, so maybe we should look at the title as a reference that even though there may be a destination in mind, there are many ways to get there and in this the piece becomes a metaphor for life.

Huma Mulji’s photographs seem to embrace the changes in modern Pakistan. Unlike the other works, this series is far more specific to one culture and the particular challenges faced by it. Her works are of personal interest mainly through the use of photo manipulation to fuse these desolate modernised urban scenes with aspects of tradition and the rural.

Mulji has inserted traditional cows or oxen into these urban scenes sometimes in improbable positions. These animals often have a humorous aspect to them and also seem to take on the role as observer of the changes the modern world has wrought. Housing Scheme (2008) has the oxen placed precariously on top of the building, curiously looking down at the building and detritus from the action of building. They also seem slightly out of scale, here more obviously than any of his other works in the exhibition. The oxen can be read in many ways, certainly as symbols of tradition and of rural life, their precarious position in Housing Scheme may indicate a certain fragility to traditional values and rural ideals in this modern Pakistan, their seeming curiosity and observance as tradition impacting on how modern Pakistan will develop, their out of scale size a comment on how much importance tradition has. Unfortunately the lack of framing or mounting takes something away from the power of the works.

The danger with an exhibition that tries to look at a topic as wide as this, is that even with careful selection and a specific take on the theme it is still very easy to show a group of artists who can seem disparate. The exhibition suffers somewhat from this, many of the artworks seem to fit into a thread that links them, however there are a few that lie on the outside. Even so all the works in their own way can be seen to reveal, question or create an illusion or disillusion of a place/time/people/culture or in short Beautiful Life. What it has done nevertheless for me, is reignite a desire to travel and added a few more places to my list, and as long as it encourages this in the viewer they may find out what these places are really like and if they agree or disagree with the artist. Although if this is ever possible is a different and complex argument.

Beautiful Life: Memory and Nostalgia is curated by Dr Ming Turner and developed by South Hill Park and De Montfort University in partnership with Charnwood Arts and Sin Pink Art Space (Taiwan). The show will be toured to Creative Hinckley Gallery in November 2011 and the Pier-2 Art Center (Taiwan) in April 2012.