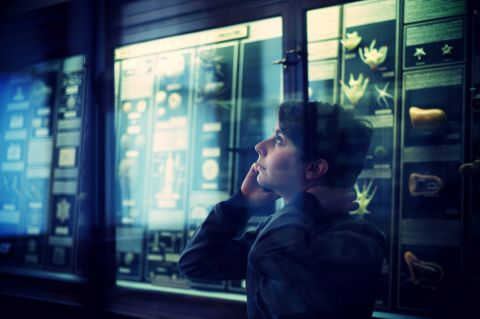 It could have been a bank heist, a kidnap or an urban chase. Instead it was a phone call to a melancholy woman who wanted to talk quietly about the thoughts and memories wrapped up in objects. At first, I was a little disappointed.

I’d come to experience Blast Theory’s new work Ghostwriter, commissioned for the re-opening of Exeter’s Royal Albert Memorial Museum (RAMM). Based on my recent visit to the group’s energetic, noisy show at nearby Spacex, I was expecting to participate in an edgy, hi-tech game. It turned out to be something a little tamer.

The Spacex show, which surveys documentation from the past 20 years, presents Blast Theory as accomplished games-masters with a keen curiosity about ethical and technological boundaries.

Though often exploring highly charged philosophical and political issues, Blast Theory rarely preach. Instead they allow the audience to act out innovative, rigorously planned game scenarios, combining real-world and virtual environments. It’s no surprise to learn that their name (and that of the Spacex show) is taken from Wyndham Lewis’s Vorticist manifesto, in which he favoured practice (blessed) over theory (blasted).

‘Blast Theory Bless Practice’ at Spacex includes documentation of a high-profile 1998 event, Kidnap, which invited the public to enter a kidnap lottery. Prize-winners were put under surveillance, then abducted and held for 48 hours. Just pre-dating the first broadcast of Big Brother on European TV, it raises similar issues of captivity, control and self-determination.

A Machine To See With (2010) – a phone-based work – encourages the listener to act out the planning of a bank heist to the point where guilt surfaces and adrenalin starts to surge around the body. At a time when the activities of investment banks have devastated entire national economies, the filmic trope of the bank heist takes on new resonance.

Meanwhile, Desert Rain (1999) mixes role-play, gaming techniques and video evidence to examine the way the mass media presented the first Gulf war. While the game itself is hard to grasp at one remove, the Spacex audience gets to share six video interviews that were integral to it. Emphasising the fluidity of ‘facts’ in a war situation, they feature a Gulf war veteran, an actor who played a soldier, a tourist, a TV journalist, a peace worker and a television viewer.

It can be problematic to understand site-specific, participatory projects through documentation, but Blast Theory have a snappy, polished way of presenting their past work that makes it feel immediate. Borrowing techniques from movie trailers, music videos and advertising, they give Spacex the atmosphere of a games arcade as numerous screens flicker and sound overlaps between the different works. It caused a kind of glorious attention deficit, leading me from one work to the next in greedy pursuit of the next sensation.

While Spacex offers a survey of the group’s past work, a visit to RAMM gives the opportunity to experience a new one. Ghostwriter may not feel as urgent and issues-driven as earlier work, but it faithfully continues Blast Theory’s exploration of mediated experience and its integration with the tangible here and now. It also demonstrates the group’s continuing drive to implant alternative behaviours (if only mental ones) in public spaces.

Accessed via mobile phone, Ghostwriter allows you to choose between a number of routes around the museum. A woman’s voice guides you through the spaces and offers her thoughts and memories relating to a number of the objects encountered. She also encourages you to leave behind your own account of a personal possession that has particular meaning for you.

I accessed Ghostwriter just after the museum had re-opened following a four-year closure for major refurbishment – and the place was heaving. The voice on the phone was sometimes difficult to hear above the general hubbub, but still managed to draw me away from the hectic present. I was conscious of being in two worlds – maybe more. Sometimes the voice talked about another building altogether, overlaying descriptions of rooms and objects in her home(s) that were similar to, but not the same as, what was in front of me.

As well as hinting at the presence of the past – the people and things that hover in the strange, unstable realm of memory – the title Ghostwriter suggests one person standing in for another, forming their narratives for them. The voice encouraged me to imprint my own imagination on the museum collection but she will also continue to haunt it with hers.

The disembodied voice is disconcerting: part convincing fiction, part automated call-centre message that will start repeating itself if you don’t obey. In fact, the whole work is slightly reminiscent of a gallery audio tour. I find myself asking whether it’s different enough from mainstream interpretative material and whether it couldn’t have challenged more directly some of the ideologies that underpin museum collecting and display.

That said, it makes an interesting contrast to the manic atmosphere at Spacex. Blast Theory’s departure into the gentler, more contemplative Ghostwriter is evidence of their readiness to apply their rigorous, inventive practice to new, less urban contexts. If this change of mood confounds expectations, well, so much the better.

‘Blast Theory Bless Practice’ continues at Spacex until 18 February 2012.
Ghostwriter is available at RAMM until June 2012.