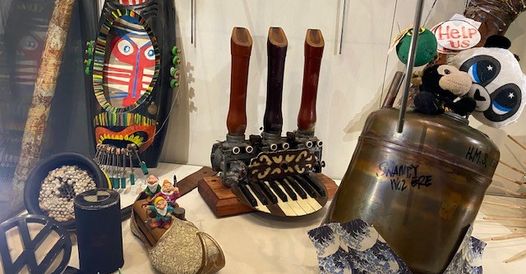 The extraordinary Italian polymath Umberto Eco suggested that Wunderkammern, private museums, may have originated in the Roman and Hellenistic eras or, more likely, with medieval lords keen to securely house their treasure, however dubiously acquired. Certainly, during the German baroque period, the phenomenon became increasingly prevalent with fantastical ephemera sitting unquestioned alongside genuine, historical artefacts.

There is most definitely a sense of a similar, straightforward presentation in ‘Cabinets of Curiosity’.  There are no frills here, no elaborate explanations, just great stuff in glass cabinets – no hierarchy – a piece of what we might deem ‘Fine Art’ carries the same weight as a Kung Fu Panda toy, and a copy of an Ice Age axe, thus recalling Eco’s delicious juxtaposition of the horn of a unicorn and a copy of a Greek statue.

Bear in mind that we have entered a museum set, as many are, in a picturesque park.  This develops a particular mindset, one of enquiry but also of reverence, for the building, for the exhibits.  It calls for behaviour of a standard.  No-one has wandered in here by accident, mistaking it for a branch of Costa.  ‘Cabinets of Curiosity’ becomes a micro-museum, a singular world within a world.

The room is intimate – low light makes the flickering screen catch the eye.  A performance of contemporary dance is playing out.  It is tightly and impressively choreographed, almost magical were it not for the creeping realisation that the setting, the open structure of the bandstand, lies just beyond this museum’s walls and the light precipitation that animates the edges of the screen.  It simultaneously takes us to an enchanted garden, into a Poussin painting or Greenaway film, perhaps, and to another rainy day in South Yorkshire, where we stare at a bandstand and remember concerts and project idle thoughts.  It never rains in Disney’s dance sequences. Fantasy and reality; imagination and the hard fact of soft rain.

The spellbinding charm and the fourth wall is broken by cutting to a more prosaic scene of one of the performers blithely eating an apple.  She sits amongst assorted props from the performance, which foreshadow what else we will see in the exhibition, subtly and intelligently setting the tone, engaging us and putting us in the right frame of mind – everything we see from now on will suggest other things. They can be carefully considered or merely allowed to float past in blissful reverie.  We have not been looking through a window into the park.  We have watched edited footage and now wonder what happened in between the performance and the apple-eating, or was that also somehow performative?  What has been omitted? What else lies, as we used to say, on the cutting-room floor?  It’s a fabulous and thought-provoking work by Neath Champion-Shorr.

As we leave the TV behind, the first cabinet houses the work of Kevan Cadman.  It has three levels.  On the top, two carved stones look far too heavy for their glass shelf.  There is tension.  Our expectations are for some accompanying information, a card telling us when they might have been created, where they were found, and what purpose they might have served.  There is nothing, which is intriguing.  On the middle shelf is a plaster-cast mask, with a hint of death mask about it – did we see that in the film? – as well as two sepia-tinted photographs (purportedly) of the man who discovered the stones.  His moustache is thick and lustrous, unnaturally lustrous. And, thinking about it, the photo is too sepia, almost as if… The deception is thin and hilarious and superbly staged.  This is fake, it exclaims.  It had us, for a second, because of the play with our conditioned response to this situation, gently manipulating us with clever use of context.

As discussed, in the rudimentary museums of yore displays consisted of unconnected objets d’art.  Ken Horne has taken this idea and ran with it, and ran with it, and there’s no catching him.  His cabinet is a gloriously diverse manifestation of consumerism, art and global cultures, high and low.  It is, in turn, celebratory and poignant, a commentary on the quirky nature of contemporary existence – mundane and menacing in equal measure – a product of a vivid, playful imagination and a thirst for collecting.  We can identify some things, providing the warm feeling of recognition, like remembering the answer to a difficult question in the pub quiz – the iconic VW badge recalling the middle-class rebellion of the Beastie Boys in the late ‘80s; a ragamuffin gang of plastic animals congregating to march to who knows where; chocolate money to symbolise capitalism and the obesity crisis.  And there’s a hybrid musical instrument that only Ivor Cutler could make work.  Of course there is.  Some of the objects utterly defy description, while others harness the Warholian power of the ordinary and everyday.  Allusions abound and we must make of them what we will.  It is neo-Surrealist, Edward Lear nonsense and all the better for it.  It is Postmodernism in its very essence, a scintillating ensemble of the hand-made, found and repurposed, designed to signify everything and nothing.

The next cabinet is an altogether more sombre affair, much-needed respite after our recent peyote-fuelled rocket ride through space and time, the calmness epitomised by a beautifully-preserved turtle, a creature that will never be hurried. The cabinet is a scuba dive, a dreamy swim in crystal clear water amongst the anemones and urchins of the deep sea.  For those with little aquatic acquaintance it is a treat to be able to study these forms of life closely.  Television’s thin brightness allows us to see them in action, but this is how we mainly experience exotica in three dimensions. Give thanks for museums.   In response to his selections from the Museum’s collection artist Paul Evans has added his own hand-crafted replicas of this phylum. Playfully-constructed, with little attempt to conceal the artifice, they feel like lovely keepsakes.  Pester the gift shop to stock models of Paul’s models.

It seems only fitting that our next encounter bears no relation to the previous one – another point of difference, another entry point, something that will resonate uniquely for spectators.  Teresa Sayner’s patterned dress is displayed on a tailor’s dummy.  It fits immaculately.  How we take such skill for granted – designing a template, cutting, stitching and forming.  Not being encased, the dummy implies presence, standing mute, invigilating the gallery, but the dress denotes absence.  The lack of information may be briefly unnerving, but only because we are so used to being spoon-fed what we are meant to think.  This though gives us the space to ponder, to admire the handicraft, study the intricacy of the pattern derived from Rockingham Pottery that Sayner researched in the Clifton Park archives, the quality of the fabric, and to create our own stories, recalling the Pablo Helguera cartoon in which one gallery visitor remarks to another, “I was beginning to like this painting until you began to explain it to me.”  The meaning almost always lies within.

There is something pleasingly disconcerting about viewing paintings in a glass cabinet. We are each familiar with the act of looking at a painting, usually on the wall of a gallery or private residence, so as we approach it we notice its surface, its bumps and ridges and its glossy finish.  Indeed, leaning over red ropes without alerting the guards is one of the things that make life worth living.  This new context, however, encourages the embracing of a new adventure – painting as object, and one of desire.  It is real but not in a gallery.  Neither is it the image on a phone, the current means for consuming content, cultural and otherwise.  There they sit, on a glass shelf, presented as articles of some historical substance, Uzma Rani’s sumptuously-textured paintings of pink blossom and roses, like details from a hitherto unseen van Gogh study – paint luxurious, with hints of gold amongst the vivid pinks and rich reds.  Hooray for painting!  They are a celebration of Spring and new beginnings, a feeling enhanced by a smattering of ornamental butterflies, harbingers of warmer weather.  It seems to be about joy.  The cabinet also features Teresa Sayner’s painting inspired by the Centenary Beech in Clifton Park – the resonances between the two artists work, united in a colour palette clearly came from conversation between the two artists, a gentle, organic collaboration that underpins the whole project.

As we leave the room we face the final cabinet, just across the narrow corridor, and it stands as a worthy climax to what has gone before.  An old typewriter, possibly from before the days when people used phrases like ‘cutting-room’ floor, is presented as an object to be admired, a venerable antique.  It is surrounded by crumpled balls of paper, remnants of rejected writings, perfectly capturing that universal feeling of frustration, illustrating the torment of the creative process. Yet, in this frozen moment, the finished version of Tair Rafiq’s poem has emerged triumphant from the typewriter, its forebears lying at its feet.  The battle was won and the machine has proved it can still fulfil its function despite its great age.  It is elevated beyond a ‘Fountain’, a repurposed objets trouvés displayed for our delectation. This is classic design amongst a musing on the nature of narrative, and a powerful reminder of poetry’s ability to sow seeds.

This is a delightful exhibition, curated so thoughtfully and with a refreshing sense of fun, challenging conventional definitions of Art.  The strategy of using the glass cabinets brings just enough coherence to a presentation of diverse creative practices, different ways of making and thinking.  It is all the good things about Art – engaging, entertaining, intriguing, profound and mischievous.  Visitors can choose to wallow in the merry maelstrom of visual stimuli, revel in all the ideas or interrogate each item within an inch of its life.