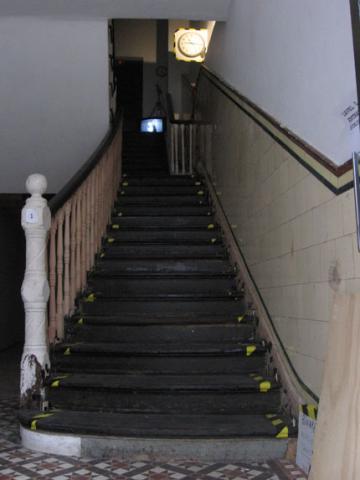 "Come inside and play with the time machine" read the door sign … surely a bold enticement to holiday makers expecting little other of this seaside town than the Pier’s myriad charms. But, for a week or two this summer Hastings hosted an unexpected and pleasurably eccentric take on the science and magic of light transmission. Home to John Logie Baird’s earliest forays into televisation, Hastings is a fitting site for a digital festival, now in its fifth year and boasting an extensive program of film, exhibitions and events. ‘Can We Break the Speed of Light’ featured ten installation and projection works unfolding through the Claremont Art Space – a converted YMCA that is a hub for the Hastings arts scene.

Simon Hollington and Kyp Kyprianou’s work ‘Forgive Me Newton’ provides the centrepiece for the exhibition – and the so-called time machine referred to at the door. Commissioned specifically for the space, the piece extends their ongoing practice of tinkering with scientific history and dubious fact. Climbing the central staircase triggers an erratic passage of time marked through a modified clock. The audience’s tread deliciously triggers the rotation of an unreliable second hand with its amplified tick tock replacing each footstep. At the top a black and white TV monitor broadcasts your climb in delay – an ingenious slippage of time and the space travelled through. The piece sets the tone for the show, playful, clever and with a nod to the ambiguities that accompany the recording of history.

Three works refer to painterly tradition in their execution. Eva Rudlinger’s ‘The Beam’ is a luminous wall of grey pierced by an unstable column of light – tracing a sunbeam’s path. In its incandescent vibration the image references Rothko’s colour field paintings in their calm shimmering abstraction, and crafts a contemplative bay within the exhibition. Thorsten Knaub’s ‘Woman Sitting on Bench (Summer)’ is a more literal reference – the surface of the work an impressionistic monochrome painting of an urban street. Resting on a bench a projected woman waits, making slight movements that reveal her as a ‘live’ intrusion. This moment of colour and gesture brings to the work the elemental force of time and its passing. Mobile phone LCD screens form frames for Simon Jaque’s ‘Storm’ – miniature windows onto the grandeur of a tropical storm. Jagged lightning illuminates dark vistas that in their static perspective recall the traditions of landscape painting and photography. However in their highly pixellated rendition it is both technology’s ambitions and limitations that are brought to mind.

Paul Grimmer’s ‘33.3’ sits somewhat uneasily amongst these meditative spaces. Three monitors front one another in an eternal power triangle of aggressive fists punching out an intense game of Scissors Paper, Stone. Although the work would have benefited from tougher sound reproduction, the viewer is nonetheless uncomfortably absorbed within this muscular conversation.

Downstairs, the basement gallery housed projection-based works including Fiona James’ potent reworking of the screen in ‘The Tree Collector’. Footage of a 16th century arboretum is shot reflecting from the bonnet of a speeding car and projected onto a slick of engine oil. The pervading stench of blackened oil and the soundtrack of crunching gears all combine to highlight the schisms between the persistence of nature and man’s obsession with advancement. This theme was reflected also in Danny Pocket’s ‘Birth of Reason’. A split screen view of the seascape is punctuated by the ubiquitous plastic shopping bag buffeted in a stormy wind – a kind of kinetic Rorschach’s blot. The strength of the work was its soundtrack, rising from jittery guitar chords to the crescendo of a choir in full blast, creating an almost sacred space for the universally familiar detritus of civilisation.

Russel Webb’s droll ‘Several Billion Years’ harked back to the birth of the universe, as a seething black mass absorbed constellations of stars into its dark heart. Slowed interminably, the magnetic attraction of particles to the centre takes on a universal quality – that is revealed as reversed footage of an effervescent tablet dissolving. The amplified fizz of the tablet’s demise forms a fitting soundtrack, distorted to recall the static clicks of recorded space.

‘RGB’ by Matthew Miller consisted of three circular screens of photo luminescent paint (in the red, green, blue of the title) framing film of an event explored from different perspectives. Whilst an effective presentation, the footage was overly obscure – a narrative alluded to but not quite carried through. Claudia Mosely’s ‘Projection Cluster’ took the theme of light to its literal heart. Redundant projectors stripped to their bare mechanics projected beams through discarded lenses. More aesthetically engaged than conceptual, the piece takes on the history of projected light and the paraphernalia of its machinery.

Curator Emilia Telese has produced a thought-provoking exhibition that clearly demonstrates the increasing quality of regional shows. Hopefully ‘Can We Break the Speed of Light’ will find an opportunity to tour – to travel on through space and time.

Fabienne Nicholas is a freelance curator and writer based in London, currently project managing public and media art commissions for consultancy Futurecity Arts.