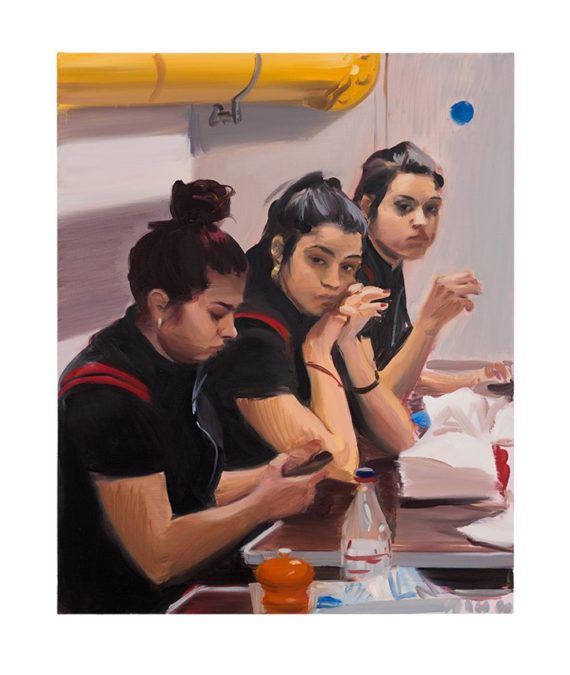 There is a degree of substance to the aphorism ‘every picture tells a story’. Even in the case of abstract art, apropos the evolution of art and its liberation from the informational imperative via the lens. With this freedom, the relationship between contemporary art and narrative got more complicated. Art education helped muddy the waters further by separating out ‘Illustration’ and ‘fine art’. The latter being arguably the most non-definitive classification known to mankind.

As subject matter, the ‘story’ of everyday work, as depicted through drawing and painting, is rather lacking in contemporary art and in the history of painting. Prior to the likes of Millet or Courbet and rare exceptions like Brueghel, ‘ordinary life’ was less likely to be the subject of art than say wealth, power or religion. Even from the 20th century onwards (outside of socialist iconography) working life has been largely the province of the lens. Why painting failed grasped ‘work’ as subject in the way photography did is curious. Maybe it didn’t provide enough escape from the mundanity of life. Or maybe because it didn’t create the necessary break in tradition required to be considered ‘cutting edge’ wherever or whatever that may be?

This show of Caroline Walker due to take place at MAC, re-scheduled due to Covid 19 is a wonderful exception to this. Due to launch April 4th the exhibition encompasses a substantial body of paintings showing women working in a variety of work places. These include; tailoring, nail bars hotel housekeeping, retail and other ‘ordinary’ roles. Writing without a list of the exact works, I have picked a couple from her website to focus on.

Three Maids 2018 is a close up painting of three girls sat on a break from their domestic jobs in a hotel. Wearing black tabards, two of them glance across in the direction of the viewer. A third glances down at her mobile. They look bored, knackered and uninspired. The room has a bland functionality about it. The painting itself is fairly loose, but close to nature in both colour and depiction. Like much of her work there is a strong sense of voyeurism about this piece. I find myself looking into another world or rather an aspect of ‘our’ world, just outside of my little world. Whenever one stays in a hotel, there is always an uncomfortable truth lurking, in that one’s comfort, is being serviced by someone else’s discomfort, working in a notoriously low pay industry. By focussing in on their flattened expressions, Walker creates a powerful visual paradox for the viewer. On the one hand one feels admiration of her skill as a painter, in rendering such an everyday moment with humanity. On the other one feels disquiet, as a stark reminder that work for many is neither emotionally fulfilling nor well paid. Just sheer hard work.

In another ‘Corridor, 3rd Floor’ a hotel domestic worker is depicted lugging a vacuum across the carpeted corridor outside a guest room. In front of her a trolley stacked with cleaning materials and dirty laundry, behind her folded sheets and towels ready to be placed. The visual starkness of the transitional space is emphasised by the use of heavily emphasised shadows and reflections from the overhead lighting. The woman is looking downwards and this builds on the sense of relativity between the paying guest and the domestic. The brush work is selectively loose, with keener tighter attention given to key aspects of the image, like the crisp highlights which emphasise the laundry trolley and cleaning equipment. From a semantic perspective this pushes the notion of the worker as person down the hierarchy of value. In many historic portraits the artist would languish detail on the person and their face in specific to show their position and status. Here the worker clearly has a face, but the individual is not the focus for me per se. It is much more about the continued relegation of many women to poorly paid jobs to service the needs of those who are better off.

This exploration of woman and work extends across an impressive body of paintings by Caroline Walker. They are stunningly well executed paintings in terms of line, tone, gestural marks, colour and composition. They are exceptionally powerful activators of socio political narratives pertinent to the here and now.

That Millet was moved to make the painting ‘The Gleaners’ in 1857 was one thing. A great painting of women struggling to survive, in a cruel unjust capitalist world, albeit by a male artist. The fact that Caroline Walker is moved to depict women, still struggling to survive, in one of the richest countries in the world, some one hundred and sixty years later is both extraordinary and impactful on many levels. This art brings sharply into focus the ‘inconvenient truths’ of capitalism. These are both wonderful and uncomfortable works. All the more so because as an act, painting is inherently ‘human’ in its approach. When you apply this ‘human act’ to telling the story of low pay, gender and the imbalance of power and privilege of some over others, it is an incredibly potent combination. I cannot wait for the opportunity to see some of this work in the flesh. It strikes me as important on many, many fronts.

This writing was Supported by a bursary from a-n The Artists Information Company and Arts Council England. It is the third in a series of five ‘reviews’ on shows cancelled or postponed due to Covid 19