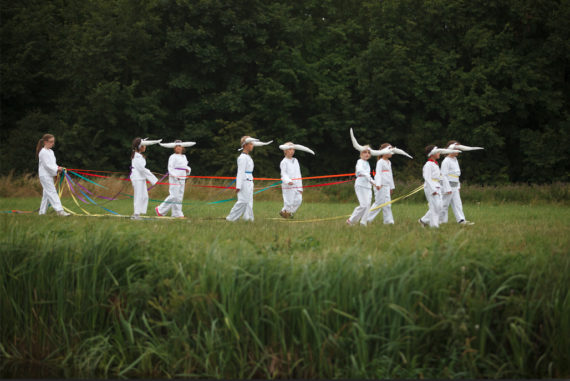 It’s a July evening and a dozen of us are crowded into a small river boat on the Great Ouse moored on St Ives’ quayside. As the motor starts up and we begin to head upriver towards the Hemingfords, artist Caroline Wendling warns us of the difficulties and perils of travel. Hoods and hats are pulled tighter, seats in the covered section of the boat are negotiated and someone tests an umbrella against the wind. Wendling’s words of warning are an introduction to the myth of St Ivo and his mythical journey from Persia to Cambridgeshire centuries ago, but here have a resonance closer to home as months of preparation are put to the mercy of a British Summer. “If it starts raining again, I will no longer believe in St Ivo”, Wendling jokes.

Though details about the life of St Ivo are scarce, belief is important to Wendling and her methodology. A coffin found in the village of Slepe may have contained the remains of a saint, and this saint may have been the same person as an Ivo from Persia. Shortly after William the Conqueror’s Domesday book, Slepe was renamed after the dead saint. Just as these fragments were once seen as solid enough to serve as foundations for the settlement’s new Norman identity, they are the materials from which Wendling weaves a complex project blending local history, folk tradition, storytelling, theatre and participation.

The “floating walk” co-opts a local tour boat service to take us under St Ives’ chapel Bridge — one of only four in the country and where mass is held at 10am on the first Monday of the month—, past Holt Island nature reserve and a disused train bridge and in a loop around the Ouse’s tributaries. These landmarks act as cues for Wending as she traces the history of St Ivo and the town and also as staging posts for performances responding to the narrative: a lady in a long dress hands down a basket of provisions from the chapel, a unicorn appears in the reeds and a drumbeat announces a group of school children wearing ox horns as they enact a “ploughland”, a unit of medieval measurement for an area of land that could be be ploughed by a team of eight oxen. As we approach St Ives on the return leg we are diverted into a tributary that rounds Holt Island. Through the mist we can see a white shirted figure playing a droning Sardinian triple pipe. A few of our passengers recognise him as Barnaby Brown, a musician and researcher into ancient instruments and music.

In such a context, appearances of a seal, kingfisher, heron and other wildlife take on surreal quality reminiscent of the moonlit boat ride in Charles Laughton’s Night of The Hunter, 1955. Like that film’s evocation of childhood dreams and nightmares, the floating walk is informed by children’s responses to the myth of Ivo. Throughout her narrative Wendling is careful to remind us that these “floating walks” are only the culmination of a larger project that involved working closely with Year 3 and 4 children at Thorndown primary school and teams of volunteers on aspects of the production. At the beginning and end of her work with the children, Wendling asked them whether they “believed” in St Ivo. Belief in this way helps re-materialise a myth and asks what it means to travel and what it means to migrate. Though Wendling makes no explicit reference to political issues such as the refugee crisis or the EU referendum (the next town upriver, Huntingdon, saw anti-polish cards distributed on the day of the referendum result) the floating walk gently connects the mythic past of Ivo with the contemporary through these strategies and through simple props and devices. Tea, pastries and orange amphora-aged wine are served at key junctures, making the Persia of Ivo accessible through modern-day Iran and a market stall in Cambridge.

Late last summer in her studio, Wendling, whose practice often draws on walks and other kinds of journeys, shared with me a Baudelaire poem “L’invitation au Voyage”, written at a historical moment when the steam engine and its application in boat and train design had fundamentally changed our understanding of time and space. Within a few short decades, the surface of the earth had contracted to soften and normalise “expeditions” into “travel” or “tourism” and to bring about the accelerated circulation of first goods then people. Remnants of this historical turning point are noticeable on the boat trip, from the remains of the railway to the touring boats themselves, established as short range accessible forms of leisure for a growing middle class and a working class with a newly protected weekend. The form of the floating walks also evokes pre and proto-cinematic attractions from this time such as Hales Tours, Dark Rides and Ghost Trains, which all played with the pleasures of a body moving through space and the thrill of bringing the exotic up close. By evoking these three temporalities and bringing them into contact, Wendling explores the shifts in how we might understand a journey like Ivo’s: from a source of fascination in the Middles Ages, where someone who had made such a trip could have a town named after them; to an exotic part of the new reality in the Age of Railways and Leisure; and finally to a source of fear in an age when we are told we are at “breaking point[1]”.