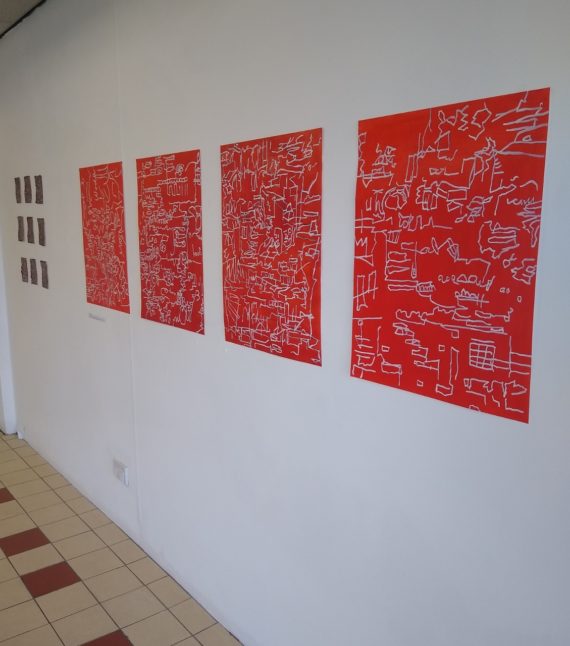 Thrilling and dangerous in equal measure, the city is rich matter for creativity – a multi-layered organism demanding a response.  Jane Walker’s fascination with the subject compels her to harness its essences and make manifest her feelings.

‘City Lines’ at Sheffield’s Fronteer Gallery is a body of work that has evolved, like a city, over the last few years.  A number of the paintings have been re-worked, with earlier iterations still apparent, leaving clues of an archaeology of painting activity.  As we continue to dig we uncover fragments that could be from Schiele or possibly Klimt amongst the strata.  The resultant grey leaves us in no doubt that we are in the heart of a concrete jungle, with these palimpsests of documents as our guide.

A pair of works that fall under the artist’s bracket of ‘Slow Lines’ are visually the most complex in the show, making adept use of packaging paper as its substrate. The simple, fragile lines of ink imply a view of buildings, and the printed images on the found paper recall the advertising billboards and screens so prominent in our city centres, battling for our attention and disposable income.  So we are thrown into contemporary metropolitan living – a bombardment of partially obscured, random images and dizzying movement.  This feels like a beautiful, poetic representation of a memory of standing amongst the mayhem of a crowded Piccadilly Circus.  This may be an example of how photography would fall short in recording such a specific, nuanced experience.  When Walker takes us by the hand it comes with a whispered warning to be careful out there.

In the pieces on paper, the artist subtly harnesses the qualities of the materials, allowing thin paint to stain the surface in the grand manner of watercolour painting.  This action initially serves to break the tyranny of the blank page and steers the next stage, which appears a delicate balance of very particular decision-making and faith in intuition.  There is tangible warmth here – a quieter part of town, perhaps.  The city, like a painting, is made of areas of high activity and its municipal parks, places to catch your breath.  Walker clearly loves belonging here, yet remains able to compile a critique of the occasional disconnection that occurs in her surroundings.

The most eye-catching work on display is a series of four pieces, also under the category of ‘Slow Lines’.  Thin lines of white oil paint suggest a range of architectural forms.   These are intriguing to decipher as some describe a windowed multi-story, whereas others are more nebulous, implying buildings under construction or being demolished.  All the while, the lines remain very definitely ‘paint’, reminding and reaffirming that we as spectators are simultaneously engaged with both an art piece and an interpreted narrative of navigating the city.

The marks Walker makes bear close analysis.  They can be interpreted in several ways and are therefore highly engaging.  They could be an attempt to replicate movement – of traffic, obviously, but also of electricity and the information superhighway, particularly in the pieces the artist classifies as ‘Fast Lines’.  The lines, be they controlled, painterly or sgraffito, could be read as shorthand or an adapted, highly-personalised form of hieroglyphics.  Maybe they are, like graffiti, a primal statement of presence, a desire to be seen or acknowledge one’s own existence amongst the chaos – self-expression, etched gestures within the confines of Painting – so that the thing produced is an amalgam of controlled rage, skill and patience.  To physically cut into one’s own work is quite a powerful statement to make.  There is certainly a faint echo of Mark Tobey’s automatic writing, flickering and fluid.  It is testament to a rigorous practice and vital mind that the artist finds so much variation within strictly set parameters.  We can assuredly identify a piece by the artist without feeling as though we have seen it before.  The marks are enough alike to present a most coherent proposition.

The exhibition is a concerto in three movements – a different tempo and timbre within each, but still clearly part of a greater structure.  Walker has given us enough enigmatic variations to encourage, and greatly reward our scrutiny.